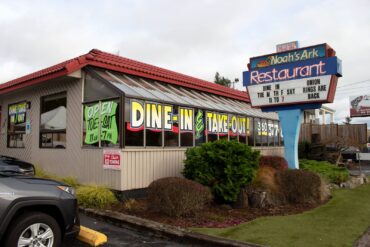 When the doors open at 11 a.m. at Bremerton’s Noah’s Ark Restaurant, most weekdays there is a line of patrons waiting to get inside, place their orders and sit down for a hearty lunch. With the Navy yard lunch period starting early, regulars know they can get a quickly prepared, delicious meal and be on their way.

In addition to the fragrance of grilling meat and french fries, a noticeable feature when entering Noah’s Ark is the sparkling cleanliness. The counters, tables and booth upholstery fabrics shine. Signs on the tables ask patrons to buss the tables themselves and to turn the sign over to indicate the table is ready to be cleaned. When the staff member finishes sanitizing the table and seats, the sign is flipped over, stating the table is now ready to be occupied.” Cleanliness is not negotiable here,” says Bianca Garguile, operations manager. “If the front of our house is spotlessly clean, our customers know our kitchen is also.”

Noah’s Ark has been a landmark and icon for Philly cheesesteak sandwiches since 1972. Entrepreneur Ralph Nicolas “Nick” Garguile decided the diner next door to his grocery store, the Midtown Market on 6th, would be a perfect place to serve up the sandwiches, which he missed since leaving his hometown of Philadelphia. The U.S. Navy brought him to Bremerton, where he met and married the love of his life, Kay Winger.

Garguile took over the ownership of his father-in-law’s business, which was named “Noah’s Shop Rite” and later became the Midtown Market. When it came time to name the diner, he honored the name Noah and added Ark, which symbolizes a place of gathering. In 1974 he gifted Noah’s Ark to his son, Nick Garguile, and new daughter-in-law Janet as a wedding present.

The couple have run the restaurant, raised their children and grown the establishment over the past 47 years. Now in his 60s, Nick Garguile still comes into the diner and cooks on a daily basis. Janet Garguile manages the human resources and takes care of the bookkeeping. In addition to daughter Bianca, the operations manager, daughter Grace also works at the diner. 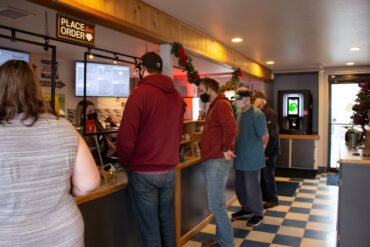 Although many changes have taken place over the past 47 years in the building itself, the basic structure of the food service has not changed. Originally a drive-in with car-hops, the business became a walk-up diner offering counter service, with picnic tables outside for patrons to sit while eating.

Eventually, the front of the building was closed in to provide an indoor dining space. There is no table service, and customers who are eating in are invited to go into the bright, airy space furnished with booths, tables and chairs to wait while their orders are prepared. Those who are waiting for takeout mingle near the pick-up counter until their names are called. 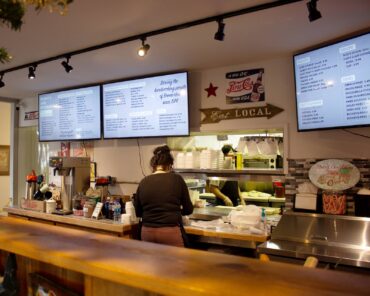 The dining area is decorated with long shelves up near the ceiling, laden with “Noah’s Ark” ceramics and other artifacts. Mostly teapots and cookie jars, the collection spans generations and artistic styles. At the front counter are a few more specialty Ark knickknacks and an early photo of Nick and Janet Garguile.

Remaining true to its roots, the family is well established in the community of Bremerton. They all enjoy serving their neighbors who are longtime residents as well as those who come and go as the population of the Navy yard ebbs and flows. 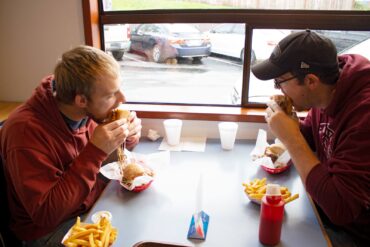 Local residents, many of whom settled in the Bremerton area after finishing their service in the U.S. Navy, have raised their families in the area. As generations return home for the holidays, they visit Noah’s Ark not just for a meal but also for the memories made here.

The diner serves as a taste of home. While much of Bremerton has changed over the years, Noah’s Ark and the family who own and operate it continue the tradition.

“We know who we are and who our customers are. We are a hard-working community and we don’t need to be fancy,” Bianca Garguile says. “We just need to offer tasty food in a friendly atmosphere where everyone feels welcome.” 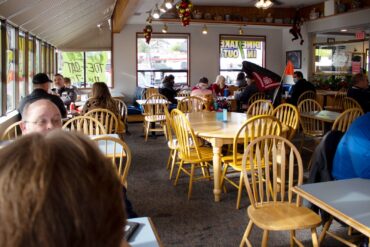 The family feels that one of the highest compliments paid to the restaurant is when a young Navy sailor stops in for a Philly cheesesteak sandwich and says, “This tastes just like home.”

Noah’s Ark has received many “best of” awards over the years. It’s rated No. 1 in Bremerton for “quick bites” by Trip Advisor and constantly receives 4.5 stars. Yelp also carries dozens of rave reviews, with comments on the deliciousness and quality of the sandwiches, along with the friendliness and efficiency of service. 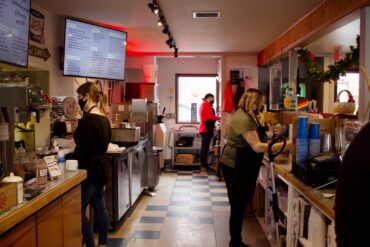 The goal of the Garguile family is to always provide a consistent, familiar menu to customers. They pride themselves in efficiently getting out meal orders as quickly and accurately as possible. While their tagline is “The Home of the Philly Cheesesteak,” they also serve a full array of burgers, sandwiches, hot dogs, fish and chips, soups and salads. Milk shakes, malts and fountain drinks are also available, as well as tea and coffee.

Every item on the menu is made from scratch and cooked to order. The kitchen buys large steak cuts, then slices and grills them daily. The dessert menu features brownies, cheesecake and ice cream sundaes.

Bianca Garguile says, “When asked if we are a fast food restaurant, we say no — we are a restaurant that serves good food fast.”