An Urban, Contemporary Home and Garden on Morgan Hill 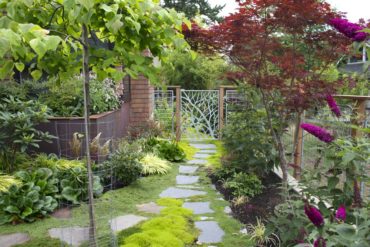 John and Suzanne Pitts bought a small RV and traveled six months and 16,000 miles through the Western Territories of Canada and Alaska in 2013. At the same time, they were researching a new place to build and settle down for what might be called a second retirement. The Pacific Northwest was tucked in the back of their minds because they started their construction business in Bellevue in 1977 before returning to southern California.

The couple lived on the bay in Newport most of the time but over the years, they’ve had 32 different homes: sail and power boats, a “rock star bus,” mountain cabins and ski lodges, desert condos, Montana acreage and a historic cottage on Balboa Island that they remodeled. 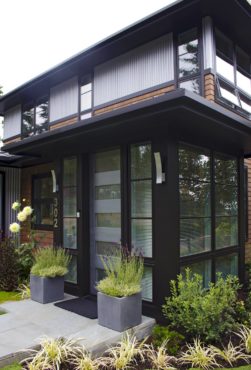 Suzanne Pitts says their goals for their new Port Townsend home were to simplify daily life and maintenance, eliminate clutter and expand the open spaces, similar to an art gallery. Certainly, the paintings and drawings they collected throughout their travels bring zest to the interiors. Several sculptures show their sense of humor, while a garden wind sculpture reminds them of their California home. 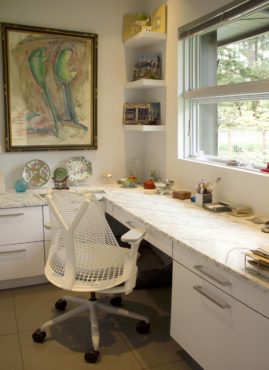 They lived in Belltown in 2015 while John Pitts’ concepts were turned into working drawings with the assistance of Port Townsend architectural designer Guy Hupe. Pitts says Hupe was a marvelous collaborator and put them in touch with great people in Port Townsend. QED Builders undertook the yearlong construction and the Pittses moved into their new home in January 2017.

The home tour begins in the lush garden, where repetition and restraint are managed with the same sure hand and laser focus found inside the home.

A low, galvanized-steel-grid fence runs well inside the corner’s property line with a mass planting of autumn moor grass between it and the street. A gnarly apple tree saved from construction sits inside the fence, along with small-scale ‘Fireglow’ and ‘Green Cascade’ Japanese maples. 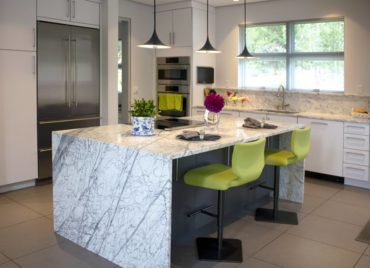 Stripped-down, this home resembles a two-story cube. However, the architectural control of siding-material placement and a small, pushed-out kitchen wall soften the underlining shape without losing any of its strength. For instance, three black metal, hip roofs — on the main house, stretched over the front door and kitchen windows, and on the oversized garage — create a compact profile and add a soothing rhythm.

Brown shingles climb two-thirds of the exterior height to a black band that grounds the corrugated metal siding. This magical material reaches for the dark eaves and becomes almost transparent before the black roof settles the whole. The silvery metal also wraps the lower level’s push-out and becomes a foil for the garden. Already, the theme emerges of marrying substantial forms with more delicate, transparent ones. 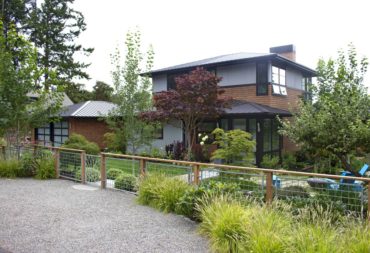 The front door is an unexpected surprise: It is a Dutch door. They lived in a walking neighborhood where Dutch doors were inviting to neighbors and protective of the homeowners, and opened to sea breezes. It also keeps their two dogs, Guinevere and Lancelot, corralled.

The entry hall, starting with the door, sets the tone for the home. With five horizontal panes of translucent glass, it repeats wherever there is a door but frankly, there aren’t many in this home.

Restrained interior finishes, repeated details and a palette of grays melt each area into the next. Gray Spanish porcelain tiles on the floor form a subtle, structural 2-foot grid. The walls and baseboards are separated by a 3/4-inch inset, a detail called a fry-reglet reveal that creates a room-defining shadow line 6 inches off the floor.

When that detail is repeated at the top of the wall, the 9-foot ceilings appear to float. A flat edging on the ceiling is a refined finishing detail. Altogether, the effect is ethereal and calming.

Windows meeting in interior corners invite light in from two directions and create a sense of transparency. Vignettes of gardens, trees and the straits bring the outside in, adding color and texture. Windows are covered in narrow slatted blinds for privacy and light control.

The living and dining areas share space in one perfectly proportioned expanse of openness and light. The minimalist, solid living room furniture centers on a propane fireplace near one of the corner windows. Another example of the substantial combined with the delicate shows up in the transparent, jewel-like dining table and chairs that sit at the intersection of two exciting architectural features.

The first feature, the stairwell, is what the couple calls the “stair-tower.” Light pours in from corner windows that rise from the floor to the ceiling of the second floor. Substantial treads wrapped in bamboo are supported by a double metal spine set 4 inches apart and welded to inset plates under each tread. 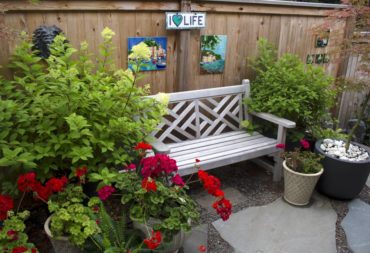 The railing of steel uprights, cables and bamboo hand rails almost disappear so that the treads and the under structure appear suspended. John Pitts can’t say enough about the local craftsmen who made these stairs a reality.

An equally astounding feature is a massive kitchen island that introduces the Carerra marble — the megastar of the home. Pure white with dynamic splashes of deep gray, the marble is cut from sequential slabs so the splash patterns match when folded up into the sink’s backsplash or are rolled over the waterfall edge of the island to the floor. The craftsmanship required to implement this plan is as incredible as the marble itself. 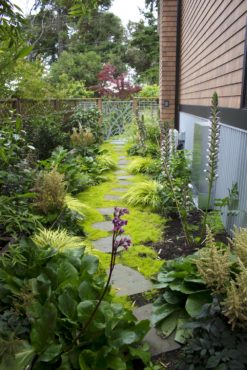 The home’s pale-gray palette turns out to be the perfect background so the white-and-gray marble can sing. The kitchen only begins the marble’s appearances. It repeats, or sets the stage, in a small office/pantry, both bathrooms and a counter top in the laundry.

Laminate kitchen cabinets with an understated texture that rolls like horizontal bamboo are gray under the island and white elsewhere, with simple, bar-style pulls. A trio of the simplest of lights shines down on the island, as do small, high-intensity canisters inset in the ceiling.

Walls of glass that can be opened on either side create a breezeway to the garage. One side connects to a silver-ash deck, which then steps down to the narrow garden where the bamboo planter rules. John Pitts says that on hot days, that is the spot for a cool retreat. A spa tucks out of sight on the end of the deck, where it has access to an interior shower off the main floor’s half-bath.

In the half-bath, a translucent glass wall turns out to be a door separating the shower from the powder room. It has no frame and is hinged directly into the wall. The basin is a transparent glass bowl so the beauty of the marble shines through.

The trip upstairs is worth the master bath alone. Finishes seen throughout the home join in peaceful harmony in a beautifully proportioned rooom, which hits the precise note of contrast between delicate and substantive.

Partners on the
Pitts Home

The milky-white bath tub sits like a monolith in front of two huge windows. Translucent glass offers privacy at the shower on the entry side and the water closet on the other end of the room. The shower itself is glass, with book-matched marble on display like an abstract painting. This exquisite room rises to a new level of serenity even in this supremely peaceful home. 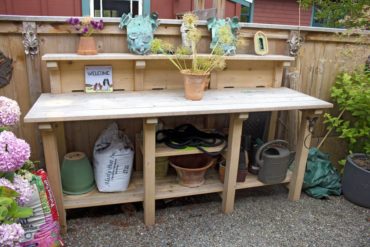 The master bedroom stretches across the length of the home and feels like an adult treehouse with treetops, with Mount Baker and the Strait of Juan de Fuca bringing hints of the outer world. A sitting area in front of the fireplace and a chunky, upholstered bed anchor the two ends of the room with a hefty black chest straight ahead. It is a retreat within a retreat.

Out of the many places they’ve called home, Suzanne and John Pitts say this one is their best. The flow and harmony, the delicate details and grounded architecture, the way it lives day-to-day and blends into the garden, and the joy of living with their art fulfills their search for a simpler life.