A Home Full of Light and Life 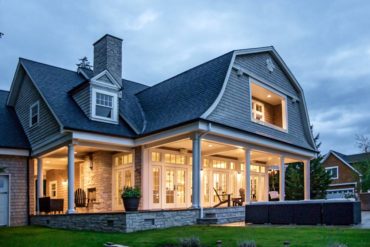 Stepping into the foyer of Brian and Holly Jacobsen’s home and looking into the great room, one is struck by the amazing light flooding through the massive expanse of windows that face the water. White millwork and a well-chosen monochromatic color scheme of soft grays and blues offer a sense of cleanliness, peacefulness and serenity. Even on a dark, rainy day, the lofty tray ceilings, carefully placed recessed lighting and large open space make the room feel airy and fresh.

The couple live full time in Seattle, but both longed for a retreat away from the hustle and bustle of the city. Brian wished to recreate the memories of his childhood summers playing at the water’s edge on Bainbridge Island. Holly wanted a place to “feel close to the earth,” a place she could garden and “breathe deep and feel peaceful.”

Brian Jacobsen has always been interested in architecture and wanted a chance to design and build his own house. The couple began a search for the perfect plot on which to build their getaway, and eventually found Sunny Cove on Hood Canal.

Coincidentally, they have friends who own properties in the area, and in 2011, Brian Jacobsen stopped in for coffee with a friend who lives near the present home site. Feeling it was the perfect spot, the Jacobsens acted quickly to purchase it.

Architect Ed Buffalow was retained to design the home and incorporate the couple’s ideas and needs. Plans were ready to go in November 2012 when winter set in with a deluge of rain, and the entire property flooded and turned into a small lake.

Testing began to determine the stability of the ground, and it soon became evident the foundation would have to be suspended on 50 pin-piles driven down to bedrock. That unique design element caused delays in permitting but eventually Clark Construction of Bainbridge Island was able to begin. 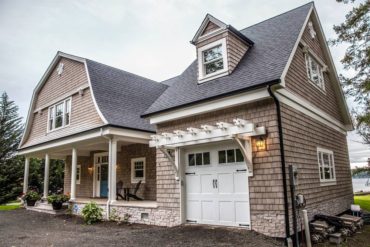 The 3,300-square-foot, two-story home reflects the Jacobsens’ love of New England bleached shingle style architecture. The gambrel roof shields the second story, overhanging the first floor, resulting in substantial covered porch areas and allowing for shelter in all types of weather. The sloped gambrels offer a beautiful view from the water of the back of the home.

Brian Jacobsen mentioned his obsession with details and tweaking the curve of the gambrels during the construction stage, attesting to the patience and professionalism of Clark Construction’s president Rachel Turnbull and her team. The shingle siding combined with stone provides a timeless, natural, coastal look and feel to the exterior, blending the home seamlessly into its surroundings. 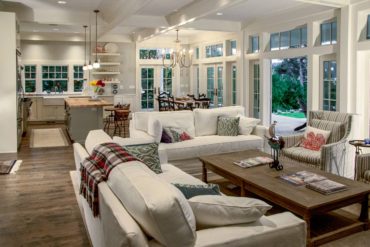 Steel beam construction on the exterior walls affords the unbroken expanse of the great room. In addition, it supports the six sets of French doors lining the entire back wall and two sides of the room.

The triple-glazed doors, which are metal clad on the outside and wood on the interior, bring in light and protect from the elements but also can be opened during nice weather for an open “inside-out” feel. The southern exposure captures the light year round and provides a comfortable setting for the deck-level spa at the end of the porch. 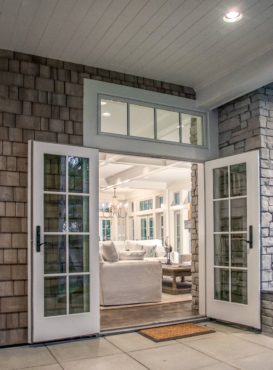 Holly and Brian Jacobsen were very clear on the design elements of their Hood Canal home. They wanted large windows to bring in as much natural light as possible. The rooms needed to have a practical arrangement, and be adaptable for use by families and friends in terms of flexible sleeping arrangements. 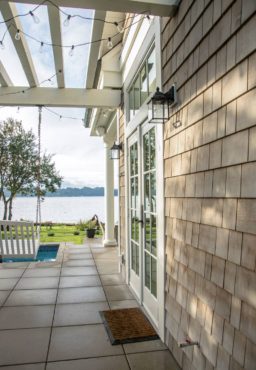 Surfaces needed to be easily cleaned and maintained, and the mechanics of living needed to be tucked away and out of sight. Concerned about energy conservation and sustainability, the couple chose low-maintenance exterior materials, a tankless “on-demand” hot- water system and energy-efficient fireplaces. Transom windows over the entrance doors to rooms within create a flow of light into the rooms. 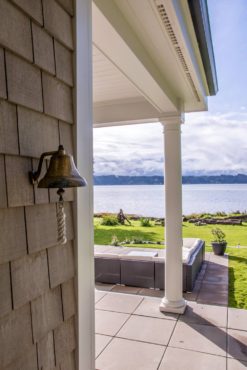 To minimize clutter, it was essential to design built-in storage in every available nook and cranny. The main living area sports attractive understair shelving for books and curios. A small den just to the right inside the main entrance serves as a cozy, barrier-free room for Brian’s mother when she visits. As the downstairs bath is easily accessible, she can be comfortable without the use of stairs. 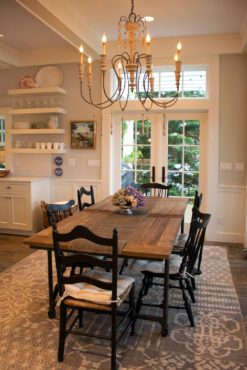 Another storage area under the stairwell is hidden from view and houses the sound system and other house electronic control systems. “I just can’t stand wires running everywhere,” Brian Jacobsen said.

Open kitchen shelving serves as a design element, displaying heirloom and meaningful objects for table use. A large salad bowl turned by a friend from a local maple tree graces the kitchen counter. An efficient mudroom houses the washer and dryer, places to hang wet clothing and drop off wet boots.

Upstairs, linen storage is built into the master bath, and the large guest quarters serve as dormitory sleeping for family groups. A spacious anteroom leading into the guest room stores extra sleeping mats and can eventually “house a baby crib, if and when we have grandchildren,” Holly Jacobsen wistfully said. 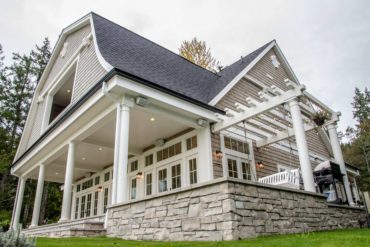 The natural ash floors on the entry level area were laid raw and finished in-situ. She had found a photo of the floors she loved, and the construction and design teams were able to manage an exact match. Moisture was applied to reveal the grain, and a natural stain applied to bring out the desired color tones.

The upstairs floors are covered with carpeting for warmth, comfort and noise abatement. The bathroom floors follow the architectural style of the home, sporting vintage-style penny tile and small hex tiles from Ann Sacks of Seattle. 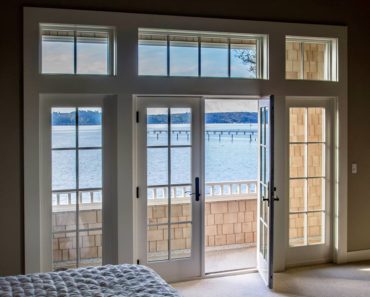 The stairs leading to the upper level are designed with a slightly lower rise and wider tread than the norm, allowing a noticeably comfortable ascent. Reaching the top, the stairwell opens into the roomy bonus room, where one is struck by the unmistakable expanse of the second story. The floors are cantilevered out over the lower walls, forming the large covered porches below. Dormer windows overlook the water, bringing into view the little boardwalk over the sand to the beach as well as a rowboat.

The home is furnished thoughtfully with family heirlooms and new pieces that are mindful of the couple’s heritage. A piece of original art by local artist Tyson Grumm is tastefully combined with other art and prints acquired from estate sales and a favorite shop in Poulsbo. An ancient family cuckoo clock strikes the hour; a beautiful carved Swedish bench provides a place to sit. 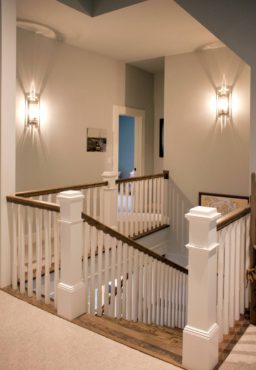 Next to the downstairs bookshelf is a small heirloom child’s rocker, and the dining room chairs hail from both Holly and Brian’s childhood homes. Although the Jacobsens had lots of their own ideas about what they hoped to achieve with the look and feel of the home, interior designer Karen Painter proved an invaluable help in paint color choices and living room furniture.

During the two-year building process, Brian Jacobsen was diagnosed with a life-threatening illness. When the couple were finally able to move into the home on Memorial Day weekend in 2014, he was undergoing chemotherapy. The house took on even a deeper meaning at this crucial time in their lives, as it became a sanctuary for healing. A place to rest and recover between treatments, to embrace the closeness to nature and to the salt water, a place for restoration of body and spirit.

Holly Jacobsen also found that her ability to garden was restorative to her. She learned about the native plants required to maintain the integrity of the shoreline and enjoyed digging in the dirt, establishing flower and shrubbery beds around the property. 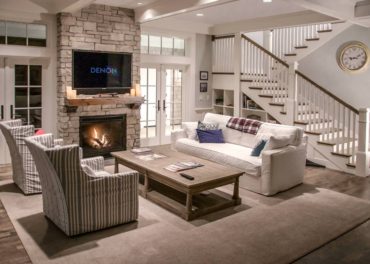 As time has passed and Brian has healed, the Jacobsens were able to share their good fortune and extend their place of healing to others. They open their home to friends who need a place of quiet and solitude, to be close to the healing sights and sounds and fragrance of nature.

The Jacobsens look forward to a lifetime of sharing this home and building memories here.

“We’re looking forward to it becoming a central gathering place if and when our adult children start having families of their own,” Brian Jacobsen said. “We hope it stays in our family for many generations, with lots of memories being made.”