The House the Community Built 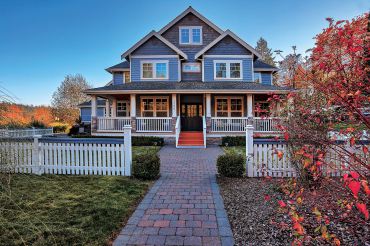 When Kevin and Adele LaCombe first saw their Burley home on the market, they couldn’t help but feel sad. Just a few years prior to that, thousands of people rallied to have it built, in a nearly impossible feat — in five days, often in pouring rain and freezing temperatures.

The home had been built for a local family by the national television show “Extreme Makeover: Home Edition” in 2005. But three years later, the family had fallen on hard times, and their circumstances forced them to sell.

“It sat here and it sat here,” Adele LaCombe says. “It became an eyesore.”

The LaCombe family was in the market for a new home. They loved their Port Orchard log cabin — which Kevin spent two years adding a garage and shop to — but they needed something that fit their family needs better.

When the couple looked at the Burley home, they fell in love with it — even though it looked like a “ghost house,” as Adele described it. The backyard was taken over by blackberries. The front yard was so overgrown with weeds that the LaCombes didn’t know about its beautiful water feature until they started working on the landscape, months after buying the property.

“Our community stepped up to the plate to build the home. I didn’t want it all broken down. I didn’t want this to be the last chapter,” Adele says. “I remember walking out of the front door when we were buying it — I couldn’t believe we were doing it.”

Giving the Home a New Life

Kevin LaCombe, who’s an engineer by trade, loves to fix things. So when the LaCombes bought the home in September 2009, he immediately had a long to-do list. The master bedroom had a major leak under the tub that caused rot. The bedrooms were fully customized to the previous owners’ personalities and some would have to be completely redone. The yard itself would take at least a year to rehabilitate.

“It was a year of just pulling blackberries,” Kevin says. “When I started clearing, I found these old trees we didn’t know were there.”

Turns out, the 4.35-acre property had an old orchard with apple and plum trees, as well as old grapevines and a pasture. In addition to restoring the two water features — one in front and one on the side of the home — Kevin worked for months to bring the landscape back to life. The home, too, needed a fresh coat of paint, and the couple was able to match the original colors despite lacking access to the homeowners book.

Inside, major work was done on three of the five bedrooms. The former “carousel bedroom” — which had a wall installation of a rounding board and two horses — was transformed into a Star Wars bedroom (complete with a wall mural) for one of the couple’s two sons. A giant play-dough-making contraption was removed from the wall of the “play-dough” bedroom, which now serves as a crafts room. The soundproof recording booth in the “music” bedroom, now occupied by the couple’s daughter, was turned into a closet.

Throughout the remodeling, Kevin and Adele were conscientious about the home’s history. Everything that could be salvaged was put to a good use. The carousel installation — with the rounding board made by a world-renowned carousel restorer — was donated to a charity auction. The foam from the recording booth was given to someone who was creating a home recording studio. The back of the backboard from the play-dough device had signatures from the people who worked on the house, so Kevin turned it into shelving. 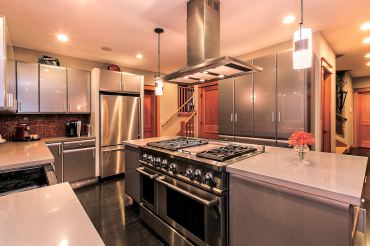 “We wanted to take out the customization (of the rooms) so we did a lot of work on touchups and painting,” Adele says.

The LaCombes counted about 35 shades of paint in the original design. Now, two colors are used throughout most of the main areas.

Two of bedrooms were left untouched, sporting the original designs from the show. The “go-cart” bedroom was a perfect match for the personality of the couple’s other son. And the “dolphin bedroom” in the attic — with giant dolphins painted on the walls and floor tile that resembles the ocean — now serves as Kevin’s office.

The home was perfect for the LaCombe family needs. The kids and the parents can all have privacy now, while the cabin was mostly a one-room space. All three children have their own bathrooms (two of the bedrooms are connected with a jack-and-jill bathroom). And the best part for mom: The bus stop is right outside the front yard, instead of the end of a milelong dirt road.

Thousands of people and several hundred companies had their hands in making the home a reality in 2005. They had five days to demolish the standing house, which was infested with mold, and build a 3,200-square-foot home in its place, along with creating a new landscape.

The vendors who donated items spared no expense. Among the home’s features are a 15-inch TV screen built into the master-bathroom mirror, antique chandeliers wired for modern-day use, a butler door connecting the dining room with the kitchen and hand-carved shelves in what is now the game room.

Guided by builder Howland Homes of Shoreline (which has since closed doors), hundreds of contractors from numerous businesses worked around the clock, volunteering their time. Workers came from all over Puget Sound, and many Kitsap residents gave up vacations, family time and sleep to create a dream home for strangers. The entire Burley area was a hive of activity, as neighbors allowed use of their properties for staging areas, and trucks hauled donated materials and supplies nonstop.

To the spectators, the site looked like a mad house. To the workers involved, it was more of a controlled chaos. Landscapers, roofers, painters and siders, all dressed in blue Extreme Makeover T-shirts, worked simultaneously on their tasks — more than a hundred people at a time moving around in what resembled a giant ant colony. Competitors worked next to each other and businesses ranging from caterers and massage therapists to motels and RV dealers contributed services. 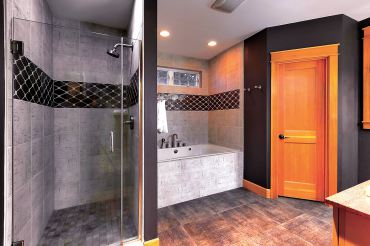 The project had been meticulously orchestrated to the minute, but by day two it fell eight hours behind. It didn’t help that temperatures dropped below freezing on a night when the foundation was supposed to set. But the crews, some visibly exhausted and full of mud, kept at it.

By the time at least 60 framers, 50 electricians, 45 tapers, 22 tile installers, 14 heating and cooling installers — and on, and on — were done, they had created in four and a half days what would normally take a minimum of six months. Those who worked on it described the set as full of excitement and energy, and many of the sleep-deprived participants expressed gratitude for being part of such a display of the human spirit.

Adele LaCombe remembers that feeling. She was one of the hundreds of people who came to watch the construction in awe. “So many people invested their love and energy into this home,” she says. “I realized if a family didn’t come and love this house, it would fall apart.”

Being part of a national television show no doubt put the home on the map. But it’s another part of history that excited Kevin LaCombe. Once a 300-acre socialist colony populated by about 150-200 people, Burley has an interesting past — and the LaCombe property is part of it. 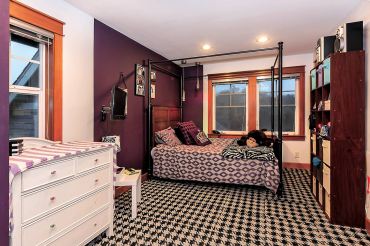 “One of the colony’s businesses was a cannery, and this is where they raised the fruit,” he says.

The colony owned, among other things, a sawmill that employed more than a hundred people, a schoolhouse and a hotel with a dining hall. Shingles made at the sawmill were in demand in Tacoma and San Francisco. The land and houses were collective property and the homes were modest and usually crowded.

There are few remnants of that time in Burley’s past. Pilings can still be seen from the LaCombe property, a telltale sign of a pier now gone. The Burley Library Association, formed when the colony disbanded, maintains the community center, as well as a cemetery and a park. There’s no actual library any more, but Kevin has the last library book, an 1884 copy of “Shakespeare and the Rosicrucians,” stamped “Cooperative Brotherhood” (the colony’s name) and inscribed by the donors who gifted it to the library in 1900. 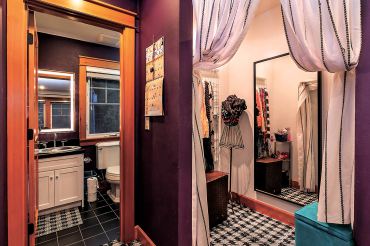 Since moving into the house more than four years ago, Kevin has become fascinated by Burley’s history and has spent hours researching its past. “I have aspirations to write a book someday based on my research,” says Kevin, who serves as the president of the association and is frequently referred to as “the mayor of Burley.”

Burley’s had a little brush with fame even before the Extreme Makeover crews swarmed the town. The community has been mentioned in a couple of books. One was the “Dreamer of Dune,” written by the son of “Dune” author Frank Herbert, who spent a lot of time in Burley visiting his grandparents, and later recreated some of the colonist ideas in his famous book. The other book was “Utopias on Puget Sound” by Charles Pierce LeWarne. (Adele compares the building of this home with trying to give someone an utopia, in a sense.) 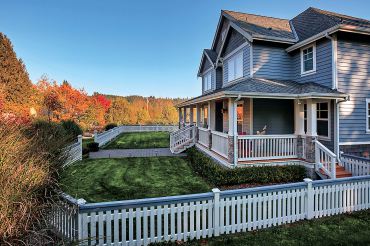 The notoriety returned after the LaCombes bought the home. It became one of the covers of the bestselling Cedar Cove book series by Port Orchard author Debbie Macomber, who happens to be Adele’s mom. The home was featured on the cover of “311 Pelican Court” before the books were reissued with actress Andie MacDowell on the cover, following the launch of the Cedar Cove television show.

“The house really is quintessential Cedar Cove,” Adele says. “It matches the spirit of the show.” 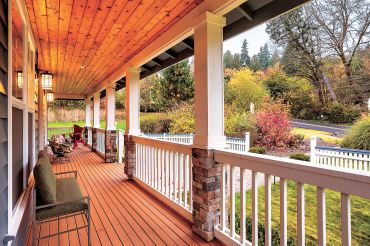 The LaCombes see their home as another chapter in the town’s history, and they’re proud to have been part of it. They’ve been happy to get visits from many people who worked on the house, and they love the excitement of the community to see the home alive again. The home, they say, will be here long after them, a symbol of what the community has achieved and a tribute to Burley’s rich historic past.