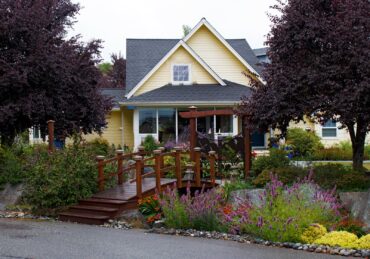 When Sherry and Kirk Kanode moved into their beautiful, brand-new custom home in 2002, little did they know they were embarking on a gardening adventure of a lifetime. A deep, crescent-shaped bioswale separated their front yard from the street, making street parking and a path to the front door nearly impossible.

The home was a spec house, and the developer had put in a lawn and a few trees and shrubs, but there was much to be done to enhance the half-acre property. Kirk’s career in the Navy kept them on the move from the time they were married nearly 50 years ago, so neither of the two had much time to develop hobbies as gardeners. Sherry always loved playing in the dirt and dreamed of someday having a garden that would bring her peace and serenity.

The couple began their gardening journey in 2004 with the planning and development of an edible garden, as they liked the idea of growing their own food.

“Kirk will always support anything that involves food,” Sherry said.

Raised beds were installed to save wear and tear on their backs, and gravel paths were designed wide enough to accommodate a garden cart or wheelbarrow. The local wildlife found easy access to the garden before it was surrounded by the attractive fencing plan that is in place today.

The remainder of the property, most of which was planted in grass, presented its own challenge. The house sat awkwardly facing the street but without access. A couple of trees in the front yard didn’t do much to enhance the landscape on their own. 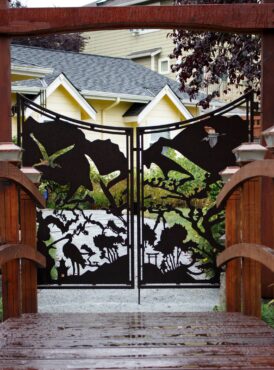 Their biggest stumbling block, however, was the bioswale: a 125-foot-long, crescent-shaped ditch (of varying width and depth) with a retention basin and drainage pipe at the downhill end. Incorporating an element of this magnitude would be a daunting project for any gardener and homeowner, let alone a novice. Presented with an unprecedented challenge, the Kanodes set about learning what they could.

Sherry enrolled in the Kitsap County Master Gardener program in 2010, and a short while later took a rain-garden mentoring class. She learned about water quality and runoff and how the concept of a rain garden might fit into their overall landscape plan. As her vision of a lush sanctuary garden began to take shape, the Kanodes recognized the possibility of incorporating a rain garden in the bioswale, thus making it a part of their dream Northwest landscape. 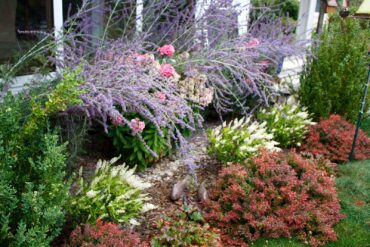 The first step was to contact the Kitsap County Community Development office. The couple found out the swale was designed to accept rain runoff and drainage from several neighboring homes uphill from their property. The water flow had to remain unencumbered and eventually would find its way into Puget Sound, downhill about a quarter mile away.

The Kanodes learned the county was supposed to maintain the bioswale even though it was technically situated on their property. As the first homeowners in the county to request the Kitsap Conservation District work with them on retrofitting an engineered bioswale into a rain garden, they found themselves tangled in red tape. With the help of the Kitsap Conservation District engineers, the couple conceived a three-cell rain garden, with a bypass to prevent a washout in the event of an extreme rain event. Forming a coalition between the county and the conservation district, they devised a cost-share plan to convert the eye-sore bioswale into a lush and exemplary rain garden. 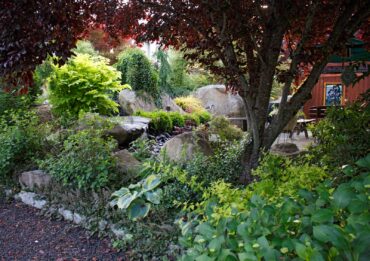 Finally, in May 2014, the county granted approval for the rain garden and work began on the yard makeover. The Kanodes engaged the help of Cameron Scott, owner of Exterior Scapes LLC, known for his work in rainwater harvesting, conservation and iconic Northwest landscapes. The installation of the hardscape and infrastructure took about three months while plans were drawn, materials ordered and subcontractors scheduled for this massive project.

Marenko Stone brought in a massive truckload of rock and boulders, some as large as a small car, to provide steps, pathways and retaining walls. James Shockley built fences and decorative arbors under the Kanodes’ direction. 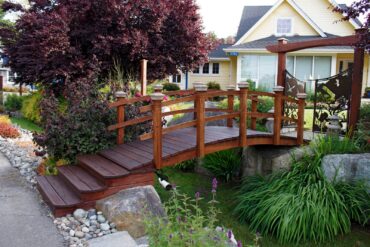 Shockley also converted Sherry’s potting shed into a work of art. He laid a stone floor and continued the stone up the walls for sustainability in moving tools in and out. Shockley installed a granite work surface for potting plants and collaborated with Eastern Wind Glass on the decorative doors with glass inserts.

As the shed took on a life of its own, Kirk designed a folding staircase in the style of a ship’s ladder to allow access to the upper storage loft. A pulley system operates efficiently to collapse and pull the staircase up, out of the way, when it isn’t needed. 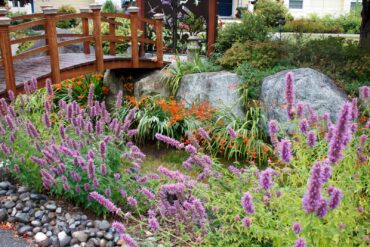 The couple’s daughter, Karla, used her creative skills to decorate an upper wall on one end of the shed. Tools are arranged artistically, standing in large standing pots, while wall hooks near the door provide storage for hats and other hanging items. Custom-crafted wood shelves store keepers for garden books, magazines and plant tags. Sherry’s fabulous workspace garners “oohs and aahs” from all who enter and who encourage her to give it an elegant name. She laughs and says, “It’s just a garden shed.” 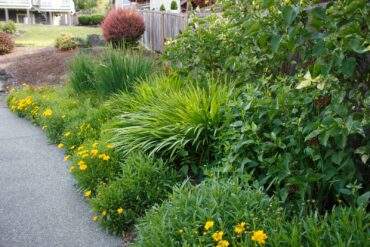 When the time came for planting, the Kanodes realized they needed some help to design a cohesive landscape that would be pleasing to the eye, appropriate for the setting and not too difficult to maintain. Also, choosing the right plants for the right place entered into the equation. Horticulturist Kate Easton of Garden Visions and landscape architect Emily Russell were instrumental in the design and development of the overall plan and in plant selection, following the premise of “right plant, right place.” 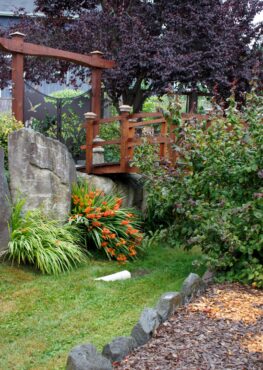 Sherry Kanode did almost all of the planting herself — “with some help from Kirk and daughter Karla” — with the exception of four plum trees, three shrubs and a few other plants. “It is truly a labor of love,” she said.

The bioswale rain garden — bordering the lot and easily seen from the street — is the focal point of the property, drawing the most attention. A narrow gravel bed planted with low-growing shrubs and groundcovers separates the swale from the road pavement and offers a buffer to the grassy depression. 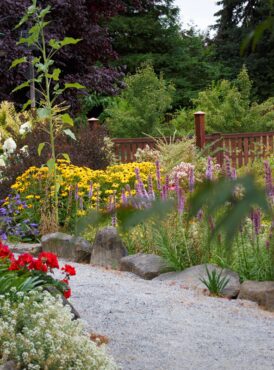 Originally the scope of the swale limited access to the street-facing side of the property but now there is an arched bridge nestled into the rock hardscape. Kanode and her sister-in-law installed stone steps adjacent to bridge. Access to adjoining pathways is through a custom iron gate designed and manufactured by Scott Podruchny, SLP Ironworks.

As magnificent as the landscaping on the bioswale is, the property holds many other delightful surprises. The edible garden is now fully fenced and is accessible from the street, up a couple of stone steps bordered by plants that attract pollinators. Raised beds not only allow easier access without the necessity of bending and kneeling but also guard against rabbits from helping themselves to ground-growing vegetables and fruit. 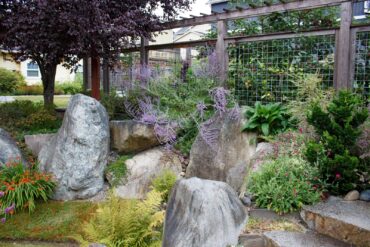 On the house side of the bioswale, a plant-bordered path leads to what Kanode calls the Heart Garden. She has long been a collector of all sorts of heart-shaped artifacts and this shady, protected space has given her a place to display her collection. Heart-shaped stepping stones lead to a stone bench, and rock heart ornaments enhance the plantings within.

The back of this garden slopes downhill to become one of the cells of the bioswale rain garden, where a heart-themed Podruchny gate opens onto the street side of the property. Although most of the plants in the bioswale cells are native and designed to survive in periods of extreme moisture and then drought, the deer in the neighborhood find many of them tasty treats. A temporary deer fence is in place at the moment to prevent browsing, with a more permanent solution in the planning stage. 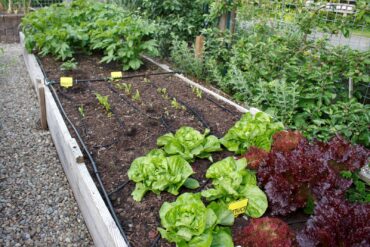 Rock- and plant-bordered gravel paths connect all the elements of the landscape and lead the visitor in, out, around and through this interesting space. Everywhere one looks, there is evidence of creativity, caring and a love of nature and art. Red ceramic salmon leap from a sea of Japanese forest grass near the entrance to the Heart Garden, while colorful-blown-glass objects are found in many other places throughout.

Truly, the Kanodes have accomplished Sherry’s goal of building a garden that offers peace, tranquility and sanctuary from the outside world. There is a sheltered outdoor sitting room with a stone floor for a cooling respite on summer days. The inner courtyard, closed off from the drive by rolling custom gates designed by Kirk, features a dining table for eight. Nearby, the bubbling water feature echoes the sounds of nature, while birds flit in the protective border that shields the area from the street. 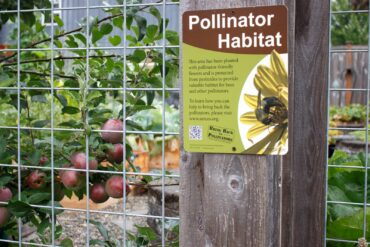 As the curved street surrounds the property on three sides, the main entrance to the home is near the garage. Adjacent to the driveway is a gravel sitting area with a fire pit, separated from the inner courtyard by the magnificent rolling gates. Two additional parking pads are nestled into the landscape on the other side of the house, allowing access to various parts of the property.

There are still plans for a Japanese-style teahouse, which will be installed between the edible garden and the house. That work will begin when the COVID-19 pandemic eases or ends. As far as buying, propagating and installing more plants is concerned, Sherry Kanode admits she has learned that a garden is never finished and it’s a constantly evolving project.

“And honestly,” she said, “I’m never happier than when I am outside, playing in the dirt.”