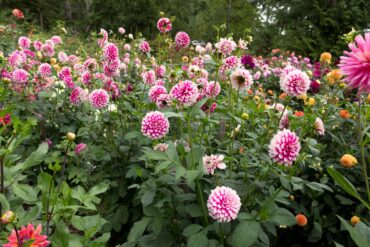 About 20 years ago while living in Sandpoint, Idaho, Paul Kusche got bit by the dahlia bug. A food industry executive by profession, and the son of a landscape architect, he’s always viewed gardening as an important hobby and source of relaxation away from the world of business.

Kusche’s first attempt at growing dahlias ended in disaster, as the first group of tubers rotted and died. Not to be discouraged, he dug into the science of cultivating this fascinating species of flower, learned what mistakes he made the first time around, and acquired 50 more tubers. 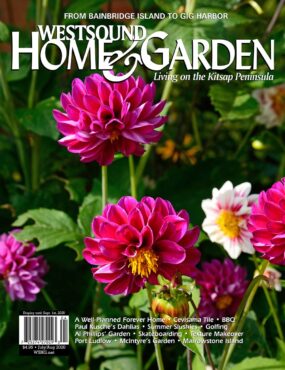 He dug up those at the end of the season and gave them loving care. Because dahlias naturally multiply, the first batch became 100 for planting the following year. The 100 became 250, which quickly became 500 and in a few years, he had 1,200 tubers.

When Kusche retired as the senior vice president of Litehouse Foods in 2015, he made the decision to relocate to the Gig Harbor area, where both of his sons and their families live. The Kusches purchased a property in Olalla to establish their new home and a place where his passion for growing dahlias could thrive. 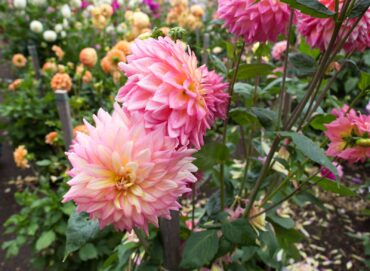 The first step in establishing the dahlia farm was to build a 48-by-36-foot pole barn and an attached 8-by-36-foot cold frame and greenhouse, which can be heated if necessary. He measured out 100 by 50 feet for a plot and amended the soil for prime dahlia-growing conditions.

He first planted the beds in 2018 after extracting weeds, tilling, spreading multiple loads of composted goat manure, and spreading and tilling again. This routine is repeated annually, feeding the soil whatever this Master Gardener deems necessary for the growing success of his flowers.

When the temperature of the soil reaches 60 degrees, planting begins. Holes are dug shovel width and 4 to 6 inches deep to accommodate two tubers each. Kusche inserts a single stake into the soil between the two tubers, placing eye points up and then covering with soil.

The stakes, about 3 to 4 feet tall, provide sturdy support for the weak-stemmed plants, which can blow over or break off easily in the wind. Dahlias need thorough deep watering twice a week, and as they are surface feeders, Kusche gives them a basic nitrogen-based fertilizer when the plants are about 12 inches tall. Subsequent feedings are with a 0-10-10 fertilizer to promote root growth and flowering.

How does he keep track of thousands of dahlia plants in a 5,000-square-foot-field? “Alphabetically is the only system that makes sense,” Kusche said. “I tried planting by color and also by type, but that was too confusing. So now, I just plant them by name, and the sizes, types and textures all blend together for a beautiful kaleidoscope of color.” 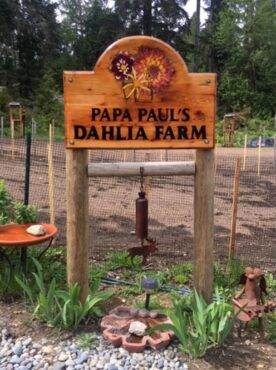 Kusche grows dahlias for his own pleasure, and excitedly shares his passion with his community. Although his wife, Teena, thinks he is “obsessed” with growing dahlias, she helps him share them with others. She makes bouquets and distributes them around town at the post office and various businesses. The couple also open their garden of flowers to any bride who may wish to come and gather dahlias for her wedding during the bloom season, and select as many flowers as she would like, free of charge.

Kusche enjoys sharing his vast knowledge and experience by holding Master Gardener classes and workshops on tuber cutting, packing and storing. He is available to give talks to garden clubs on cultivating dahlias. 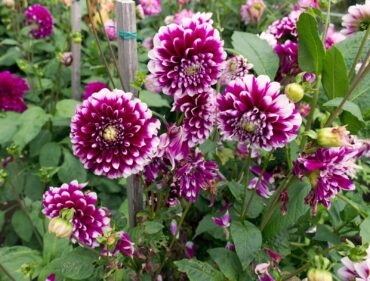 Dahlias originated in Mexico and were hybridized in Europe. It is thought the Aztecs used the plant for medicine and food, but little else is known. In 1789, plant parts were sent from the director of the Botanical Garden of Mexico City to Antonio Jose Cavanilles, on staff at the Royal Gardens of Madrid in Spain.

From these, Cavanilles developed three new plants, Dahlia pinnata, D. rosea, and D. coccinea, which he named after the Swedish botanist Andreas Dahl. From those three plants, the cultivars have grown to nearly 50,000 named plants today.

They’re classified by size, flower type and color, and there is a dahlia to please nearly every preference a flower lover would have. The largest flowers can be 10 inches in diameter, while the smallest are diminutive, under 2 inches. Flower types range from flat “dinner plates” to golf-ball look-alikes, and colors fill the spectrum from purest white to bronze, with everything except blue in between. 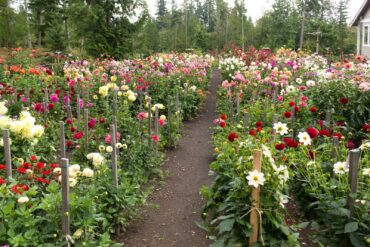 In very mild climates, the tubers can be left in the ground to overwinter, plants re-emerging in spring as perennials. The Pacific Northwest winter climate is too cold and wet to leave the tubers in the ground, as they will simply rot and die.

You must dig, divide, trim, wash and dry the starchy tubers to prevent disease. You should then wrap and store the tubers in a cool, dry space kept at between 35 and 50 degrees and never allowed to freeze.

As the days lengthen and the temperature warms, Kusche places two tubers to a pot in peat moss and moves them to the greenhouse. Here, with increased light and an increase in temperature, the eyes on the tubers in the 600 pots begin to develop as they are waiting to be planted. 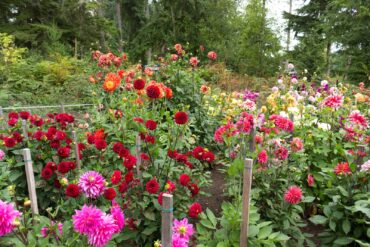 Kusche tills his field, amends his soil and digs the holes in preparation for planting. He is careful not to plant too early when the soil is cold and wet, as he wants to avoid the tubers rotting.

When spring finally rolls around, he carefully lifts the tubers from their pots and plants them alphabetically in rows with a stake between each two tubers — and the growing season begins.

Kusche’s morning routine is to walk his field to check for insect or animal damage. Deer sometimes will come in and take a nibble, but gophers and mountain beavers will actually take out a whole plant and drag it into their hole. 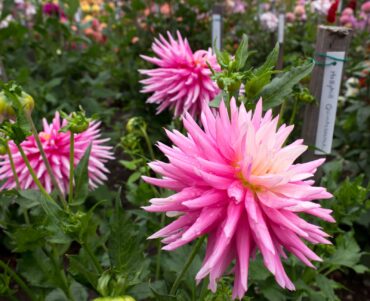 He uses a safe insecticidal soap spray to ward off aphids and manually controls slugs and snails. Dahlias seem to attract earwigs, but Kusche just leaves them be unless he disposes of them manually, as he chooses not to use pesticides on his flowers.

The entire homestead is a full 5 acres, but at the moment only the top one acre or so is cultivated. The entire property is designated a Certified Wildlife Habitat, and future plans include more vegetable and fruit space; walking trails; and plenty of spots for mason bee nests, birdhouses, birdbaths and bird feeders.

Kusche has been a Master Gardener most of his adult life, active in Idaho as well as in Washington. As such, he heavily supports the Master Gardener Foundation of Kitsap County, which raises funds to support Master Gardener activities all over the county. 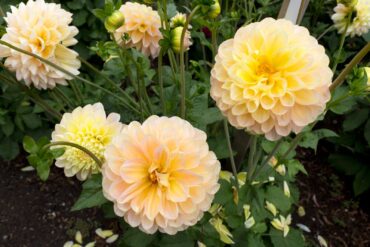 This year, the Kusches saved 3,000-plus tubers for the foundation’s plant sale, which was to take place on Mother’s Day weekend. Due to COVID-19, the sale was cancelled and dahlia tubers are going begging. The public is welcome to contact Kusche to purchase tubers, and all proceeds will be donated to the Master Gardener Foundation of Kitsap County.

As is the case with many lifelong passions, Kusche said that “growing these lovely flowers was just a challenge that got out of hand.”

“I just love the flower and I love the varieties,” he said. “And when the garden is all lit up in full bloom, just looking at those flowers makes me happy.”

Contact Paul Kusche for more information regarding the cultivation of dahlias
or to arrange for purchase of tubers for the Kitsap Master Gardener Foundation.