Master Woodworker Hugh Montgomery — The Touch to Transform Any Home

Hugh Montgomery, a custom furniture and cabinetry maker, sits in a small office, just off his noisy shop on Bainbridge Island, and tries to explain what he does.

“I like to work with my hands,” says the 58-year-old carpenter. “I like to make things and build things. … My business is what I like to call build-in work.”

It’s all commissioned work, and he receives his leads from a few contractors he works closely with — as well as from word of mouth and his website, hughmontgomery.com. He also interacts with architects, interior designers and, of course, individual clients.

Montgomery is not your typical woodworker — if there is such a thing. He grew up in Maine and later attended Middlebury College in Vermont, where he coached skiing. One summer, like a lot of college students often do, he went in search of a job to earn some extra money and instead stumbled upon a potential career path.

He hooked up with a contracting crew and began learning the building trade.

“I always wanted to build a house,” he recalls, with a flash of memory. “(But) I didn’t want to be pounding nails for the rest of my life. … What I wanted to be was an architect.”

So, Montgomery eventually enrolled in the Boston Architectural College and attended for two years before landing a job with an architectural firm. But as time went on, he quickly discovered something about himself.

“I learned that I didn’t want to sit at a display table … and came to the realization that architecture was great but what I really wanted to do was do stuff with my hands,” he explains.

At the same — circa 1990 — Montgomery decided he needed a physical life change as well and moved from Boston to Seattle. Once he landed in the Puget Sound area, he got a job with a custom cabinet maker “and learned on the job.” At the same time, he began taking fine-furniture making classes — first from Ross Day at Seattle Community College and later at the Center for Furniture Craftsmanship, where he spent two weeks working with Michael Fortune, a well-known Canadian artisan.

Those courses “made the difference,” Montgomery says. They helped him understand furniture making, how to execute bent laminations, do curved work and veneer work, and make and use jigs.

The skills he picked up have given Montgomery the confidence to make “sunburst patterns,” like the one etched into a bed board sitting across from him in his office, or any number of dovetailed drawers, re-sawn veneers and the like.

His furniture designs, he says, have been greatly influenced by the shaker and craftsman styles, as well as Scandinavian forms. Many play with the natural tension between the “gracefulness of a curve and the rigidity of a straight line.” His cabinetry work, on the other hand, follows the European style of frameless cabinet boxes and hidden hinges. “It’s more precise and more contemporary,” he says.

Montgomery — who shares the same name of the infamous British soldier who was involved in the Boston massacre of 1770 — opened his first shop in White Center on the Seattle side in 1998. He moved to Bainbridge in 2005.

“I was already doing work here,” he recalls, “and my kids (two daughters) were old enough for school. … I wanted to get out of the city and be out in the country, where there was space. I wanted a property like this where there was a house and shop.”

But that didn’t happen right away. Montgomery spent nearly 10 years further hewing his craft and developing his business in a shop located in the Agate Pass Industrial Park on Highway 305 near Suquamish. He purchased his current property, tucked away in the woods off Fletcher Bay Road, in 2013 and completed his shop around 2015. The house, incidentally, was designed by James Cutler, one of the island’s most famous architects (known for designing parts of Bill Gates’ mansion in Medina and many of the buildings at the Bloedel Reserve).

The Grices, a longtime Bainbridge family, previously owned the property itself. Art Grice, a descendent, lived on the property and was also previously a cabinet maker, but later returned to his original passion — architectural and fine art photographer. According to Montgomery, he has photographed many of Cutler’s homes.

Like a lot of specialty craftsmen, Montgomery is a bit shy about revealing the names of his clients, including those in, say, Los Angeles or other states where he’s been known to ship king-sized anniversary beds, cabinets and chests. Some local clients do stand out, however, such as the high-bank home he worked on in the south end of Bainbridge Island with a view of Blake Island.

The client had some beautiful madrona trees on his property and Montgomery suggested using the same wood as part of the kitchen makeover. “The customer said he was interested in a look like the bar (in the movie) Titanic,” he recalls, with a smile. “There was a lot of furniture making and cabinetry making involved … (including doing) curved work around an existing column. … If I didn’t have the furniture-making skills (acquired over the years), I wouldn’t have been able to do that.”

Montgomery spent an entire year reworking another house on Bainbridge, doing multiple bathrooms, bedrooms, an office, bookcases and other furniture, plus the entire kitchen. The latter included the use of custom veneer, employing building methods using several different joinery and bent wood processes, such as wenge and mottled makore to create a more dramatic look.

Walk around Montgomery’s 800-plus-square-foot shop and you can see why he is able to create the designs and fine furnishings he does. There are jigs (or templates) hanging from walls, table saws, sliding table saws, ban saws, planers, joiners, thickness sanders and much more.

“We have the full complement of machinery any cabinet shop would have,” he says while showing a guest around his digs.

Unlike lots of businesses during the throes of COVID-19, Montgomery and his small shop survived quite nicely, thanks in part to having “at least a year’s worth of business lined up.” Then, a year or so into the pandemic, “everyone wanted to fix up their house,” leaving Montgomery and businesses like his in a good place.

His one continuing challenge is the supply chain issue that seems to be constantly in the news and still unresolved. For Montgomery, the challenge is likely to be an item such as European hinges or slides that he orders from a company such as Blum Inc. For example, he might order several dozen hinges and when he needs them, discover they wouldn’t come. “It used to be a three-day turnaround. (Now) it’s pretty dramatic,” he says. 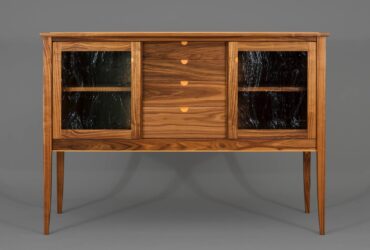 The price of wood is also rising and has been going up for some time. But Montgomery uses a supplier in Port Townsend — Edensaw — that gives him easy access to woods he may be seeking. “It’s nice that (they’re) just 50 minutes away,” he says. “On some jobs, I can hand-select custom woods. That’s exceptional.”

Montgomery’s next act is a bit of a pivot away from his traditional custom cabinetry and furniture making. He’s formed a company, Coastal Mountain Vanworks, that’s creating a removable modular kitchen system for camping vans.

The idea sprang out of his desire to ski and camp after he purchased a Mercedes Sprinter in 2018. “Besides using it for work, I wanted to be able to camp out of it. I love to ski and I realized if I built the van out, I could stay (in the mountains longer) and ski,” he says. 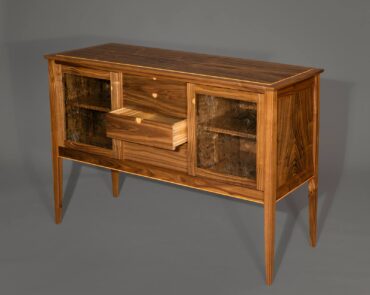 The unit — dubbed the “Three 85 Galley” — is designed to fit either side of a van and “provides everything you need to make your adventure van more comfortable,” Montgomery says. Among other items, the Galley includes a water system, a two-drawer storage unit, portable potty drawers (if buyers so desire), countertop space with flip-up extensions, a USB port and more.

“I have a lot of fun doing this kind of work,” Montgomery says, with a glimmer in his eyes. He wants to develop it further as a product that he can market.

“The materials are durable and someone can easily bolt this into their van and have a kitchen galley,” he says. “It’s always something I wanted to do.”

If the Vanworks venture is anything like Montgomery’s woodworking, it’s sure to be a success.