Long before there was a Purdy Bridge, when the main access to the south end of the Key Peninsula was by boat, a group of concerned citizens banded together to form an association to help their neighbors. Seeing the need of a rapidly growing community, these citizens formed the Longbranch Improvement Club (LIC) “to encourage any activity for the betterment of schools, homemaking, roads, marketing, dairy, poultry and all its branches.” The club was incorporated in 1921 and the group purchased 10 acres of land just before the first paved county road was completed. The purpose of the land purchase was to build a school and a baseball field, and as a legal entity, LIC now had the opportunity to apply to the Works Progress Administration (WPA) for assistance. 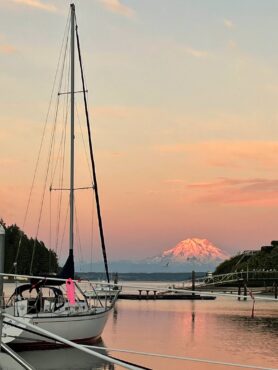 In 1921, baseball was truly an American pastime and every community, regardless of size, took pride in its local team. A grandstand was erected adjacent to the ballfield and served the community as a social center when residents turned out for games. Baseball offered a welcome relief from hard labor and served as a bridge between immigrants of various nationalities, languages and religious beliefs. The Longbranch baseball team was the pride of the Key Peninsula.

When the baseball field and grandstand were built, more land was cleared between the new road and the salmon stream that transects the property. A two-room school house was built to serve the children of the lower peninsula, and in 1939, the WPA built an A-frame, timbered stone building to serve as the gymnasium for the school.

“Built of hand-mixed concrete and local stone, the building bears log rafters and immense beams,” according to the LIC website. When the school moved to a larger, more modern site farther north, the beautiful stone building became the LIC Clubhouse, and in 1956, the organization added restrooms, an upgraded kitchen and a wooden floor. 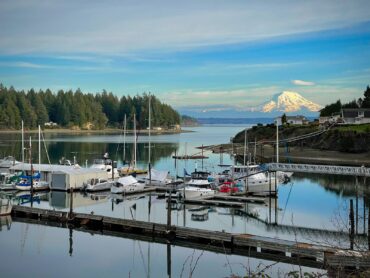 Throughout its history, the clubhouse has hosted basketball games, community socials and dances, huckleberry festivals, weddings and funerals. It’s listed on the National Register of Historic Places, which will preserve the integrity of the building, but the registration also makes needed repairs a bit more complex. Funding for repairs and upkeep of the historic landmark in large part is due to the rental income from weddings, parties and other large group events that use the building.

In 1964, Pierce County abandoned the old wharf that had served as the lifeline to the lower peninsula before a paved road was built. In the early days, sternwheelers steamed back and forth from Point Defiance and Olympia, bringing groceries and passengers who commuted during the weekday, as well as those coming on weekends to spend time in their waterside cabins and cottages. These boats also carried agricultural products such as eggs, milk, fruits and baskets of wild huckleberries from peninsula farms. 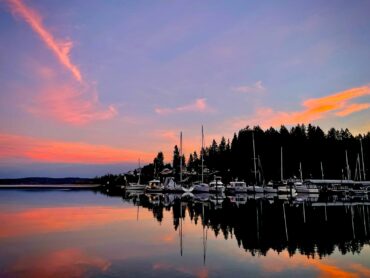 In the early 1920s, Pierce County commissioned the Skansie Brothers in Gig Harbor to build the ferry “Elk” for serving the people of the lower peninsula. When the “Elk” arrived in Longbranch on its inaugural voyage, the LIC arranged a celebration to herald the onset of modern transportation and commerce. About 250 people turned out to listen to speeches by dignitaries and eat fried chicken

The building of the Tacoma Narrows Bridge in the 1950s made the Longbranch ferry service obsolete. At this time, the LIC built a much needed public dock according to the county engineers’ plan. The LIC called upon its members for donations of cedar and fir logs, saw milling, labor and cash.

Several additions and modifications have been made to the dock over the years, and today the Longbranch Marina serves as a favorite spot for boaters from around Puget Sound to stop in for a visit. Two-thirds of the marina space is available for guest moorage, while one-third is reserved for LIC members. Every year on Opening Day at the marina, members turn out for a potluck meal, music and an opportunity to socialize. Moorage fees from the marina cover the yearly expenses of the LIC, while the LIC Foundation, formed in 2016, serves as the fundraising arm of the group.

Continuing the tradition of serving for the “betterment of the community,” the LIC strives to bridge the disparity between the two obvious lifestyles of the Key. While many residents enjoy sprawling vacation homes or are affluent retirees or successful business people, equally as many live at or near the poverty line in backroad cabins or mobile-home parks. The LIC has organized blanket and clothing drives, literacy programs and food drives, and also sponsors ongoing scholarship programs for graduates of Evergreen Elementary School. It also supports the school’s science and math portions of the outdoor education program offered each spring. 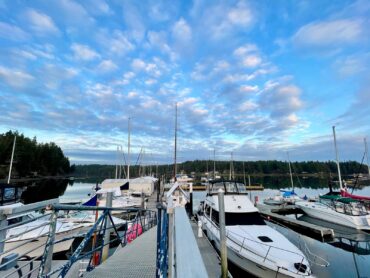 A new community garden, which marks the centennial, is ready for planting on the LIC clubhouse grounds. It will include an accessible garden for seniors and disabled members of the area. Additionally, an experiential garden is underway at Evergreen Elementary, also sponsored by the LIC and its volunteers.

“All of the work of the LIC is accomplished by its board of directors and committee members, as has been the tradition for 100 years,” said Marsha Kremen, past LIC board president.

Current President Kelly Guenther oozes with enthusiasm over the past work of the LIC and all of its current projects, and is excited about plans in the works to bring other groups and organizations of the Key Peninsula together for serving the changing needs of the area.

According to David Ziegler, centennial celebrations chair, “Plans for celebrating the 100th anniversary of the Longbranch Improvement Club are well underway.” July 16 is the Centennial Marina Day, which will be commemorated by the arrival of The Virginia V, a steamship that’s one of the two last remaining examples of the famed Mosquito Fleet that served Puget Sound communities in the early part of the 20th century. A cruise on the Virginia V from Pt. Defiance to Longbranch is being planned, as well as tours of the ship while docked at the Longbranch Marina.

Aug. 27 and 28 is a centennial weekend celebration, which will include lots of old-fashioned fun at the LIC Clubhouse. Saturday will feature an LIC-sponsored outdoor barbecue and picnic, along with races and contests such as a two-day wiffleball tournament on the old ball diamond. There will be a Saturday night barn dance with music performed by local fiddlers, and Sunday will feature a pioneer breakfast. Wrapping the weekend up, an antique car show will be on display on the LIC grounds.

Find details and ticketing information for of the LIC centennial celebration on the organization’s website at licweb.org/celebrating-our-centennial.