Among the many hidden treasures in the West Sound area is the large number of artists, artisans and writers scattered within the local towns, villages and backcountry communities. Anna Brones is one of those most talented artists and writers, quietly working in her waterside studio and influencing her audience in areas of lifestyle, mindfulness and creativity.

Brones has been writing, blogging and publishing books about recipes, lifestyle and bicycling since about 2012. In 2018, she served as the impact producer for the film “Afghan Cycles,” which features the trials and triumphs of women cyclists in Afghanistan. While living in Paris in 2015, she collaborated with photographer Jeff Hargrove on “Paris Coffee Revolution,” a soft-bound pictorial homage to the modern art coffee movement in the City of Light.

An only child, born and raised on the Key Peninsula near Vaughn, Brones grew up as a lover of nature and an eager participant in her family’s strong Swedish traditions. Her mother, Britta, was born and educated in Sweden and came to Washington as the bride of Norm Brones. The two met when he was a foreign exchange student in Sweden. 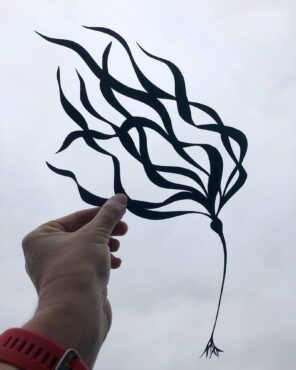 Norm Brones’ grandparents homesteaded on the Key Peninsula and he spent many happy summers there while growing up. When the newlyweds made the decision to move to the United States, they chose the beauty of the Washington countryside rather than the concrete jungles of a big city. His uncle was an established businessman in Key Center and welcomed the young couple into his home while they found property and built a home of their own.

Norm Brones was a professional surveyor and an experienced woodworker and Britta an accomplished artist. Together they designed and built their home by themselves and remain in it today. This upbringing helped Anna to learn the importance of place, which influences her work as a writer and artist. 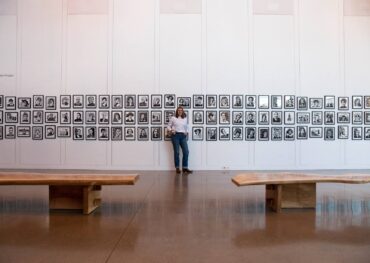 Having an artist in the family meant the Brones home was filled with all sorts of materials to encourage creativity. Readily available paper, paints, pastels and fibers gave Brones the opportunity to experiment in nearly any art medium she chose. Her mother often volunteered at Brones’ school, helping teachers with art projects for the students.

Earning a degree in international affairs and French, Brones wanted to work in an internationally related field, perhaps for a nongovernmental organization, but most likely in a foreign country. In 2005 while in college, she was a foreign exchange student based in Strasbourg, France, and after graduation spent a year on the French island of Guadeloupe teaching English.

Eventually returning to the United States, she lived in Portland for a while and started the website FoodieUnderground, which focused on a sustainability lifestyle. This young, talented writer with an affinity for travel, adventure and food wrote a regular column for another online lifestyle website and blogged on the side.

In 2013, Brones published her first book, “The Culinary Cyclist,” which is a lovely little cookbook for those who love spending most of their time on two wheels. The book is small enough to tuck into a backpack but contains enough wisdom and healthy recipes for a lifetime. 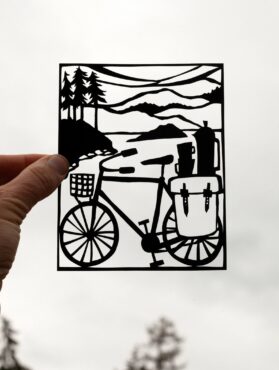 Included in the introduction is this quote by Brones, “The rules for living well, if you can call them that, are simple and a pleasure to follow. Eat local and mostly plants. Ride your bike, even on rainy days. Say yes to dinner invitations. Always bring your signature dessert. Invite people on picnics. Bike in the sunshine. Follow a morning ride with a strong French press.” 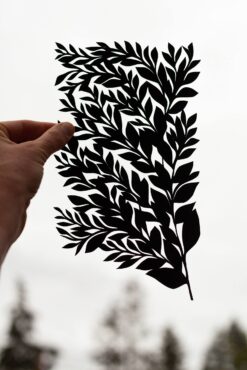 Brones found her collaboration with friend and illustrator Johanna Kindvall worked well in producing “The Culinary Cyclist” and next, she pitched the idea of “Fika: The Art of the Swedish Coffee Break” to Ten Speed Press. The publishing company accepted and by 2015, the book was on Brones’ website and available through independent bookstores.

A very busy few years ensued while this high-energy author travelled, lived in Paris for a bit and published “The Paris Coffee Revolution,” the collaboration with Hargrove. It’s currently being sold in France.

Brones returned from Paris in 2015 with architect husband Luc Revel in tow. The couple felt the natural place for them to settle was the Key Peninsula. Brones continued to write and after the publication of another book in 2016, “Hello, Bicycle,” the couple embarked on a bicycle trip from Washington to San Francisco, signing books at independent booksellers all along the way.

As Brones was busy publishing, she also worked on line drawings and began paper-cutting.

“It was a bit of a fluke, in that I used to cut up old bicycle inner tubes and make earrings,” she said. “One day, I needed a card to send to a friend, so I picked up a piece of paper and cut out a design.”

That small act launched a career in which Brones is becoming well known.

“Paper-cutting began in China a couple thousand years ago and only requires a sheet of paper and something to cut with,” she said.

Traditionally, a design is cut from one piece of paper and holds together by virtue of the cuts in the positive space.

“That learning to think in terms of positive and negative space is what gives paper-cutting its intricate detail,” she explained.

As Brones became more and more skilled, she began to frame and sell her work and use it to illustrate her publications and the newsletter she sends to subscribers.

Spring of 2016 saw the inaugural issue of “Comestible,” Brones’ self-published “zine.” It’s full of seasonal spring recipes and essays on growing, foraging and eating. She has published seven additional issues on a more or less seasonal basis as time has permitted.

In spring of 2020, Brones began publishing tiny zines online, available as free downloads. These eight guides offered tips on surviving quarantine, along with recipes and a way to maintain a creative act of resilience and to stay in the present moment. She called them “Quaran (Tiny) Guides” and at the end of 2020, published “Quaran (Tiny) Guide: The Book.” The small, 64-page book contains all of the recipes and survival tips featured in the guides.

At the beginning of 2020, Brones launched the Women’s Wisdom Project. With the intention to bring attention to a hundred women who, in recent history, have made an impact on the lives of others, she paper-cut a portrait of each. Carved into each portrait is a quote that the woman is famous for. Next to the artwork is a written profile of the woman and the impact she had on her society. The show opened at Vashon Center for the Arts in March 2020 but closed just a few days after due to the COVID-19 pandemic. 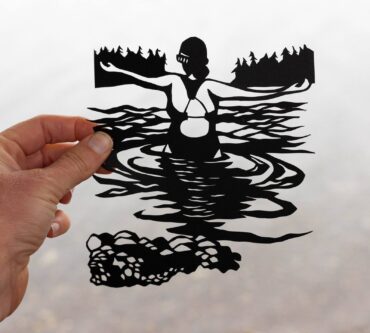 Through her website, annabrones.com, she offers a newsletter titled Creative Fuel. Published monthly, the emailed newsletter shares thoughts and ideas on expanding creative thought, process and energy. It includes resources such as readings from other sources and prompts for experimenting with new ideas. Brones believes within each individual is an urge to be creative and to express oneself in a unique way, and that through that expression individuals become whole.

Over the years, this artist has built an expansive network of friends in the literary world — individuals who work to encourage environmental sustainability lifestyles and women who work for and write tirelessly about women’s rights. 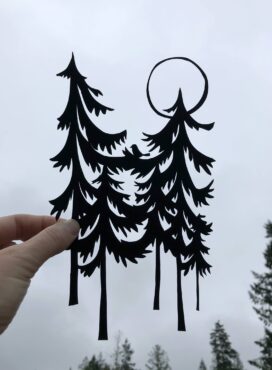 Brones has reached a place now where, although she still has to work daily at marketing herself and her art, she has developed a name for herself. Magazines, podcasts, publications and others seek her out for contributions. Her paper-cutting illustrations were used as chapter headings in the most recent edition of “Joy of Cooking,” published in 2019. Brones also writes advertising copy, is a film producer and has developed a line of products that she sells on her website. She produces, inventories, packages and ships all the products herself. 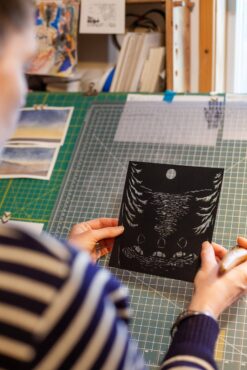 “As an independent artist, you wear many hats — only one of them is actually creating art,” she said.

Riding a bicycle, walking and swimming are as much a part of Brones’ life as writing and creating physical art pieces. She insists that a physical practice on a regularly scheduled routine is as necessary to physical and creative health as eating and breathing. 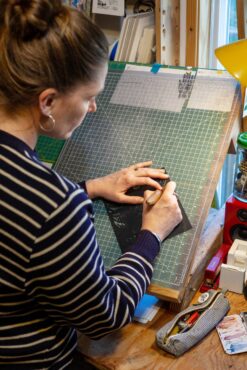 “When biking or swimming out of doors, you get out of your brain and into your physical body, which makes you feel better and consequently better able to create,” she said.

Indeed, Brones practices what she preaches. At the beginning of 2021, she began the practice of a daily swim in the Puget Sound inlet near her home, rain or shine. Sleet, wind and snow or icy waters hadn’t deterred her and every day, she has waded in for a short, invigorating swim. She continues this daily swim and feels it’s an integral part of her life of creativity.

Currently Brones is working on a public-art installation for the Bainbridge Island Japanese American Exclusion Memorial. She is collaborating with her husband on this project, which will soon be completed and open for viewing.

To learn more about this highly creative, successful woman who lives, works and influences the West Sound community and far beyond, visit her website at annabrones.com.