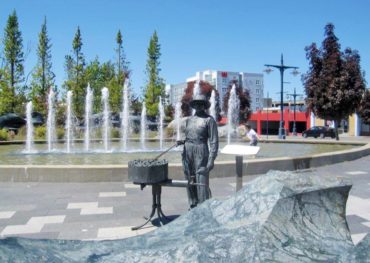 One of the outstanding public spaces in Kitsap County is right in the heart of downtown Bremerton — the Puget Sound Naval Shipyard Memorial Plaza, a wonderful block-long park adjacent to the north end of the shipyard near the ferry terminal.

The park features ship artifacts from World War I and World War II. It was completed in 2009 under the direction of Gary Sexton, who was the city’s downtown project manager at the time. It contains fantastic landscaping, with two major water features, as well as sculptures and old photos of people who worked in the shipyard back in the early 1900s. It is truly a walk into the history of the Puget Sound Naval Shipyard, and this history is depicted in a wonderful park setting. 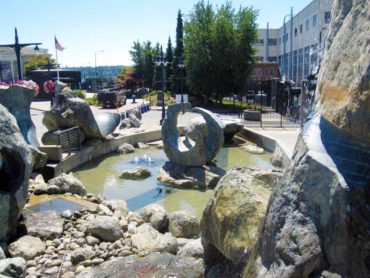 The idea for the park came around 2005 from the Navy due to concerns about security around this end of the shipyard. The Navy decided to purchase the entire block of buildings on the west side of the street, from Washington Street up to the corner of Burwell, in order to provide protection for the buildings in that area of the shipyard.

Once the buildings were purchased and torn down, the city proposed to the Navy to work together on a design for a public space on the property. The goal was to ensure the security buffer the Navy required while telling the history of the shipyard. 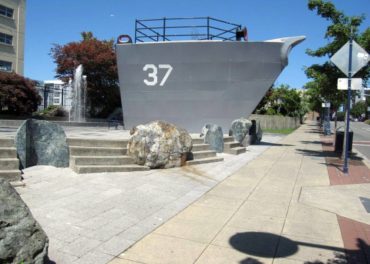 Patty Lundeen of WET Design developed the design, under Sexton’s direction and with the support of the Navy, including Rick Tift, the executive director of the shipyard; and Congressman Norm Dicks. Representatives of Homeland Security agreed with the concept and believed it provided the security they required.

The park opened in May 2009. It was a great example of the Navy and the city of Bremerton working together on a major project that would benefit both organizations.

The major part of the park is comprised of the fantastic, large-rock formations that were sculptured by well-known artist Will Robinson. There is also a bronze sculpture of a woman by the name of Estber Bielmeier, who was a rivet heater in the early 1900s. The sculpture was done using an original photo of Bielmeir doing her work in the yard. In that era, many women did physically demanding work in the machine shops.

There are ponds on each end of the park, connected by a stream of water and with fountains that spray in the air. 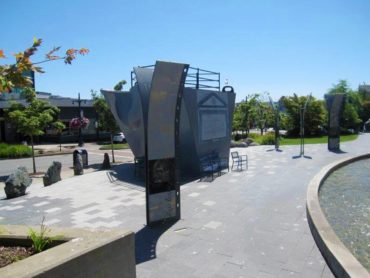 The other major dominant part of the park is the landscaping, with trees from all sections of the Northwest that were mature the day the park opened. Sexton personally drove throughout the Northwest looking for the right trees for this urban space. After 10 years, the landscaping has held up well. The park also has nice furniture for people to use while picnicking or to just sit and relax while listening to the moving water, right in the middle of downtown.

The park is just a few steps away from the Puget Sound Navy Museum, so for anyone who has an interest in learning more about one of the great naval shipyards in the world, it’s a wonderful way to spend an afternoon in downtown Bremerton.