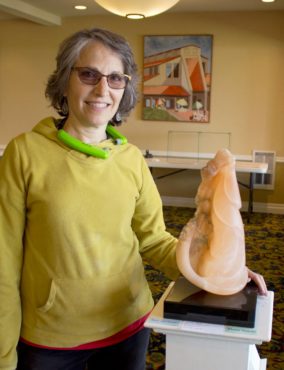 A gentle breeze wafts through the tall trees surrounding the cluster of cabins, tents and canopies in the forest not far from Port Orchard. Friendly voices are mixed with the knock and rattle of air compressors and the rat-ta-tat-tat of hammers, drills and chisels — the tools used by stone carvers who turn common-looking chunks of stone into breathtaking works of art. 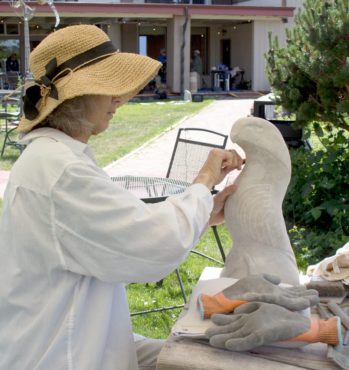 For eight days each July, about a hundred members of the Northwest Stone Sculptors Association take over Camp Pilgrim Firs Conference and Retreat Center to work with stone, commune with nature and enjoy the camaraderie of fellow stone enthusiasts. They camp in cabins, tents and RVs, gathering together at mealtimes in the camp’s dining hall to touch base on the day’s schedule and to catch up with each other socially. 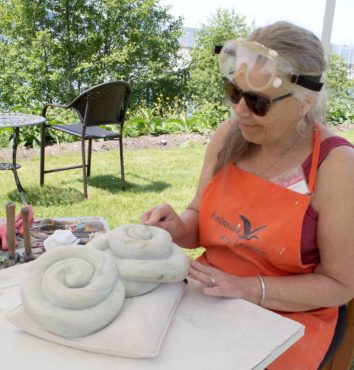 The symposium culminates with an all-day outdoor “Sculpture Walk on the Meadow,” which this year takes place on Saturday, July 13. The Sculpture Walk is open to the public and is an opportunity for stone carvers to show their work in a supportive and appreciative environment, and for stone sculpture aficionados to purchase original work directly from the artists. Symposium participants are asked to bring one or two finished pieces to display, and NWSSA receives a 20 percent commission on sculpture sales.

The Pilgrim Firs Symposium has been hosted at this location for over 30 years, each year drawing more participants and growing in the number of workshops and seminars, while attracting the attention of stone sculptors from the Northwest, across the nation and internationally. 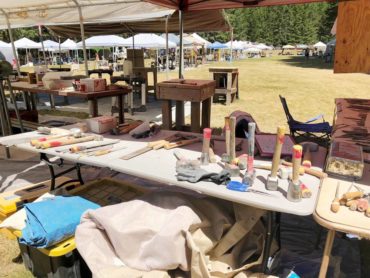 Tons of stone are hauled in to be worked on during the symposium or to be sold and bartered between the participants. Alabaster, granite, soapstone, jade, onyx, basalt, olivine and marble are but a few of the rocks brought to work on, some small enough to be held in the hand, others the size of a Volkswagen bus.

Raw rock transformed into something with shape and form and a soft polished surface is indeed a magical process, requiring patience, understanding of the chemical composition of the material, and an accomplished effort at handling tools. 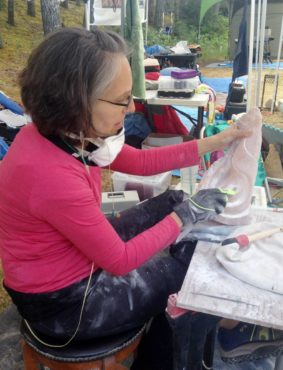 Power cords from generators and electrical sources are carefully strung throughout the canopied work areas in order to drive air compressors, hydraulic hammers, grinders, sanders and chisels. Some of the artists choose to do all of their work by hand, without the use of power, attesting to their strong physique and well-developed muscles. 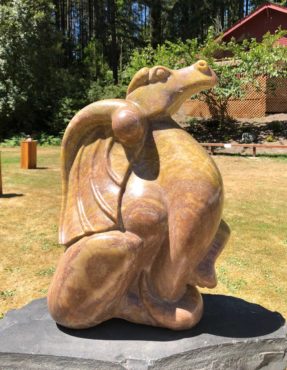 Stone carving was once nearly a lost art, but is regaining popularity among young adults and senior citizens alike. The NWSSA has over 200 registered members, ranging from newbies who are just beginning to try their hand at a new art form, to seasoned members who have been carving for decades.

Sharon Feeney, who resides in Port Orchard, says she began stone work after having “a dream-like experience” and seeing herself sculpting stone.

“My heart started racing, my spine tingled. This was to be listened to and acted upon; thus I started and haven’t stopped,” she said. 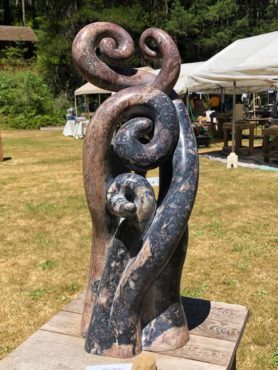 Feeney started carving about 14 years ago and joined NWSSA immediately. A former NWSSA board member, she agrees with others that stone, of the earth, calls to be touched. In the beginning, many also find the greatest challenge is to be able to look at a chunk of stone and visualize the three-dimensional sculpture hiding within. 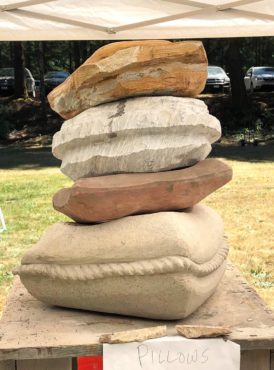 Kim Danner, who hails from Port Townsend, has only been a member of NWSSA for a year, although she has been working in stone intermittently for about 20 years. She feels that interacting with the stone, experiencing the “sensuous nature of touching — reaching an understanding with the stone — is an interactive process.” She says she holds a “deep and joyful anticipation” each time she approaches a stone. 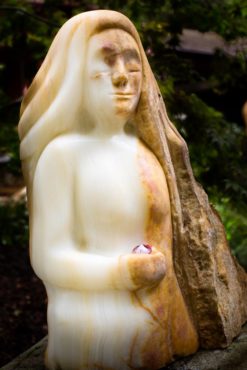 “It is thrilling and grounding simultaneously. The rhythms and ways of each stone are different,” Danner said.

All stone carvers face challenges in working with their heavy, sometimes unyielding medium. For Feeney, keeping the dust out of her eyes is her greatest issue, while Danner struggles to lift the heavy rocks. Others speak of the noise of hammers, chisels and air compressors, while some complain about the cumbersome feeling of protective gear such as goggles, gloves and respirators.

Protective gear is the most important safety feature, however, as it is easy to lose a finger or hand from a hammer or saw, and the lungs can be damaged by breathing stone dust. Feet can be damaged by dropping a large rock on them, and lifting mechanisms are always necessary to avoid damaging the shoulders, knees and spine.

Carvers find stone in as many different ways as there are suitable types of stone for carving. Some travel far and wide on hunting expeditions in deserts and mountain areas, while others search beaches, creeks and rivers for their supplies. 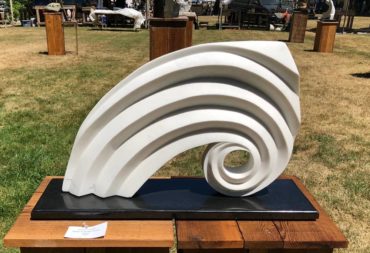 Stone suppliers such as Marenakos Rock Center bring tons of rock and tools and other supplies to the symposium each year. Many stone carvers sell or barter stones with each other, and sometimes friends show up with a rock they found and thought the carver may be able to use. The science of identifying the composition of a particular stone is part of the art of understanding how it will respond to carving.

Danner and Feeney will both be attending the Camp Pilgrim Firs Symposium this July, as it is the highlight of the year for each of them. 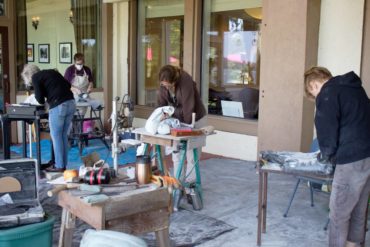 “It is such a supportive group,” Feeney said. “We have masters giving classes and demonstrations, while tool vendors and stone vendors are there to ply their wares.”

This year’s symposium will feature guest artist Dale Enochs leading a “Large Scale Conceptual Public Art” workshop, a “Renaissance of the Figure” group marble workshop with Jason Arkles, “Jade for Everyone” with Dale Blankenship and a beginning stone sculpture workshop. Enochs is nationally renowned for commissioned public works sculptures. Arkles, who lives in Florence, Italy, lectures and teaches, writes and fulfills commissions around the world. Blankenship is a NWSSA member who has been carving figurative sculpture in nephrite jade for over 40 years. 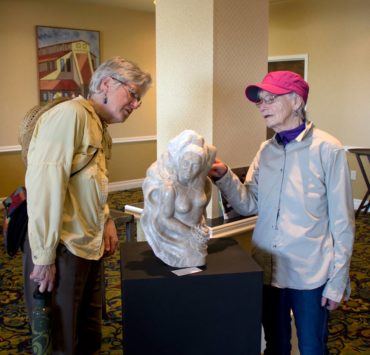 The beginning stone sculpture workshop, led by NWSSA members, is open to anyone interested in learning the art. Loaner tools are available on site for those who have not had enough experience to purchase their own, and also may be checked out by workshop participants traveling from afar and unable to bring their own equipment.

To see stone carvers in action, don’t miss the Open House and Sculpture Walk on July 13. Feeney and Danner will both be working on their individual pieces and may have work for sale. Bring the family for an interesting and educational experience that is free of charge. Talk to artists, see work in progress and learn about the vibrant art of stone carving.

For more information, events, and activities, go to nwssa.org.

3 Tips for Landing a PPP Loan That...