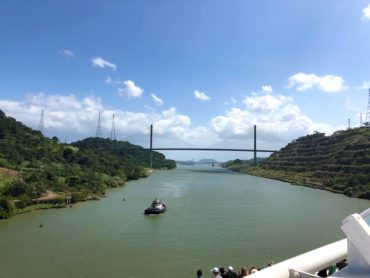 You don’t need to be an engineer or construction worker or sea merchant to appreciate it. In fact, it’s just as fascinating for its historic, geologic and economic attributes. The Panama Canal is one of the ultimate modern-day structures of the world, and cruising through it is diverting for just about anyone.

There are several ways to get out on the water and enjoy passing through the canal as a tourist. If you’re visiting Panama, there are multiple opportunities for day trips from Panama City and the surrounding areas. You can find tours offering ocean-to-ocean trips through the entire canal (about 10 hours) or partial transit tours through the Miraflores locks.

There are many other interesting tours, including fishing on Gatun Lake for peacock bass, snook and tarpon; or enjoying the Panama Canal Railway, the oldest transcontinental railroad in the world. The Spanish laid the original rails in 1501.

For most people, experiencing the Panama Canal will happen on board one of the hundreds of cruise ships (230 in 2017) that sail through the canal each year, some while repositioning and some as part of a regular schedule. 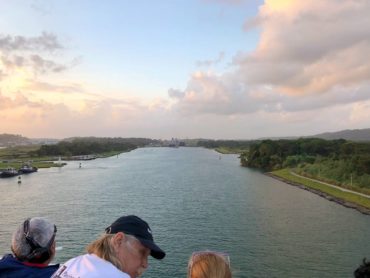 Most Panama Canal itineraries will include a great deal more than just the canal, stopping in ports in the Caribbean, Columbia, Panama, Ecuador, Peru, Chile and others. But the full-day passage of the canal will be the highlight for most cruise guests who choose to experience the canal this way.

The Panama Canal connects the Atlantic and the Pacific oceans, cutting through one of the narrowest saddles of the isthmus that joins North and South America. The canal uses a system of locks with entrance and exit gates that function to raise ships from sea level to the level of Gatun Lake (a man-made lake) about 85 feet above sea level. The Gatun Locks are on the Atlantic side; on the Pacific side, two sets of locks, Miraflores and Pedro Miguel, complete the passage.

Depending on what cruise line you choose, the vessel may stop in Gatun Lake for guests to go ashore on excursions. Other ships will spend the day leisurely sailing through the beautiful lake and the Culebra Cut. Consider the ship’s itinerary before booking if you want to enjoy shore excursions from Gatun Lake.

While transiting through the locks and the lake on a cruise ship, you will enjoy listening to Panama Canal experts over the ship’s public address system. Most ships will also provide lectures on board prior to transit day. Some of the fascinating information you will learn includes:

Most cruise guests won’t even know it, but the cost of their cruise likely includes a surcharge of about $140 per person for the canal toll. Most cruise and container ships will pay between $150,000 to $350,000 per transit, depending on the size of the ship, the cargo and the number of passengers. When the new locks opened in 2016, Norwegian Cruise Lines’ newest and largest NeoPanamax ship, “Bliss,” broke the record for tolls at a whopping $890,000 for one transit.

Interesting to note, all tolls for small ships or large must be paid in cash, three days in advance of sailing. In the early days of the canal, swimmers could transit the locks for 36 cents.

The canal generates more than $2 billion in revenue for Panama, a country that has one of the fastest-growing economies in the world.

On top of all this fascinating history and engineering feats, transiting through the canal is just plain fun. You’ll likely start at sunrise and see alligators on the shore and a vast variety of birds. You’ll wave to the workers in the locks and the crews on the ships passing the other way. You’ll marvel at the geology, the tropical flora and the changing colors of azure blue to tropical green to coffee brown and back again to blue. And you will be astounded at this remarkable construction accomplishment that changed the shipping industry forever.

A full day of entertainment, right from the comfort of your cruise ship. If you’ve ever wondered whether cruising the Panama Canal is for you — it has something for everyone. Enjoy the world’s greatest shortcut.

Want to learn more about the building of the canal? Check out the fascinating book by famed historian David McCullough, “The Path Between the Seas: The Creation of the Panama Canal, 1870-1914.“

What Buyers Really Look at During Property Viewing