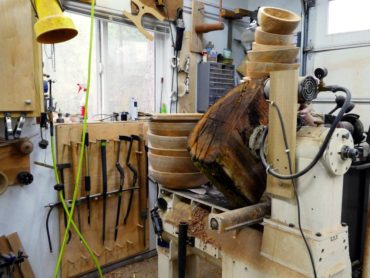 Brad Stave was perhaps born to be a woodworker.

First off, there’s his name, “stave,” which means a vertical wooden plank that’s attached side-by-side to similar planks to make a barrel, bucket or other container.

Then there’s the fact that he received his first toolbox when he was just 5 years old. He scrounged wood scraps and bent nails from nearby construction projects — and he’s been working with wood ever since.

By the time he got to high school, his work was being included in student art shows. That was the beginning of a long, prolific artistic career doing what he loves most. 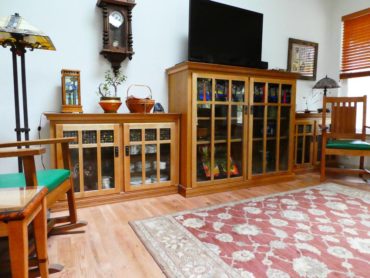 Although he took a brief hiatus from woodworking in college to study graphic design, Stave soon realized that wasn’t where his heart was, so he switched his major to materials and processes technology, with a concentration on wood.

“I spent every spare moment in the woodshop and when I wasn’t there, I built wooden toys and games as my day job,” he said.

After college, he taught woodworking in high schools, including many years in Wyoming, where he taught Arapaho and Shoshone elementary and middle school students the art of woodworking. He also learned to repair antiques on the side and began designing furniture, inspired by James Krenov. Many of his pieces were featured in art galleries. 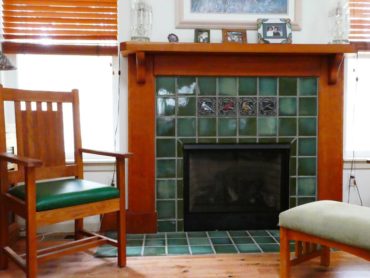 Then in 1985, his wife, Silvia, bought him a wood lathe and Stave discovered a whole new outlet for his creativity.

“From that point on, I knew I had found my niche,” he recalled. “Of all the creative endeavors I’ve pursued, wood-turning has been the most rewarding. Now it’s the pursuit of my heart. There is such a warmth and beauty to wood that other materials don’t have.” 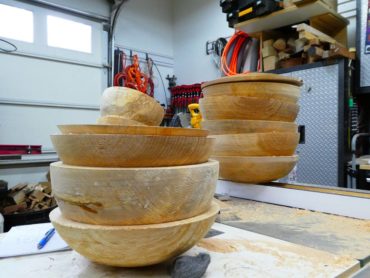 These days, his focus is mostly on making bowls and boxes and he’s adding color, carving and texturing to his pieces.

“About 10 years ago, I took a class in painted turnings because ’round and brown’ gets boring after a while,” he said with a smile. “That has taken my work to a whole other level. The texturing and carving can make a simple turned piece look much more organic.”

On his painted pieces, Stave uses milk paint that he mixes himself. But sometimes “to paint or not to paint” becomes a bit of a struggle. 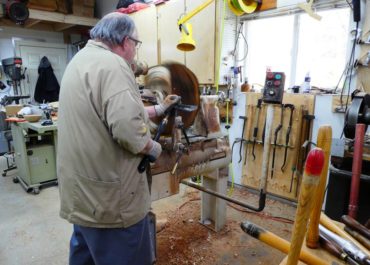 “I say to myself, ‘Wait a minute. This is such a beautiful piece of wood, I need to just leave it alone and let it be natural,'” he said.

Recently, a holly tree near the Sydney Gallery in Port Orchard was cut down and Stave and other members of a local woodworking club divided up the wood. One of Stave’s favorite pieces that he created from the holly is a small container that he’s textured and carved, stained with black leather dye and embellished with his special milk paint. Next year, the woodworking club will present an exhibit at Sydney Gallery of pieces they’ve crafted from the old tree.

Stave also gets wood from friends, and friends of friends, who know about trees that have fallen during storms or otherwise have been taken down. Folks call him about downed trees, he gets in touch with fellow woodworkers and they haul away the fallen wood and turn it into beautiful, functional objects.

Currently he’s creating a series of small cup-size “wonky bowls” carved very thin from hunks of madrona. Because the bowls are so thin, as they dry, they lose their perfect roundness and become very freeform in shape.

“It’s as if each one finds its own natural shape and each is unique and different,” he said. Many of the little bowls are then textured and painted.

Sometimes his pieces are crafted from small chunks of wood like the holly. But just as often he starts with a big log — especially if it’s going to be turned into a large bowl or platter.

“When you crack open a log, you’re never quite sure what you’ll get. That’s part of the beauty and the fun of being a wood artist,” he said.

He hauls them to his lathe, secures them and then “lets the chips fall where they may” as he turns each piece into an artwork. Sometimes when he’s working on a large batch of bowls or platters, there are piles of chips several feet high in his studio.

He cuts his bowls quite thick — about an inch or so — then sets them aside and lets them dry for six or eight months.

After sitting for a while, the bowls lose their “round,” so back to the lathe he goes to “round them up” again. As a finishing touch, every piece is rubbed and polished to a sheen. They’re as beautiful to touch and hold as they are to look at.

When the Staves moved back to Washington permanently in 2006, they built a home in Wauna, on the Key Peninsula. Needless to say, he built most of the cabinetry, the fireplace surround and several pieces of furniture — all, of course, from wood.

Occasionally, he donates pieces to fundraising auctions for local nonprofit organizations. Last year, he cut up an old violin and reconstructed it into an art object for Gig Harbor Altrusa’s “Painted Violins” auction to raise money for the Peninsula Youth Orchestra. The piece brought the highest price at the event.

Stave’s work can be seen at Gallery Row in downtown Gig Harbor.