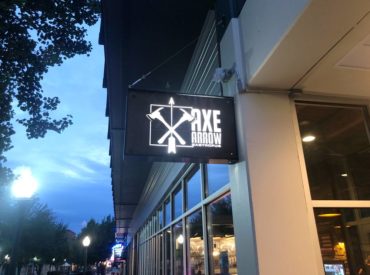 Two Army guys and a fireman walk into a concrete box — and about a year later, they have turned the empty box into Bremerton’s newest and most successful emerging businesses.

The Axe & Arrow Gastropub is the latest addition to the Quincy Square on Fourth revitalization project.

Jack Hastings and Jeremy Burke are both retired U.S. Army Special Forces “Green Berets” and Tom Lemoine is still an active fire captain. Lemoine and Hastings met while their kids were playing water polo together, became friends and tossed around the idea of someday opening a brewpub, somewhere in the West Sound area. As ideas often do, this one began to grow and bear fruit, and long-range planning and preparation began.

Hastings took on an after-retirement job to finance his share of the enterprise, where he worked closely with Burke, an old Army acquaintance. Burke was ready to retire from the Army and felt that joining the group was a perfect fit. Although he was considering retiring in another state, coming to Washington made perfect sense, as there were already family members residing here.

Green Berets and firemen are well prepared for taking on planned calculated risks. They also usually know their way around food and drink. The Army moves its personnel around to far-flung places on the globe on a regular basis, and with 59 years of combined Army experience under their belts, Hastings and Burke were exposed to untold numbers of cultures and exotic cuisines. Lemoine, as a career firefighter, also is comfortable in a kitchen, as meals are frequently prepped and eaten in the station during long shifts.

“The three of us are all foodies and enjoy cooking, so a restaurant was a natural choice,” Hastings says with a grin. “And originally we thought we might like to also include a brewery, but decided with all the great artisan brews already in the area, that would have been redundant.”

Lemoine found the empty historic building during their search for a location. The old Ford dealership showroom space had been empty since the 1980s, and is part of the Quincy Square on Fourth block. The ambitious Bremerton downtown revitalization area was being redeveloped and looking for tenants.

Envisioned by a grassroots group of citizens working for years on a block-by-block renewal of the area, the Quincy Square project was born during a 2014 meeting of 15 citizens hosted by Rice Fergus Miller architects. Soon, a Fourth Street Action Group formed, followed by a community open house in 2016, in which the concept developed for a transformable streetscape that could accommodate day to night businesses, entertainment and community events. As a collaborative effort through public grants funding and private investments, the Quincy Square project is slowly becoming a reality. 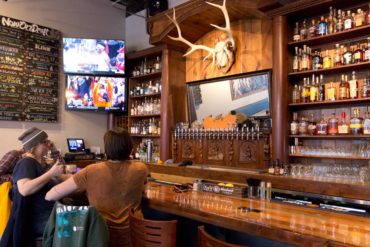 Anchored at the east end of the street by the Fairfield Hotel and on the west by Pacific Avenue, development to convert 4th Street into a people-friendly place has already begun. The final construction phase is scheduled for 2020, when the sidewalks will be converted into a piano key design to honor Quincy Jones, the Square’s namesake, whose first experience with a musical instrument was a piano.

When Burke, Hastings and Lemoine secured the location for Axe & Arrow, Sound West Properties was in the early stages of developing the property. The Roxy Theatre was just getting ready to reopen, and the three partners immediately got involved in putting on a fundraiser — even without a kitchen.

They offered drinks and appetizers at the Roxy and collaborated with the folks at the Admiral Theatre, where they served a five-course meal. The fundraiser was a resounding success, and the three newcomers became immediate members of the neighborhood and part of the revitalization project.

The three partners and their families worked day and night converting the old Ford dealership showroom into a warm and welcoming restaurant and bar space. They did most of the work themselves.

“We stripped the old linoleum off the floors, sanded and stained the concrete, and we discovered the ceiling was constructed of 4-inch Douglas fir car decking, which we cleaned and stained to expose the beauty of the old, natural wood,” Hastings said.

It took the team two months to uncover all the old wood, which had accumulated 75 years’ worth of dirt and grime. The building required all new electricity and plumbing, and of course buildouts for kitchen, bar, service area and restrooms.

Rice Fergus Miller architects did the design work, and the BJC Group of Port Orchard took on the construction, allowing the partners and their families to furnish part of the labor in order to hold down costs. One of the goals the partners shared from the beginning was to self-fund the enterprise without outside investors. The three had learned cooperation and teamwork throughout their careers, and were all willing to do the hard work to realize the success of their project.

With the exception of a few of the smaller tables, all of the wooden furniture and bar is made of reclaimed wood. While most of the wood is sourced locally from Ballard Reuse and came from many old homes in the Seattle area, the fireplace hearth and the coffee table are monkey pod from Hawaii, where both Hastings and Burke served in the military.

An antique carved cabinet, reminiscent of a medieval inn, showcases 20 gleaming tap handles. The cabinet serves as the centerpiece for the rest of the bar back, which was built entirely by the partners of reclaimed Douglas fir nearly 100 years old.

“The bar itself is 26 feet long and made from wood from Boeing, which is a finger-grooved Indonesian wood similar to mahogany. It came from the flooring in Boeing rail cars that had been used to ship completed airplane parts to the final assembly plant,” Hastings explained.

The tables are branded with the Axe & Arrow logo, giving the space an Old-World pub feel. Large windows let in the light, allow passersby to see the activity and lend assurance the restaurant is family-friendly.

The owners chose the color scheme to fit their feeling of the Northwest and did all the painting themselves. They hired an artist to paint the large mural that depicts the history of beer and a few notable milestones in Washington’s brew history, including the fact that Washington is the top hop producer in the country. 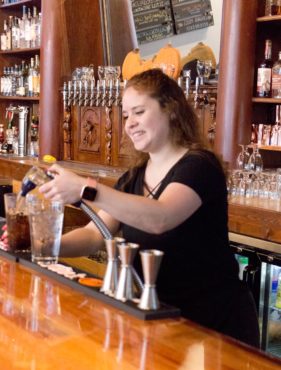 The most pleasing aspect of the Axe & Arrow Gastropub is its well-thought-out food choices. Because each of the three owners came to the business as food lovers and accomplished cooks, they all help with menu suggestions and occasionally get involved personally in the kitchen. 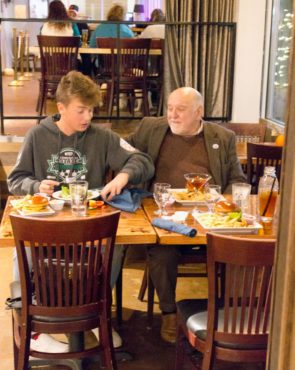 The small, one-page menu emphasizes “Olympics to the Sound” plate offerings that include small-farm, sustainably grown meats; fresh-caught seafood and locally sourced fruits and vegetables whenever possible. The menu can change seasonally as various fruits and vegetable are at their peak and different seafood becomes available.

There are separate menus for lunch and dinner, with small-plate selections offered on each. Halibut tacos and crab-stuffed halibut were two very popular seafood choices recently, and the lobster crab cakes were sellout favorites. A bit of a Pacific Rim influence in the menu offering brings in Kahlua pork sliders, miso salmon and turon (a Filipino banana dessert, deep-fried in a lumpia wrapper). 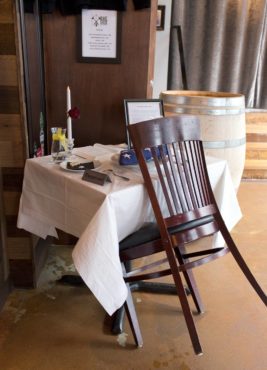 Although the Axe & Arrow does not want to be known as a “burger joint,” it recently won the Washington Battle of the Burger contest in Tacoma at the Cheney Stadium with its half-pound Wagyu beef burger. Served with cheddar cheese and bacon, and fries on the side, it’s a man-sized meal. 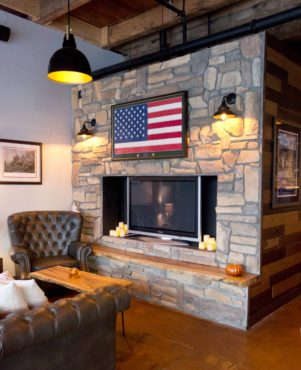 All meals can be split at the table for those with smaller appetites. And, Hastings says, they are always willing to accommodate any special dietary requirement if they are able. Customers should always let their server know if they have a special request.

Twenty rotating drafts fill out the beer menu, which is posted on a huge, colorful blackboard on the bar wall. There are a few house cocktail specialties and a limited wine menu that features Northwest wines almost exclusively. 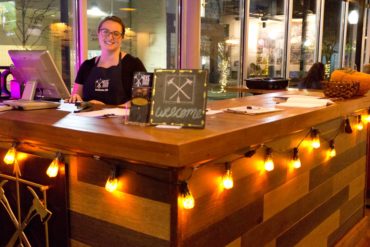 A movable wall separates the bar area from the dining area, allowing them to be separate or combined into one large space. Spaces can be reserved for special occasions, birthday parties, business meetings, etc. and a large screen, projector and sound system are available for presentations. The entire restaurant may be reserved for large, private group functions. Axe & Arrow also caters offsite for groups from 35 to 375, and for events that vary from formal weddings to veterans’ barbecues.

The workload of running a busy restaurant is divided evenly between the three partners. All three have management skills and experience in strategic planning, each taking on the part of running the business that suits him best. Lemoine manages the finances; Burke is the kitchen manager; and Hastings manages bookings, public relations and social media. The three are committed to being community-connected by working with local businesses, clubs and charities to support and enrich the local Bremerton area.

In the grand tradition of gastropubs, Axe & Arrow promises Northwest cuisine prepared from the highest-quality ingredients in a relaxed, sophisticated-rustic, upscale atmosphere, where service to their customers is the priority.