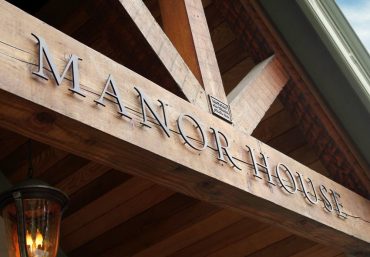 The entrance of the Manor House Restaurant prepares you for a feast for the senses. Beautifully designed and maintained garden beds surround the parking area and building, while a water feature made from vintage musical instruments sings happily next to the walk. Massive, wooden double doors welcome guests stepping into the foyer of the circa 1930s grand home.

Emanuel and Edna Olson built the Tudor-style manor house on the hill that overlooks Pleasant Beach and the old ferry run between Bainbridge and Bremerton. Emanuel’s father, Emil, homesteaded the land in 1898. Edna Olson loved the Tudor-style architecture, which was so prevalent in her home country of England, and the Olsons were able to design and find craftsmen who would build the home to their liking. 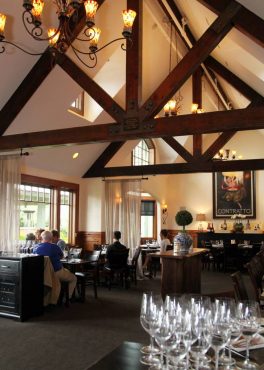 While the home was under construction, they also built a string of Tudor-style buildings across the street that eventually housed a movie theater, general store, restaurant and butcher. Lynwood Center was born and has flourished to the present day. 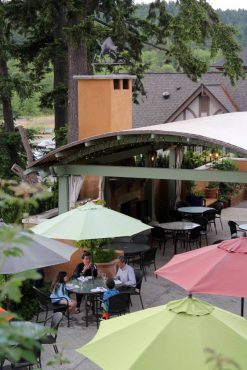 The Manor House — which originally featured a kitchen, dining room, parlor, library and seven bedrooms — is well preserved, with modifications made only where necessary to serve its present use as an upscale dining establishment.

Chef Joe Benish was raised in Indianola and received his formal kitchen training in the Culinary Arts Program at Olympic College. Raised in a family with a love of cooking, Benish and his siblings were exposed to home cooking by their father and to a wide range of cooking TV shows. Young Joe was always willing to help in the family kitchen. 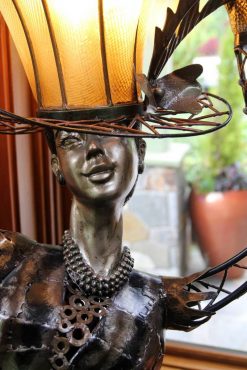 Benish originally thought he would like to play baseball professionally but realized he needed a career that offered a more dependable income. After culinary school, he began his professional life at the Agate Pass Café in Suquamish before moving to The Beach House. The Beach House Bar is next door to the Manor House and part of the same establishment. He soon became head chef of the kitchen that serves the Manor House, The Beach House Bar and the Marketplace, a coffee and sandwich shop downstairs at street level. 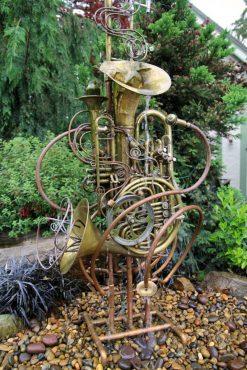 The Manor House building anchors the other structures in the complex, and the imposing entrance welcomes visitors with a promise that the best is yet to come. The original, beautifully rendered woodwork with carved embellishments frames the soaring walls, forming the wainscoting in the living room staircase and bookshelves in the library.

Some original light fixtures remain, while others that complement the décor have been added where necessary. A small bar nestles in the corner of the living room, which serves as the main dining area.

The living room ceiling and upper floor of the original home have been removed to expose the heavy beams and give the room a more expansive feel. Fully paneled walls and cozy seating in the library offer diners a more intimate setting, with a crackling fire behind the art deco fire-screen on chilly evenings and large, open casement windows for ventilation on warm summer nights. 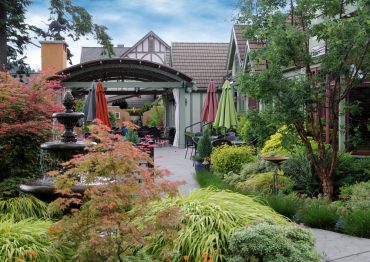 “The library is the most requested spot for those celebrating a wedding anniversary,” Benish says.

The home has served as a restaurant off and on for most of the past 25 years, and the present owners are careful to retain the charm of the original historic space.

A covered veranda that is accessible from the library as well as the main dining room provides outside dining, with heaters to chase away the evening chill with long vistas of Puget Sound. Surrounded by lovely plantings of colorful shrubs and perennials, the veranda is a pleasant and peaceful spot to enjoy an evening meal for any occasion. 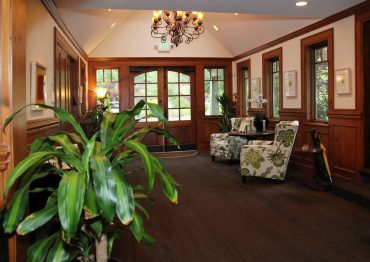 Situated on the far south end of Bainbridge Island, the restaurant gives diners an occasional glimpse of the Bremerton ferry, a Navy sub or even a whale. Outside of the library, on the expansive open patio, is a space for those desiring a summer wedding venue complete with an awesome view and fine catering.

Chef Benish manages the kitchen while his sister, Katy Benish, oversees the dining room staff and manages The Marketplace coffee establishment. Katy is also a graduate of the Olympic culinary arts program, and enjoys the hospitality aspect of the restaurant business. 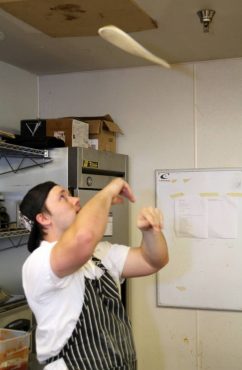 Offering a seasonal menu with foodstuffs sourced from as close to home as possible keeps this young chef continuously busy, planning and directing his kitchen staff. The menu is changed sometimes as frequently as every three to four weeks to accommodate locally available seafood, shellfish and other locally produced meats. 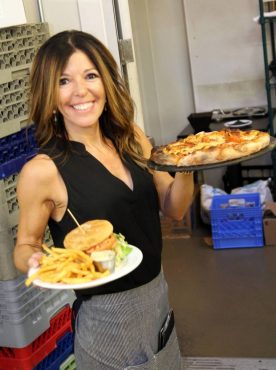 Benish appreciates the local foragers who supply him with sometimes unexpected edibles such as nettles and forest mushrooms, as well as the local farmers markets, where he can buy the freshest produce possible.

When asked what is the most surprising part of his job, he replies, “I didn’t expect to be spending as much time in my office as I do.”

The menu at Manor House is condensed by design, in order to be able to make quick additions and subtractions from it and to retain the quality of meal preparation the chef insists upon.

Due to the location, on an island in Puget Sound, Benish had developed an extensive “oyster program” featuring all local oysters and exploring a wide variety of preparation methods.

“I think our oyster program is the best on the island — or maybe even in the state,” he says with pride. 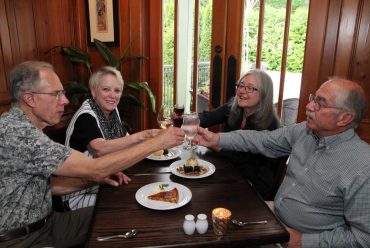 Receiving fresh oyster deliveries several times a week ensures the freshness required for the highest-quality eating. While most patrons order them raw on the half-shell, the briny bivalves are also offered gently cooked as oysters Rockefeller or grilled with lemon garlic butter, or even in a bun as an oyster slider. Other local specialties include fresh pasta from Via Rosa 11 and fresh fish from a local supplier who buys directly from fishermen.

Manor House offers seasonal daily specials, Happy Hour Tuesday through Friday, and 5 p.m. dinner discounts Tuesday through Thursday. There are also occasional special event offerings such as dinner entertainment, holiday brunches and wine-pairing dinners. The restaurant has a lovely, upscale feel but is family friendly, and pricing is typical for the quality of food and dining experience.

Benish is known for his cookbook collection and is reputed to share one occasionally with a dining patron. His favorite, he says without hesitation, is that of Joe Beef, a stylized French cuisine cookbook published by the Joe Beef restaurant of Montreal, Canada. Benish says he appreciates the book because it starts with the basics but encourages the readers to change it up, according to their location and availability of ingredients.

The present owner, Pleasant Beach Properties, LLC, has installed original art throughout the property, with water features, bronze sculptures and a metal whimsical creature here and there. A guide is available at the Pleasant Beach office that features each of the art installations on the premises. Molly MacDonald designed the gardens and landscape.