The Wine Cabinet — The Italian Influence on Washington Wine, Part 2

Bert Pesciallo, whose father immigrated from Genoa, Italy, in 1900, doesn’t remember when he became interested in the winery business. He was pretty young and following in his father’s footsteps.

“Things just happened naturally at that time, when you are a teenager and you grow up with it,” he said. “My interest and curiosity grew to the point where I knew I wanted to grow grapes and make wine.”

A number of the current generation of Italian winemakers trace their interest in winemaking to the influence of family winemaking for home consumption. A good example is one of the best known winemakers in Washington, Leonetti Cellars owner and winemaker Gary Figgins.

His maternal grandparents, the Leonettis, arrived at Ellis Island from Serra Pedace, Calabria (the toe of the boot), Italy in 1906. They traveled to Eastern Washington and homesteaded a 20-acre farm with two creeks outside of Walla Walla, planting grapes on the high ground and crops on the low ground.

They raised hogs, chickens and other animals, and became farmers, raising vegetables in addition to the animals for themselves and for sale. They also raised eight children.

“Grandfather planted a vineyard with Black Prince grapes and made five barrels of wine each year,” Figgins said.

He recalled how the old Italian families like his own made homemade wine from Black Prince grapes and from grapes brought up from California in railroad cars. He told an interesting story about how the Italian families hid barrels of wine from federal agents during Prohibition.

He also remembers family gatherings and Italian weddings with Italian cuisine, wine, music, singing and “the great feeling of the warmth of the wine going down.”

“Bert Pesciallo was the last guy (to make wine commercially) until I started Leonetti Cellars in 1977. I planted grapes in 1974 on the old Leonetti homestead,” Figgins said.

Some of those grapes went into his first wine, which he made in 1978. The 1978 wine was rated as the best cabernet sauvignon in the nation by Wine and Spirits Magazine, propelling Figgins and Leonetti to instant fame.

Figgins has a long and varied experience in making wine. He started as a home winemaker at about age 20, in his grandfather’s tradition.

“When Nancy and I were first married, I made wine every year out of every type of fruit and grape that I could possibly get. We’re talking cherries, choke cherries, elderberries, apricots, strawberries, anything I could ferment, even bananas,” he said.

Figgins gained a lot of knowledge and experience in eight years of experimenting as a home winemaker. 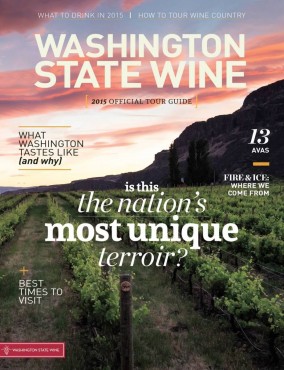 “I guess it just kind of overtook me. I just had a knack for knowing how to unlock everything. Knowledge tempered by experience. And now I have more experience than just about any other winemaker making wine in Washington state, making wine for 33 years, and haven’t missed a year,” he said.

After eight years, Figgins decided to become a commercial winemaker. He got all the books he could find to study the French, Italian and Californian methods. He read, took classes at University of California Davis and traveled to the vineyards and wineries of Italy and France, studying their processes to increase his knowledge. So in 33 years, his ability to make wine has been rewarded by being acknowledged as one of the best.

Another Italian following in his ancestor’s footsteps is Gordy Venneri, co- owner and winemaker of Walla Walla Vintners with Myles Anderson. He described their trip to his ancestral home in Calabria as the inspiration to begin as a home winemaker. This eventually led to the decision to join with Anderson.

“We started making wine after our trip to Italy in 1981 but we were making wine just for ourselves until the fall of 1995. Then we began Walla Walla Vintners and made our first commercial wine that year,” Venneri said.

The Italians who got to Seattle often came after a short stop in California. They found, to their delight, that it was quite possible to enjoy the benefits of city and country life at the same time. They could make good wages in construction and in the mills and, following Italian family tradition, have gardens, rabbits and chickens in the yards of the single- family homes that even working men could afford in this still spacious city.

They arranged with their family and friends in California to send train boxcar loads of zinfandel grapes from places like Lodi so they could make their homemade wine. Bringing grapes in by the boxcar apparently continues to this day. In fact, during grape harvest in Eastern Washington, grapes by the truckload are known to find their way to the Seattle- Tacoma-area for the Italian home winemakers.