How to Build Creativity in Children — Online and Offline (Part 2) 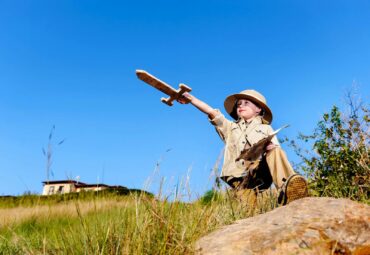 Parents play an important role in fostering creativity in their children during childhood and beyond — and you can do this not only with offline play but also by encouraging the right online activities. Some of the world’s leading researchers and educators have weighed in with their suggestions on how to encourage behavior that develops creativity. (Read Part 1 in this two-part series here.)

Discover the Magic of Fantasy

“Some adults might think that engaging in fantasy is a frivolous or even harmful activity for children’s development, but recent research is starting to show that it has important links with children’s cognitive development,” says Oxford Brookes University principal lecturer Louise Bunce, PhD.

In one study, for example, children who naturally enjoyed engaging in more fantastical activities were found to produce more ideas when asked to name as many red things as possible, and they could act out more ways of moving across a room, such as dancing or cart-wheeling. According to Bunce, “This may be because engaging in fantasy and being creative both involve producing novel ideas that are not tied to reality.”

Imagination also offers a path to help kids boost creativity for fun and to overcome challenges.

“As much as there is outside, I tell kids there’s that much and more on the inside,” says author Charlotte Reznick, PhD.

Reznick recommends breathing exercises that can help kids transport themselves to faraway lands, where they can ask for help with life’s trials in creative ways.

“One shy girl received the gift of a speak-up necklace, while another fearful boy dreamed up a giant white dragon wrapped around his bed allowing him to drift off to sleep, and a teen imagined visiting the Hall of Knowledge to figure out the best way to write an innovative essay,” Reznick says. “These simple tools are bound to inspire.”

Wander and Wonder — in Real Life

As inspiring as the digital realm can be, there’s little out there that can compete with the real world. Studies have shown that engaging with nature, taking a walk or riding a bicycle can encourage creative thinking.

“Find ways each day to allow your child to wander and wonder outdoors,” says professor of psychology Dacher Keltner, PhD. “Build a history with favorite parks, places of nature or places in cities to go to and explore.”

Rather than labeling and explaining everything, Keltner suggests asking questions that point to mysteries and encouraging children to interact with their environments using all five senses.

“Research shows that creative thinking activates the Default Mode Network, which is a set of brain regions that activate when we’re internally focused,” she explains. “When focused on the digital screen, we are by definition focused externally, thus decreasing the opportunity for us to engage in creative thinking.”

A number of studies show that creative people are more open-minded, and that even perceptually, they have more broad attention, so engaging in activities that help to access that open-mindedness can facilitate creative thinking.

Focus on the Joy in the Journey

Creativity involves taking risks and making mistakes, which naturally can be anxiety-inducing. Neuroscientist, operatic soprano and University of San Francisco assistant professor Indre Viskontas, PhD, recommends helping kids learn to appreciate the process of creativity rather than letting them get hung up on outcomes.

“Studies show that external rewards — like gifts or candy — can dampen creativity by devaluing the process,” Viskontas says. “If a kid thinks they’re working at something just to get the reward, it’s not as fun. But if the fun is the work itself, as is the case for so many creative tasks, then both effort and imagination flourish.”

What happens next is just as important, though. Generating new ideas is only the first step, and it’s important for parents to encourage their children to find their creative voice and follow their vision.

“Whether in the arts (12 publishers rejected “Harry Potter”) or science (ulcers are not caused by stress), creativity at this level requires perseverance and grit,” Golinkoff says. “Creativity is not just for geniuses; it’s something we use every day.”

Make it a Family Affair

Creativity is contagious, and when children show a resistance to engaging in certain activities like schoolwork, it’s up to parents to draw them in.

“This past week, my first-grade daughter pushed her chair away from the table when it was time to do math,” says Music with Lindsey YouTube creator Lindsey Judd. “I searched my mind for a creative way to bring her back. Her small toys were on the table — the answer!

“I joyfully asked if she wanted to cover each answer she completed with a toy. We could then reveal each answer by removing each toy. She loved it. Math was no longer about her just completing facts but transformed into a way for her to exercise her own creativity.”

Learning what interests their children and students can offer parents a deep reservoir from which to draw when their creativity is called upon. But parents shouldn’t feel that they have to go it alone. They can also encourage their kids to exercise their creativity by connected with communities of interest, especially online.

“Whether they’re fan creators remixing anime or ‘Harry Potter’ content, or young game designers in Roblox or Minecraft, kids are inspired not only by the work of professional creators, but perhaps more importantly by other kids like them whom they can emulate,” says author and director of the Connected Learning Lab at UC Irvine Mimi Ito, PhD. “For parents who want to foster creativity, I would encourage them to support connection to positive online creative communities that are centered on their children’s interests, such as Scratch for creative coding, game design in Roblox or Little Big Planet, fan art in DeviantArt or videos for TikTok or YouTube.”

Creativity comes in many forms, and it’s up to parents to explore the full spectrum with their children as they grow and evolve.

“Children are strikingly creative when encouraged by loving, observant adults,” says Alice Sterling Honig, PhD, Syracuse University professor emerita of child development. “Give a child a necktie and she or he may conjure how to use it as a seatbelt, a sash, a leash for a doggie, a tail for a kite and further. Play dreamy music like ‘The Skater’s Waltz,’ and toddlers move their bodies in graceful, creative ways.”

Honig says that with gentle support, children can unleash creativity early in a myriad of domains and ways, with an unlimited array of materials and gadgets.

“Nurture their budding talents,” she encourages.

Parents should also be aware that children’s creativity levels may naturally fluctuate with time.

To help get to the bottom of this mystery, Saggar and his colleagues conducted a longitudinal study investigating the neurobehavioral basis of creative thinking ability during middle childhood in a sample of 48 children.

“We found that although some children show a classic decline in creative ability, others exhibit a significant increase in creativity over time. These trajectories were not associated with differences in intelligence, age or sex, but rather other developmentally relevant constructs, including heightened externalizing behavior (i.e., rule-breaking and aggression).”

In the end, the experts agree that creativity is for everyone, and the earlier parents encourage it in their children, the more beneficial it will be in the long run. Creative kids lead to creative adults, and the kind of problem-solving skills that children begin honing in their youth will inevitably come in handy down the line, whether they’re writing a symphony, figuring out an algebra problem, pitching a startup, designing a website or solving a major societal problem.

About Children and Screens

Since its inception in 2013, Children and Screens: Institute of Digital Media and Child Development, has become one of the nation’s leading nonprofit organizations dedicated to advancing and supporting interdisciplinary scientific research, enhancing human capital in the field, informing and educating the public, and advocating for sound public policy for child health and wellness. For more information, see childrenandscreens.com or write to info@childrenandscreens.com.