How to Build Creativity in Children — Online and Offline (Part 1) 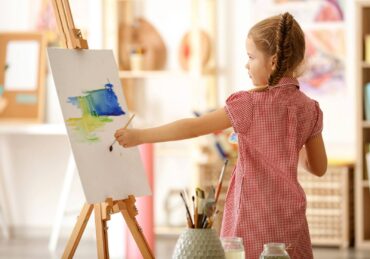 Creativity is a fundamental building block of our humanity. It’s the relentless engine that’s driven progress since the dawn of time and propelled us toward so many of our greatest achievements, from democracy and Darwinism to the Mona Lisa and the moon landing.

And yet, parents often misunderstand creativity, treating it as something relevant only to a life in the arts or some inherent attribute that children are born either with or without.

The truth is that creative thinking is a skill that’s beneficial in every facet of our personal and professional lives, and, just like a muscle, it can be developed and strengthened with the proper training.

What does this training look like in 2021, though, when life takes place online and so many traditional forms of in-person education and socialization are on hold? Some of the world’s leading researchers and educators have weighed in with their suggestions on how to encourage this kind of behavior.

Embrace Your Curious Side

Curiosity and creativity go hand in hand, which means parents should encourage their kids to be open to new experiences and ideas, regardless of their interests.

Kaufman also warns parents to be wary of the stereotypes that often surround creativity, namely that it’s only for “genius” types or that there’s some inherent link between creativity and mental illness or drug use.

“Some personal insights may never be shared or even verbalized, but they still matter,” he explains, “and much of the research suggests that creative action improves mood, manages stress, connects people, enables healing and gives us meaning.”

Award-winning author and speaker Catherine Thimmesh agrees, reminding parents not to limit their children’s creativity to any one field.

For parents wondering how to get started encouraging more creativity in everyday life, she suggests some simple prompts like inviting your child to try something new — even wacky — every day, or challenging them to reimagine common household objects for new purposes and problem solving games.

A blank page, canvas or screen can be intimidating for kids, but sharing examples can help spark their imagination.

“When we run workshops, we always start by showing sample projects,” says Scratch project founder and MIT Media Lab Professor of Learning Research Mitchel Resnick, PhD. “We show a diverse range of projects in hopes of connecting with the interest and passions of participants.”

While there’s always a risk that kids will simply mimic the examples they see, Resnick suggests encouraging them to change or modify whatever they’re working on in ways that insert their own unique voices or add a personal touch.

Think Outside the Box

Open-ended experiences and activities that allow for many possible outcomes can be great tools for inspiring creativity in children.

“For example, when waiting for a meal to arrive at a restaurant, take turns around the table coming up with all the things a napkin could be (hat, beard, mask, sculpture, origami, puppet, etc),” says Susie Monday, author and former director of programs and exhibits at the San Antonio Children’s Museum. “Try the same game with a bar of soap in the bathtub (boat, brick, soap bubble machine).”

Monday also encourages parents to ask their children open-ended questions about whatever they create. With artwork, for instance, rather than simply asking, “What is it?” parents could ask their child to tell them the story behind the picture. Or present questions like:

Zorana Ivcevic Pringle, PhD, senior research scientist and director of the Creativity and Emotions Lab at the Yale Center for Emotional Intelligence, seconds the importance of open-ended, unstructured play time for kids.

“Scaffold younger children’s play with materials that don’t have an inherent obvious use and support exploration for older children,” she suggests. “Popular kit subscriptions are great to teach kids how to follow instructions, but without finding alternate uses for their contents, they won’t stimulate creativity.”

It’s a common misconception that 21st-century kids are less creative than children of past generations because so much of their play is dominated by screens, says LearningWorks for Kids founder Randy Kulman, PhD.

“However, 35 years of research by Dr. Sandra Russ suggests that the opposite is true,” Kulman says.

To make the most of digital play, Kulman recommends sandbox games like Minecraft or Terraria, as well as finding technology that fuels kids’ interests and skills, such as apps that allow them to make videos, take photos, create artwork, play music or build their own worlds.

“One way to think about creativity is as a shift from ‘what is’ to ‘what if’ thinking,” says education and early childhood senior lecturer Mona Sakr, PhD. “In ‘what if’ thinking, children open up their minds to all the possibilities around them.”

Fiona Scott, PhD, lecturer in digital literacies at The University of Sheffield, agrees. “Apps and games that include open-ended activities, which enable children to experiment for themselves, foster creativity,” Scott says. “Those whose design features constrain choice and agency, e.g. by only having a limited number of options to choose from, may shut creativity down.”

Sara DeWitt, vice president of PBS KIDS Digital, agrees, saying, “High-quality digital media can be a great place to inspire creative thinking and encourage imaginative play away from the screen.”

Like Kulman and Sakr, DeWitt suggests steering kids toward games where they can tinker or build structures and machines to test for strength and speed. In addition, preschool role-playing games allow children to make up stories and try out the ways in which characters may interact with one another.

“When a game or activity is based on solid educational principles,” she says, “children can connect what they’ve done on screen to real-world creative play.”

About Children and Screens

Since its inception in 2013, Children and Screens: Institute of Digital Media and Child Development, has become one of the nation’s leading nonprofit organizations dedicated to advancing and supporting interdisciplinary scientific research, enhancing human capital in the field, informing and educating the public, and advocating for sound public policy for child health and wellness. For more information, see childrenandscreens.com or write to info@childrenandscreens.com.