Still Among the Best 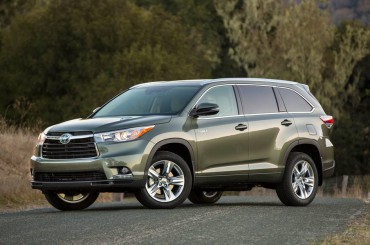 Although not much changed between the 2014 and 2015 model years, I still think the family-friendly 2015 Toyota Highlander is among the absolute best vehicles in this market space. It gets impressive mileage for a midsize crossover SUV — a combined 28 city/highway, while the gasoline-only version is rated at a mere 20.

In my view, Toyota’s Hybrid Synergy Drive is also the best hybrid powerplant package available, and like its gas-only sibling, the Hybrid boasts that hard-to-beat combination of roomy interior, high-quality materials, loads of features and seating for seven.

However, I’m not the only one giving it high marks. The 2015 Highlander was named as the top midsize SUV/crossover in the first ever Kelley Blue Book Best Buy Awards, which recognize the top new vehicle choices available in the U.S. market. The award represents the culmination of a yearlong regimen of expert testing and evaluations that include an in-depth analysis of five-year cost-to-own data, vehicle pricing, sales numbers, actual transaction figures and other retail information, plus consumer reviews and ratings.

However, all that recognition — along with style, amenities and fuel efficiency — doesn’t come cheap. Toyota only offers the Highlander Hybrid in its top two trim levels — Limited and Limited Platinum. While those trim levels are well equipped when compared to a gas-only Highlander, there’s also a premium of several thousand dollars, which has it rivaling many luxury brands on price. 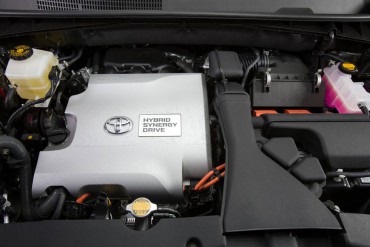 That said, I believe the Highlander Hybrid is worth the extra bucks — especially when compared to its closest rival, the Nissan Pathfinder Hybrid. While the less expensive Pathfinder is a pretty darn good vehicle itself and does score some style points, in my view the Highlander Hybrid offers the best overall combination of power, acceleration, fuel efficiency, interior space and overall comfort in this class. However, Nissan’s luxury brand, Infiniti, does offer a hybrid version of its upscale QX60, which is priced closer to the Highlander — and exceeds it in lavishness. 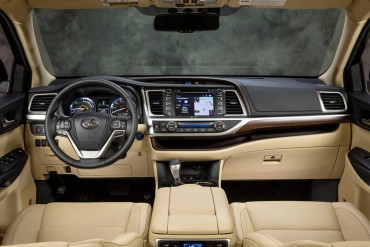 Interior: Some hybrid vehicles offer unique interior features that set them apart from their nonhybrid siblings. The 2015 Toyota Highlander Hybrid does not. For example, instrumentation on some hybrids showcases semi-animated, Disney-style graphics depicting gas/electric power flow and regeneration. Not the Highlander Hybrid. The cabin — like much of the rest of the Highlander — is basically nothing more than a Highlander Limited or Platinum, with a different powertrain. End of story.

While this may disappoint some — especially in light of the Highlander Hybrid’s significantly higher starting price — the upscale interior is nice enough to overcome that objection. For example, supple surfaces cover the dashboard, with understated stitching at the seams. There are a number of handy storage spaces tucked into the 2015 Highlander’s interior, including one under the shared console armrest big enough to hide a large purse. 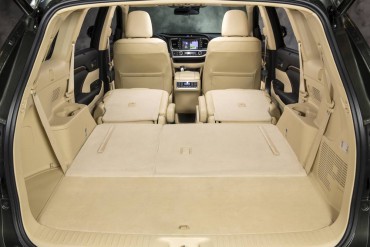 Among the many other standard features are a smart key system for the front doors and liftgate, push button start, remote keyless entry system with illuminated entry, along with ambient interior lighting and tri-zone automatic climate control.

Since the Hybrid only comes in Limited trim with seven-passenger seating standard, it doesn’t offer the usual three-person, second-row bench nonhybrid Highlander models do. Instead, the interior layout features a collapsible side tray with cup holders between two second-row captain’s chairs. They slide farther forward than previously, permitting easier access to the 60/40-split third-row kids’ zone bench with three seats. Adults will find it cramped but the three-across seating does enhance the Highlander’s credentials as a substitute minivan.

While the Highlander Hybrid’s cargo capacity is reduced somewhat by its large battery pack, there’s still considerable storage space with the rear seats folded down. Behind the third row is a usable 13.8 cubic feet of space, expanding to 42.3 with the third row folded, and 83.2 cubic feet of capacity with both rear rows folded.

The Highlander Hybrid’s technology has a very simple, user-friendly feel, with an 8-inch touchscreen with split-screen display, providing crisp graphics, large “virtual” buttons and quickly accessed mode buttons around its perimeter. The standard navigation system is intuitive — unlike some more expensive vehicles, like BMW — while the audio system features old school, left and right volume and tuning knobs. A rear-seat Blu-Ray entertainment system with a 9-inch display is offered as a stand-alone option. 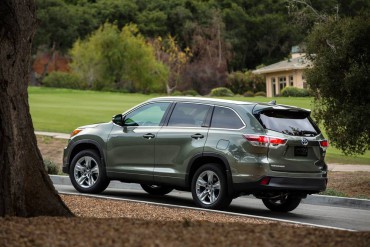 The Highlander Hybrid Limited Platinum (also known as the Platinum package) includes all those items plus a panoramic sunroof, heated steering wheel and heated second-row seats.

Under the Hood: The 2015 Highlander Hybrid is powered by Toyota’s 3.5-liter V6, married to a battery pack feeding multiple electric motors and a continuously variable automatic transmission (CVT). Total output is rated at 280 horses. All-wheel drive is standard. However, under normal conditions, the Highlander operates in front-wheel-drive mode, unless wheel slippage is detected or serious acceleration required. Then the rear axle’s electric motor kicks in for full traction and power. The hybrid-related components, including the HV battery, battery control module, hybrid control module and inverter with converter, are warrantied for eight years or 100,000 miles, whichever comes first.

Behind the Wheel: The 2015 Highlander Hybrid’s strong suite is its undeniable comfort. The cabin is remarkably quiet at highway speeds on a multitude of surfaces, with bumps and ruts generally mitigated by the compliant suspension.

Acceleration is impressive for a 4,861-pound vehicle (350 pounds more than the gas version), doing the 0-60 drill in just under eight seconds — slightly quicker than the average crossover this size, much less a hybrid.

On the road, the Highlander Hybrid feels larger than it is, with a smooth ride, decent handling for a vehicle this size and strong braking. However, as with many hybrids, regenerative braking delivers a slightly different pedal feel that may seem a bit touchy until you’re used to it. The steering is firm and reassuring but a bit heavy at slower speeds.

Properly equipped, the Highlander Hybrid can tow up to 3,500 pounds — 1,500 fewer than the gas-version Highlander.

Whines: The touchscreen — where many operative control functions reside — is positioned slightly too far away from the driver — especially when moving.

Bottom Line: What really sets the 2015 Highlander Hybrid apart is its distinct balance of style, comfort, performance, utility and fuel economy. This is the state of the art for hybrid crossover SUVs — and it comes standard with Toyota’s legendary reliability.