The "butterfly roofline" is characteristic of this classic American style.
January 16, 2023 - Featured, The Home - Comments:
Text by Wendy Tweten Photography by Iklil Gregg 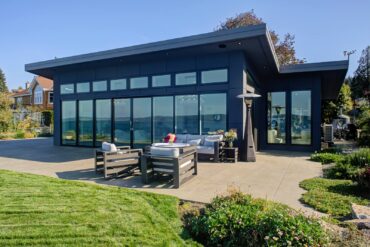 Three years ago, Jeff and Ann Granlee were looking for waterfront. Fortunately, word of mouth and a real estate agent who kept her ears open lead them to a pretty piece of Hood Canal shoreline just south of Vinland Bay in North Kitsap. The property included a home that had begun as a cabin in 1952 and persevered through, Jeff Granlee estimates, five or six additions and remodels over the intervening 70 years.

It was just what the Granlees were looking for: an iconic Northwest setting and a single-story house on which they could put their own stamp. The couple, as owners of JMG Constructors, were in a position to see to much of the renovation themselves. The main thing was that they would retain and accentuate the original style. 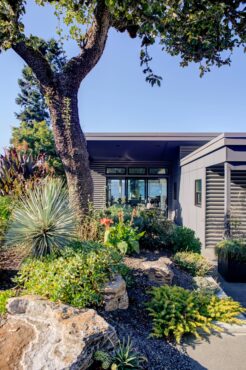 The home was — and still is — a midcentury modern, a style that was especially popular after World War II. The midcentury-modern movement emphasized clean-lined, uncluttered simplicity. The homes are single-story, low in profile and strikingly linear. Although these houses are found across the United States, they were most common in southern California, most notably in Palm Springs. 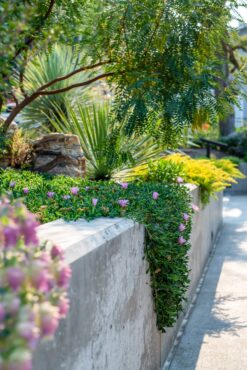 The Granlees’ new home not only checked all of these boxes, it also sported a “butterfly roof,” an element indicative of (but not essential to) midcentury-modern homes. The butterfly roof turns the conventional American roof on its head: Rather than roof panels that slope down and out from a center ridge, the butterfly starts low in the center and slopes up and out for an effect like a butterfly caught mid-flutter.

Time for a Change

Prior to owning their new house, the Granlees had inhabited a craftsman-style home. True to its nature, the home had been all about cozy spaces and warm woods. The couple was excited to create an entirely different vibe in their butterfly-roofed fresh start. They saw the home as an opportunity for a more minimalist mien. Keeping their basic requirements in mind, the couple contracted with home designer Bill Gaughran of Seattle to get the plans on paper. 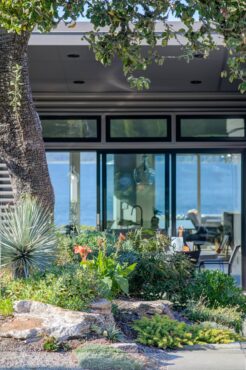 So, the remodel began: a project that would take two years to complete. Part of the delay was complicated structural issues; another was the onset of the pandemic. Fortunately, though many construction-related businesses were forced into temporary closure, Jeff Granlee had the experience to carry on with some of the remodel by himself.

While keeping the midcentury-modern feel, the Granlees chose to enlarge the kitchen to accommodate big family gatherings, at which Jeff serves as head chef and Ann as head baker. In keeping with the beachy, gray-and-white interior, the kitchen combines Northwest gray cabinets and a Cambria solid surface countertop on the large center island. Jeff Granlee’s sister, Judy Granlee Gates, consulted on the cabinetry as well as on other aspects of the interior décor.

Behind a barn door, a pantry off the kitchen has a beverage fridge and plenty of cupboards and countertops for prep work that can be quickly concealed from company. Flooring in the main living areas is French oak engineered hardwood. Cabinetry is StarMark from Joe Gates Construction. 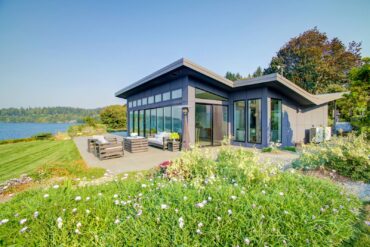 No detail was overlooked. Up and down the hallway, doors sparkle with weighty crystal doorknobs that Ann Granlee discovered at Emtek.com. Bathroom tile includes grand-scale, 10-by-14-inch shower tile and faceted Carrera tile in the bath (the inspiration from which the entire bathroom décor evolved). The tub itself is a luxury, hotel bath.

For above-island lighting, Gates and Granlee chose bowl-like glass pendants. Much of the home’s lovely lighting was selected from online sites such as Pottery Barn, Arhaus and Lamps Plus. The dining room’s rectangular, retro-modern grand waterfall chandelier is by West Elm. 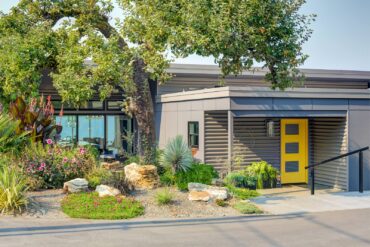 Attending to the Outdoors

The midcentury-modern idyll of bringing the outdoors in through floor-to-ceiling windows fit the setting perfectly. With a view like this, you want to savor every inch. This, however, created an architectural challenge. The entire great room view wall would be glass and need special support. The answer came in the form of a custom-designed, structural steel “moment frame” to hold contemporary, sliding-glass doors that roll back to open nearly the full wall. 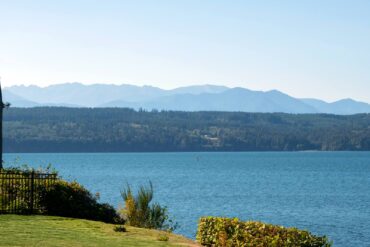 In keeping with the Palm Springs aesthetic, the Granlees wanted landscaping with an arid, desert palette. They found the right landscape designer in Shayne Chandler of Plant LLC of Kingston. Chandler filled the beds and borders with warm-climate beauties that push the boundaries of hardiness for a collector’s dream landscape. Although low and xeric, the plantings are also lush and colorful: Consider the cerulean blue blooms of the agapanthus or the yield-sign yellow of the acacia blossoms, which perfectly match the color of the front door.

In just a bit less than 3,000 square feet, this 21st century, midcentury beauty with the butterfly hat encompasses everything the Granlees wanted in their new home. After two years of filling in the details, each piece chosen with deliberation, the couple has their forever home.