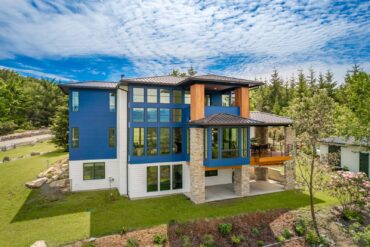 Even though Julia and Dennis Carpenter took on all aspects of the interior architecture and design, they loved the building process. Yes, there were a multitude of details and ongoing decisions, but they had skills and time.

Stepping into the Carpenters’ home demands a moment. There are no words in the face of the intimate view of the Olympics, Dabob Bay and Hood Canal. As if the view is not awesome enough, the home itself requires another moment. The harmony between outside and inside — how the two relate and how each enhances the other — tells a tale of skill and subtlety.

Most couples who build new homes are well into their marriage with established styles of collaboration and teamwork. To steal a line from another pair of Carpenters, Julia and Dennis Carpenter have only just begun, finding and marrying each other later in life. However, both were officers in the military, so their training in focus and decision-making is similar, plus each brought an avocation to the project that served them well.

Julia Carpenter had wanted to train as an architect and although she didn’t, she has an architect’s eye and sensibilities. Dennis Carpenter, a builder by hobby, designed and built the beautiful workshop with a hip roof, an unusual barn door and chunky field stones used as steps. He took on the work of the landscaping project with some design assistance from Julia. It includes a fenced vegetable garden, a gravel zen garden and a weathered split-rail fence surrounded with golden grasses.

Solar panels on the roof generates electricity, which they sell to Puget Sound Energy. This was another of Dennis’ projects, which keeps the electrical bill lower than one stop at Starbucks. Another technical idea he managed uses flat disks of LED down- lights that attach directly to the finished ceiling. Without the standard lighting cans that puncture the gypsum board, the house is exceptionally air-and weather-tight. 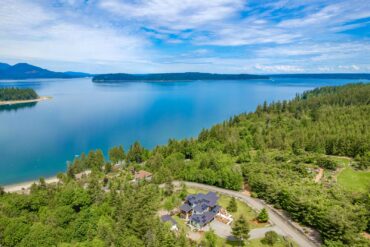 The home’s style is prairie modern. Prairie was the name Frank Lloyd Wright used as he delineated a style of architecture particular to America. He removed interior walls so movement flows from area to area rather than from room to room. (Yes, the first open floor plans.) Openness continues in seamless integration between interior and exterior spaces. His homes mimicked the wide, flat horizons of the prairie with horizontal lines in bands of windows and flatter hip roofs with deep eaves. 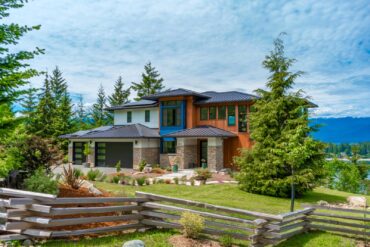 Modern refers to the use of up-to-date materials and building techniques. The Carpenters further defined modern as softer details versus contemporary, which can be cold and hard-edged (as in office buildings). This distinction kept them on their aesthetic track, as did their appreciation of Spanish, American and northern European minimalism. Another motto they followed was “simplicity is best,” returning to it at every decision. 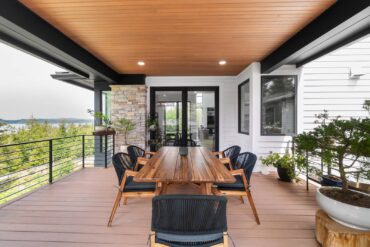 Julia Carpenter looks for balance without symmetry. For instance, the empty space near the fireplace is as essential a design element as the fireplace itself. Following these three guidelines with discipline lead to results most people rely on professionals for. Not only did the Carpenters arrive at a professional outcome, but they also made the home personal in a way it’s hard for a professional to accomplish. This underlying sense is subtle, simple and modern — and balanced without symmetry.

Before getting down to the nitty-gritty of building, Dennis Carpenter, a longtime Seabeck resident, had a house to sell. They put it on the market thinking it would take a while to find buyers. But, boom! The house sold in two weeks — and the new owners wanted to occupy it two weeks later. Of course, they did.

The Carpenters scurried around storing belongings and moving into military housing, which turned out to be an advantage because suddenly, they didn’t have a home to keep up. Being as involved as they were in the outcome of their new home, they needed a great deal of time.

A prodigious amount of research went on before they chose a plan. Early on, a photo turned up that they liked and it hung next to the computer as a reference. Julia poured through Pinterest, Architectural Digest, design and architectural magazines and floor plan websites for ideas and visuals, which Dennis appreciated and that stimulated yet more ideas.

Finally, a house plan was selected, but the estimate came in exceptionally high. They sought another bid with Mike Ritzman of Ritzman Construction. He researched the plan to discover it was engineered and constructed of materials designed for surviving hurricanes — an unlikely event for the Northwest. So far. His analysis impressed the Carpenters to such a degree that when a plan on the website Northwest Architect caught their eye, they brought it to him. At last, the team was complete. 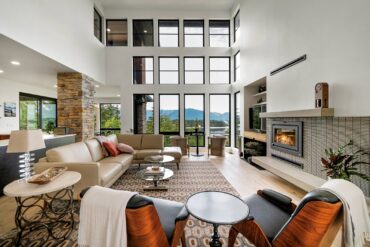 It turns out that the house plan hanging near the computer was designed by the same architect as the one they chose. Furthermore, the house had been built in Bellevue and there were online photos that the Carpenters studied as they worked out their interior aesthetics. Those photos were invaluable, but other than the basic floor plan, the interior architectural details are as different as night and day.

To emphasize a modern quality, trim around the windows was dropped out entirely. In doing so, the windows disappear and the view moves further into the interiors. This choice acted like the LED lights. Since the interior wallboard is not punctured, the home stays airtight and easier to heat. Interior doors are extremely simple: The idea of panels is incised in deep grooves on black doors that are surrounded by the most minimal trim. 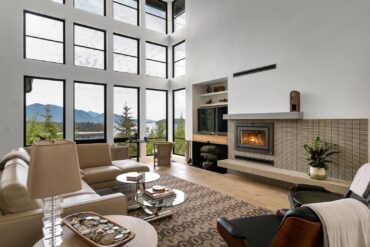 Another decision that furthered the sense of home was in limiting built-in cabinetry to the kitchen, bathrooms and laundry. Julia Carpenter had simple ideas about cabinetry that turned out to be, well, not so simple. They were more European-based and required retooling here. But, in collaborating with Tracy Schroeder at Westside Custom Cabinets, her designs turned into reality. Rectangular openings where fingers can slip in and open the drawer or door eliminate hardware and brought forth the look of the low-luster alder. 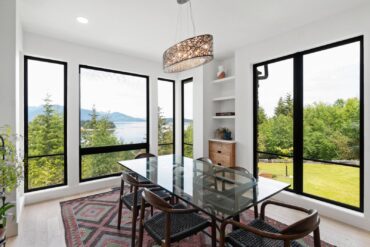 A chandelier of spheres made of translucent shells formed into flowers is suspended in the stairs’ curve. The Carpenters laugh as they tell the story of seeing the spheres at World Import and saying “What if…?” The next thing they knew, they were crawling around on the dining room floor laying out and measuring a tangle of electrical wires attached to two smaller and three larger orbs and a custom ceiling disk. The goal? Figuring out the length of each cord needed to turn these odd parts into a cascading fall of light. 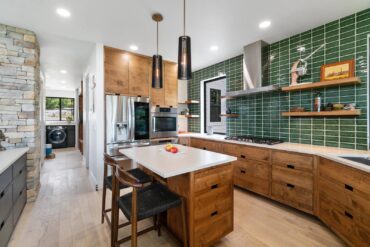 Dennis went up the ladder to attach them and Julia watched from the foot of the stairs. Suddenly, she had the thought he might drop the one he was wrestling with — and he did and she caught it. The chandelier was a whimsical inspiration but its execution is sophisticated and beautiful. The story, of course, will last forever.

Julia also found a Victorian ornamentation called a skiffer. (Wait! What? How did we get to Victorian in this modern home?) Skiffers are black metal, right-angle brackets with rounded cutout shapes similar to what Matisse might have scissored. She went with it and installed them on baseboard corners for protection from scuffs — unexpected and useful. 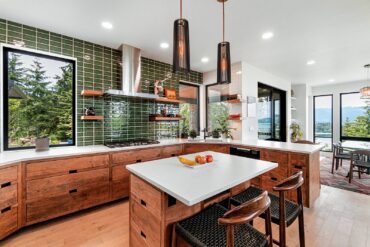 Forest green tiles on the range and sink wall in the kitchen echo the grids found in the windows. Julia eliminated vertical cabinetry and kept the horizontal theme going with a few floating shelves.

A lovely hexagon tile of soft gray, tan and blue slopes off into a smaller tile forming the shower floor in their bath. Surprise! There is no wall or glass enclosure for the shower. Here’s an example where “simplicity is best” leads to “cleaning is easy.” 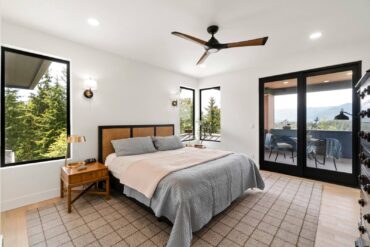 The dining room presents an unexpected visual effect. With a low ceiling, windows on three walls and the falling away of land in a downhill run, there is an illusion of being suspended like on a bridge or bow of a boat. It’s quite a magical experience.

Another optical shift happens on the bridge overlooking the living room. As awe-inspiring as the view is from the main floor, one flight up, it emphasizes the mountains themselves. They appear to rise straight out of the bay and what had been a water- and sky-scape turns into a glorious rising of earth, stone and trees. 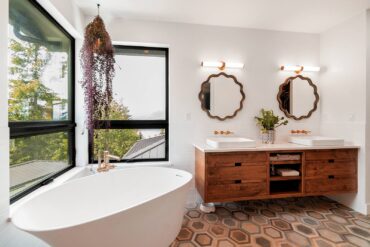 Even though Julia and Dennis Carpenter took on all aspects of the interior architecture and design, they loved the building process. Yes, there were a multitude of details and ongoing decisions, but they had skills and time.

It must be said once more that a home of this caliber is hard to pull off without professionals, but they had a vision, an exceptional view and the joy of working together. Clearly, the Carpenters never lost sight of their ultimate mission. They were building a home to share for life. And they did. And what a home it is.

The Team and suppliers