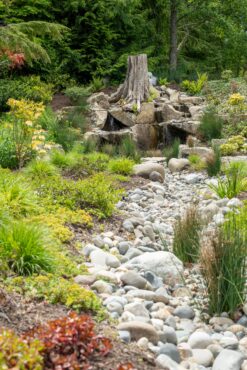 For Stan and Jane Rein, the joining of their lives five years ago led to a second momentous union: that of the duplex Jane had called home for the previous seven years. The two-unit building at Bainbridge Island’s Yeomalt Point sat at the top of a ridge with a commanding view of Puget Sound, running from Whidbey Island to Seattle. From most rooms, the view is enormous. Sky, ships, sailboats, sea life and sunsets. It’s easy to see why the couple chose to purchase the home in 2018 and begin the process of making it whole.

Built in 1956, the duplex had low ceilings, an unfinished basement and a long profile along the view-line. The Reins chose to stay within the existing footprint and maintain the height while stripping the rest to the studs. By finishing the basement and adding an internal staircase (as a duplex, the basement was accessible only from outside), they would increase the functional square footage.

It would be a formidable undertaking. Fortunately, the Reins had professionals who were up to the job, including architect John Gray and Smallwood Construction master carpenter Keith Hunter. The Reins had an idea of what they wanted for their home and Gray interpreted their vision beautifully, displaying a gift for suggesting materials that furthered the effect they had in mind. Hunter proved himself a perfectionist who attended to every detail, crafting several projects by hand, including a sophisticated stairway banister. 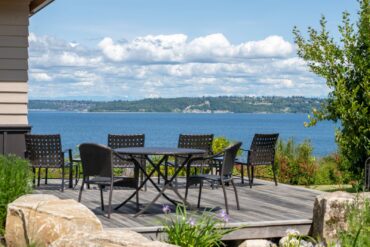 The View as Art

Above all, the Reins wished to pay homage to the setting.

“We wanted the house to be simple and open,” Jane Rein says. “We imagined a big beach house with colors inspired by driftwood.”

Two view decks would be expanded and restructured. Runs of view windows extend the sense of space. The ceilings are now a major feature with wood-stained open beams. Thoughtfully placed skylights add natural light throughout the day. 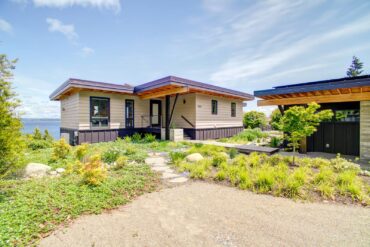 As the interior came together, the Reins painstakingly planned the look with inspiration from online design sites such as Houzz.com. They chose white for the walls and quartz countertop. Floors are engineered white oak hardwood. Kitchen cabinets are stained maple and other cabinets are of re-formed wood (sustainability being an important consideration for the couple, who get their power from 40 solar panels, arranged neatly on the garage roof).

The bathrooms received equally careful consideration. The main floor half bath is a departure from the sand-and-driftwood look of the rest of the house with deep espresso walls and a copper basin. Other bathrooms sport travertine floors, pebble shower floors and shower wall tile that gives the appearance of a cut into the earth. The main bedroom’s attached bath has a soaking tub beneath a window that frames the lovely entry garden like a work of art.

Of course, when it comes to works of art, Puget Sound reigns supreme.

“To us the view here is the ultimate art,” Rein says.

It is, however, not the only art in the home. Indigenous Northwest Coast works are featured on several walls in the form of round cedar panels and a partial canoe paddle. One wall frames the highly textural “Celebration in Agua,” a mixed-media-and-acrylic original by Minnesota-based, Ukrainian artist Olga Krasovska. The ocean-from-outer-space blue of the painting echoes other turquoise touches that accent the beachy tans and neutrals. 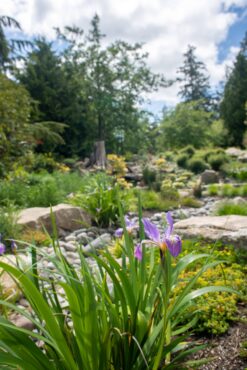 Outside, the Reins wanted grounds that were worthy of the idyllic setting. They got their wish with landscape architects Jeff Bouma and Jeff Peterson of Fischer Bouma Partnership, and installation by Cooper and Sons Landscaping. The low-growing, native-plant garden that resulted has a mountain brook look with swaths of blue star creeper, boulders, a silent stream and a naturalistic water feature complete with a pond and cedar snag. The garden and pond are a favorite of bees and birds, including a family of clever crows. The Reins are awed by the work of Ben Cooper of Cooper and Sons, who proved that setting rock is an art.

In early 2022, the work wrapped up and the Reins moved into their new home, a house no longer divided. An everchanging view, inspired garden and custom-made living spaces: the Reins got the beach cabin they dreamed of. The home has another attribute of the best vacation cottages, a stillness and sense of privacy.

“The quiet here is like gold,” Stan Rein says.