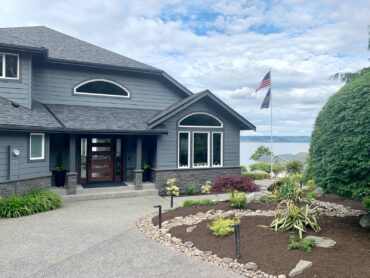 The U.S. Navy brings many people to the shores of Kitsap Peninsula. Some of them come and go. Some recognize the beauty of the peninsula as the home of their heart. When Kimbra Wells Metz and her children first disembarked here, they had lived in Spain for three years and landed in the conglomeration of Navy housing units on West Kingston Road that were soon to be bulldozed. The family set about exploring North Kitsap and shifted living quarters to Gamblewood next. Three years later, she bought a brand new home in the small community of Indianola with its cedars and sandy shore. 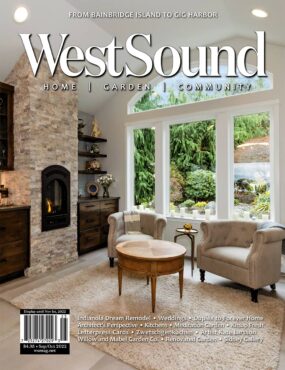 Then as the story goes, she met a fellow naval officer, Dan Metz, at the Kingston Alehouse and as the Navy is apt to do, orders came in for the newly constellated family to relocate. The move took them off the peninsula and all the way to Everett for duty on the USS Abraham Lincoln. However, the couple held on to their home in Indianola as a foothold for their future return. Even as a series of orders moved them up and down the East Coast for years, their dream, their talk and their expectations focused on an eventual return to Kitsap.

The two even commissioned a painting by Max Hayslette of Mount Rainier, the Puget Sound and two small boats while living on the East Coast. Kimbra said it was a joy having the painting in their home while away. As the impact and mysteries of COVID-19 unfolded, Dan received notice he was selected for sea duty back to the Kitsap Peninsula in Bremerton aboard the USS Nimitz.

Their return would be a year away, but they had sold the Indianola house. Who knew how long buying a home would take with the uncertainties of a pandemic looming? Being the positive, proactive team they are, the couple went into strategic action, which, as the saying goes, put fortune on their side.

Surprise! Online and a continent away, they found a home almost immediately. Mary Richards of Windermere/Poulsbo walked and talked them through the home with a video camera and they pored over every listing photo online. It’s a known fact that hotels, meals and people can look very different in virtual reality than they do in real life. However, the couple took a deep breath, made a bold move and bought a home — virtually examined and sight unseen. 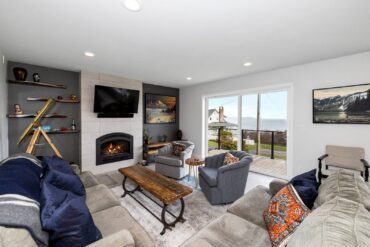 Kimbra Wells Metz flew out with high hopes in mid-July 2020 to see exactly what they had bought. Turns out, the Metz family had won the waterfront lottery and were the proud owners of a 210-degree view of the Cascade Mountain range fronted by Puget Sound with a Seattle skyline. The massive view runs from north of Mount Baker to the skirts of Mount Rainier. It’s not a flat view way out there and far away. It seems to wrap around the house. And it’s dynamic — full of ferries, boats, ships, kayaks, eagles and airplanes for entertainment. Every room has generous windows overlooking the best of the Northwest. What a relief. 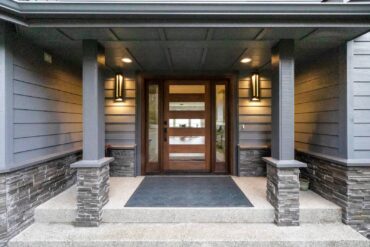 The couple call this “our forever home 1.0” because, well, they are military and, as Metz says, “We’ll see.”

Before moving in, the three-level, 3,200-square-foot, basic spec home was due for a total rework. Meanwhile, COVID was running rampant (still) and they (still) lived on the East Coast. Metz, trained by the Navy with a master’s in healthcare administration, is a strategic planner and techno- and Zoom-savvy, so she had the skills needed to undertake this project. 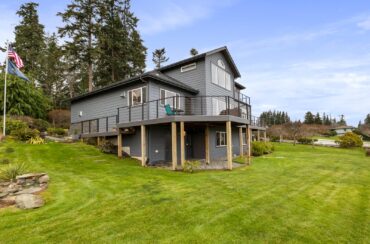 One by one, she pulled her team together. Miles Yanick would be the architect. Metz had worked with Robert Baglio of BJC Builders on a project that didn’t come together but had been impressed with his responsiveness and professionalism. He took on construction duties with Jake Carter as project manager. Later, Yanick brought in Michele Doyle, an interior designer who helped Metz turn the project into the home it is today.

Plans and estimates came together by November, and January 2021 brought them to the permitting process. By February, demolition began. Bulbous river rock on the exterior and around an interior fireplace was replaced with gray stack stone. The large fireplace from the kitchen area moved to the main floor’s living room. A smaller fireplace created a focus point for a sitting area in the kitchen. The kitchen’s island was expanded and reoriented to run lengthwise in the room during a total kitchen remodel. 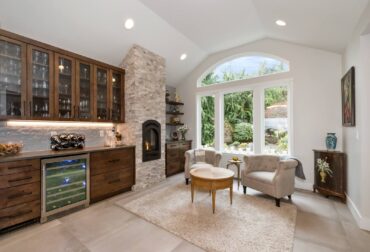 The lofty ceiling in the kitchen needed to join the flat, low ceiling in the dining and living room. Yanick found an elegant marriage between the two areas, which gave the rustic alder cabinetry room to stretch upward and bring dignity and sophistication to the kitchen. The shift to a lower ceiling in the living and dining area and the comfy furnishings underline the sense of home and a comfortable place to hang out, enjoy the fireplace and the fab view out the windows. 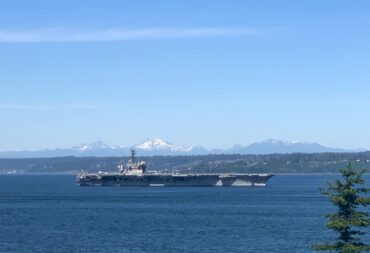 Metz laughed as she described their inspiration for the home as “midcentury-modern with an urban-rustic flair.” Whatever that is, they nailed it.

This is a beach house but nary a sign says so. The nod to sea, beach and sky is pulled off with abstract references. Bubbles appear as clusters of globe lights; a wave shows up in the dining table light fixture. A horizontal theme begins with five horizontal planes of glass in the front door and is extended through the stairway’s railings. The controlled shift between mountain-high entry and kitchen ceilings and the lower ceiling of the living and dining space accentuates the astounding horizontal view and far horizon. 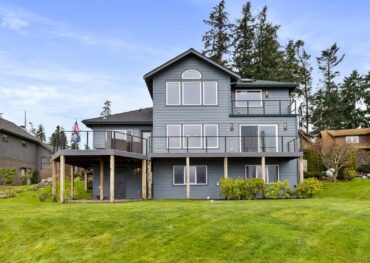 One of Metz’s favorite choices mimics light bouncing off water at the beach. Glass tiles on the kitchen’s backsplash are not subway smooth but rippled like water. Sparkling glints of light enliven the kitchen throughout the day. Quartzite counters echo the flat planes of light on water.

Another delight is the tile flooring. The medium, stone gray tile is large scaled: It grounds the public spaces and brings flows to the main level. It’s cool under foot on warm days and heated from beneath on cool days. 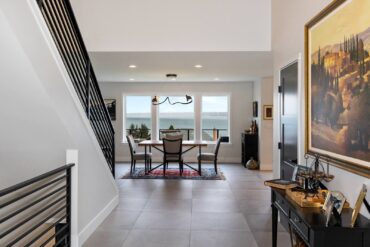 The family’s natural tendency is minimalistic since they are in the Navy and move frequently. But they do pick up rugs and decorative mementos from ports of call and gather thoughtful splurges like their beloved Hayslette painting. These personal items bring an organic blend of textures and colors that soften the edges of the sophisticated architecture and add a casual sense that says home.

The difficulties of remodeling during the last two years forced adjustments in expectations. For instance, the barstools — black or brown leather seemed like the choice but the store didn’t have enough of either. So “or” shifted to “and.” Hence, a whimsical herd of black and dark brown stools gathered around the kitchen’s island. 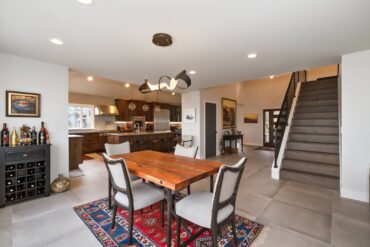 The family returned from Norfolk in spring of 2021 and moved into their updated home in July while work carried on around them. By November, the work was complete, with a few minor punch-list items due to lingering supply issues. Given the scope of the work, the materials needed for such a project and the shifting demands a pandemic presented to employees, finishing this project in nine months represents a big win for all involved.

Kimbra and Dan Metz are pleased that they decided to go further than they had expected with the remodel. The bathrooms and mud room/laundry were folded into the remodel midstream. Considering how much these rooms are used, their remodel brings much pleasure to living in the home. 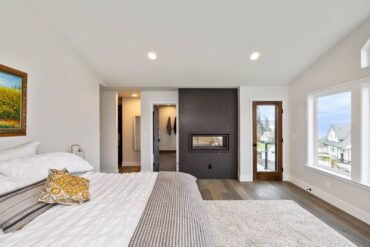 Doyle supported or shifted the Metzes’ choices with three-dimensional renderings since they were far from the developing construction. They only came out once or twice to see the home during reconstruction. The 3D visuals helped them define their aesthetic direction and assure them the home felt approachable.

The couple had gone sleuthing on their own for appliances, fixtures and such before Doyle’s entry to the project. She brought her knowledge of finishes, quality and longevity of various items so that the couple’s ultimate choices brought long-term value for their investment. 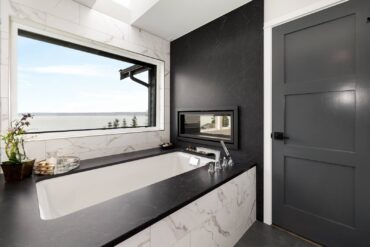 A decision to replace all doors and update the bright brass hardware with painted doors and sueded black finishes on hinges and lever-styled handles came at Doyle’s suggestion. What a difference this decision made in a subtle polish and drama to the remodel.

Metz says she will start with an interior designer in any future project. The addition of Doyle sharpened the finished project in terms of how living in the home feels and flows. And at the end of the project — at the end of the day — that’s the whole point. 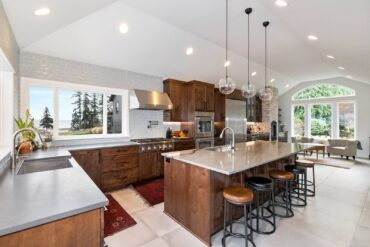 Replacing exterior river rock accents with stacked stone and adding outdoor lighting throughout the property updated the home, too. Still to come, a modest wine cellar is waiting for completion — as soon as the supply chain delivers the materials.

Metz points out that in doing a larger project, economy of scale came into play. The contractor could add projects at a reasonable rate, versus her searching for future contractors to take on smaller projects after the fact. One of the great benefits of a get ‘er done project is that when the remodel is done, it’s over and done.

What’s the best thing about the home now that they have settled in? The peace and quiet. The light, the sky and the water view. Indeed, the astounding view makes this remodel well worth the effort. And then there’s the security of knowing that no matter where or when the Navy selects them for further duty, Kimbra and Dan Metz have a solid home rooted where they want to end up — in the beautiful Pacific Northwest on the Kitsap Peninsula.