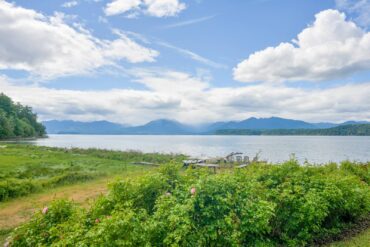 When Hood Canal and the towering peaks of the Olympic Mountains fill your windows like huge, framed prints of paradise, the rest of the house almost doesn’t matter. So says Susan Roe Ramsey of the Hood Canal home that first served as her extended family’s vacation home and is now her own home.

“With this to look at, I think I could live in a tent,” Ramsey declares.

To the south of Ramsey’s property sprawls the Anderson Creek Estuary, a lively and vital wetland that extends the view from The Brothers to Tyler Peak and the foothills far to the north — almost the entire Olympic range. As the seasons turn, the Ramseys watch the sun set from one end of the range to the other: on clear days, a golden ball of fire rolling away behind the mountains; on gray days, a vague, watery blur. 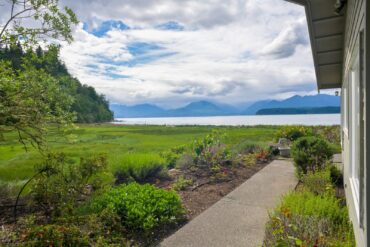 The estuary itself is where Little Anderson Creek meets Hood Canal. Rotted stubs of an old pier are the only sign of a boat landing that once provided a means of transport for produce from the old Glud house, the ruin of which has since been burned for fire department practice. Local legend has it that, in addition to the sober pursuit of farming, the landing also was used during Prohibition to smuggle liquor from Canada.

In contrast to the stoic stillness of the mountains, Hood Canal and its shores are in constant motion. The tidelands to the south are a destination for both human and animal shellfish seekers. Birds, from crows and eagles to herons and Caspian terns, land to hunt and scavenge. It’s an arresting Northwest scene. No wonder Ramsey knew the property was “the one” from the moment she saw it. 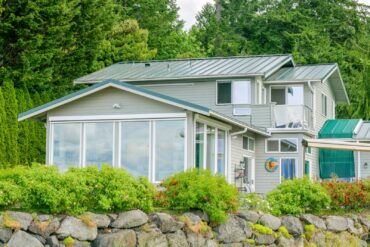 In 1999, Susan Ramsey was searching for a waterfront home as a gathering place for her parents, her five siblings and their children. Following a real estate sign off Anderson Hill Road in Silverdale, she was delighted when the heavy woods opened to an estuary and no-bank waterfront. Ten minutes from Silverdale, it felt like the middle of nowhere, Ramsey says. She wasted no time calling the realtor.

Before long, the property belonged to the family, and Ramsey’s parents were serving as live-in caretakers in the attached mother-in-law unit. The house quickly became the weekend place to be for the tightknit family. The siblings took turns vacationing in the main house or gathering in groups.

“Sometimes we would have 20 or more people here for a big, happy party,” reminisces Ramsey. “We are so fortunate that the cousins grew up together.”

In 2015, Ramsey purchased the property as her own home, but the celebrations continued. In 2019, the property hosted the wedding of the Ramseys’ son, Henry, and his bride, Taylor. The event may have been last minute, but the families eagerly embraced it. 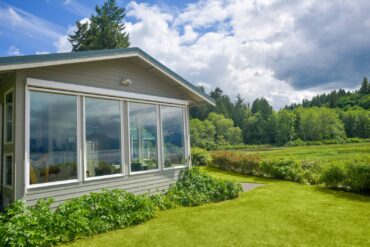 “They called us a week ahead to tell us they wanted to get married here,” recalls Ramsey. “It was short notice, but the families pulled together, and it was beautiful.”

A ceremony on the beach, friends and family, buckets of Ezell’s chicken, and Ramsey’s homemade Norwegian kransekake (a traditional, tiered confection celebrating the family’s heritage) made memories that became even more cherished the following year, when the big wedding the couple had planned for 2020 was cancelled due to COVID-19. 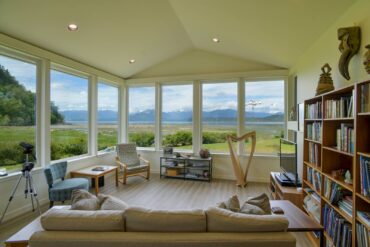 Now that the house was hers, Ramsey began making plans for something she’d thought about for a long time: a remodel to accentuate the view and update the kitchen. The existing view windows of the living room had always puzzled her. The circa-1991 design had designated each of the two front windows as collections of seven windows, like dual shadowboxes breaking Hood Canal into vignettes. Compounding the distraction was a structural beam and a woodstove centered between the clusters of windows.

“It chopped up the view and took away the sense of expanse,” Ramsey notes. 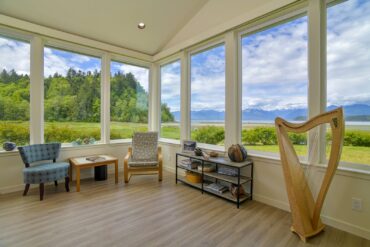 To take charge of the construction, Ramsey hired Michael Glading of Accurate Builders, whom she credits with doing a superior job. As the project progressed, Ramsey also brought in Cheryl Bloom of the Bloom Design Group as a consultant to finesse the design, which she did, including the off-white of the walls, the cabinet colors and the light fixtures.

The clustered living room windows were changed out to picture windows, and the round-bellied woodstove was removed. Automatic shades were installed to both the inside and outside of the windows: blackout interior shades that open top-up or bottom-down, and sunscreen shades at the exterior. 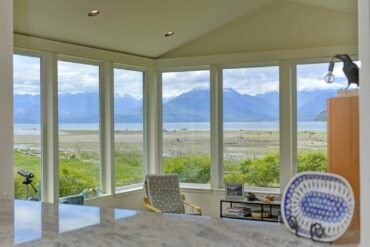 With the view shaping up, it was time to address the kitchen. Definitely the heart of Ramsey’s home, the kitchen sits behind and above the living room, where it revels in its own view through the new picture windows. As Ramsey explains, she wasn’t looking for a “statement” kitchen; her wish was a functional, updated cooking center that retained its connection to the surroundings.

“It’s wonderful to work in the kitchen and still be part of this spectacular setting,” she says. 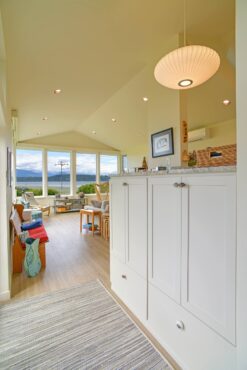 Accurate Builders took the room down to the studs, extending and opening it. Everything was replaced, from the cabinets and appliances to the flooring and even the kitchen sink. In lieu of the typical single, large oven, Ramsey opted for two smaller, stacked ovens. At the view end of the kitchen, they added a seating area with stools. 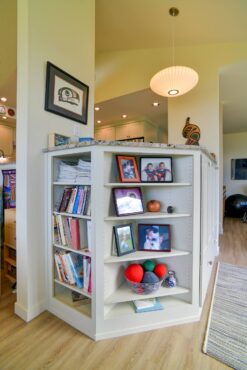 Ramsey is a woman proud of her Nordic heritage. When it came time to choose cabinet colors, she and her designer paid tribute with white upper cabinetry and dark-blue bottom cabinets, a blue reminiscent of rosemaling.

Tired of white tile, Ramsey changed the countertop to granite. Here, Ramsey and Bloom developed another theme, that of bringing the shore indoors. The granite they chose has the grit and flow of a sandy beach at low tide.

In a bit of inspiration, Ramsey created cupboard pulls from tidepool treasures, rocks and shells from her tidelands. Even the Nelson saucer bubble pendant light is rounded and ribbed like a fabulous sea urchin shell.

“The whole idea was to accentuate the tie with nature,” Ramsey says. “When the tide is up to the base of the berm, you can sit on the couch and be almost eye level. It’s like you’re on the shore. It’s a very special place.”