A Welcoming Home of Security and Comfort

May 27, 2021 - Featured, The Home - Comments:
Text by Suzanne O'Clair Photography by Iklil Gregg 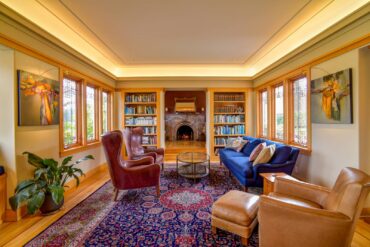 This story starts like an Indiana Jones movie. Before they could build their dream home, Kate and David Beal had to find their property. Find is the operative word here. Arriving at the location marked on the map, they faced a 25-foot-high wall of blackberry vines. Kate remembers they hacked tunnels through the vines and scrambled over roofs of collapsed barns and sheds beneath to see what was beyond. Well, beyond opened up to Liberty Bay and a distant horizon.

Besides blackberry issues, decaying buildings and an arsonist’s fire of the old homestead, the shoreline was littered with multi-ton Navy dirigible anchors abandoned from World War II, old stoves and rusted engine blocks and transmissions. This 13-acre property had been overlooked with reason. 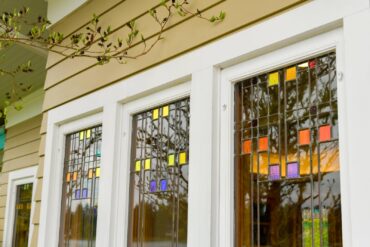 But under the overgrown brambles hid an old orchard with trees bolting straight up on lovely farm land. It would support their plans. As only the second family to own the property, the Beals undertook the shoreline cleanup and rehabilitation of the orchard and meadows, and then planted a laurel hedge large enough to have its own ZIP code.

The hedge is the dominant element meandering across the property. It ends in the west as a perfect circle, holding the berry patch within its extremely controlled straight sides and flat top. Standing 13 feet high, the hedge’s crisp green meanders across the lower landscape as the drive curves through upper pastures and the orchard until they merge at a hidden arch. 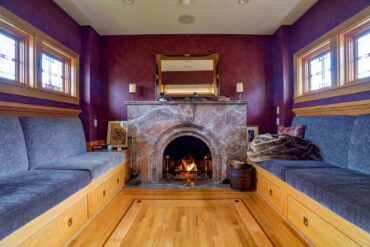 The arch creates a surprising transition. The natural landscape gives way to one with cultivated lawns and gardens surrounding the home. A perfect circle drive of Chinese granite cut into 4-inch squares sets the foundation of David Beal’s repeated use of squares and rectangles. Offset, white-granite rectangles lead to the steps and porch of stacked limestone. The cluster of columns left and right are solid and structural. The house is painted cedar and what might look like a painted fascia is true copper displaying its natural patina.

David is an architect and Kate is an electrical engineer. Together, they’ve touched every area of their property and home with their careful consideration and partnership. 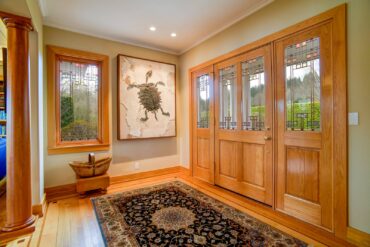 Just as the hedge hid the house, the house hides the bay. The first peek of water shines through the front door. Step into the entry and there it is, Liberty Bay sparkling through symmetrical windows. Step into the living room and gasp, the fireplace nook.

Since leaving the road, visitors experience one delightful discovery after another.

The Beals approached the home’s design with their wildest dreams on the table laid out in bubble charts. David points out this step is essential in gathering all possible wants, needs and ideas before committing to a design. Committing too soon is a critical mistake, he says. 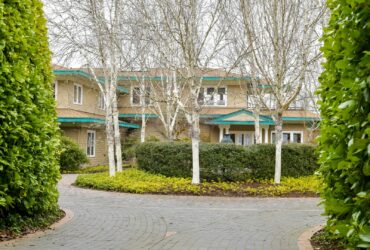 Furthermore, the Beals both had to agree on final plans and details. If they didn’t agree, the decision was delayed while answers were sought. And the budget had to work. Ah, the budget. There’s always a budget.

Solutions came in odd ways. For instance, they wanted a fireplace but the design eluded them until they saw one scene in a 1950s Spencer Tracy/Katherine Hepburn movie called “The Desk Set.” The fireplace had a curved, bull-nose arch that turned out to be surprisingly hard to make in marble. To get a feel of what the couple wanted, their fabrication team watched not just the one scene but the entire movie and bought into the adventure by adding some necessary details. 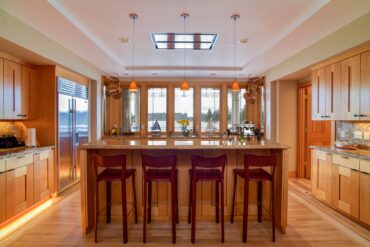 The idea of putting the fireplace in a nook was a takeoff on one that Frank Lloyd Wright designed for his own home. But David Beal imagined a fireplace two steps up from the living room to elevate the hearth and give it prominence. Centered on the main axis of the living and dining rooms, he created an intimate room with built-in benches, lowered ceilings, walls brought in and the floor raised. The massive fireplace can be seen from the stairs, kitchen and entry as well, and it’s the star of the show. Hurrah for Hollywood.

Over long, dark winters, the Beals spend evenings fire-gazing, which they say is downright hypnotizing. Visitors gravitate to this quiet, flickering space. A built-in window seat in the living room is another favored spot for reading and watching bird migrations in the shallows of the bay. 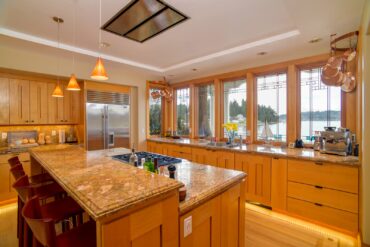 No wonder the home was the AIA Home of the Month in May 1998. Beal, quoted in the Seattle Times, said, “The trend in architecture is to strive for something new, but there are so many great architectural traditions that are old.”

He should know. His career started in Lansing, Michigan, with hands-on experience renovating buildings built in 1890-1910. Straddling the bare beginnings of modern architecture with natural materials and the lingering traditional style found in stonework and metal ornamentation, those buildings taught Beal the value of “truth in materials,” a fundamental principle in his work. He also developed a deft hand at mixing old and new architectural elements. 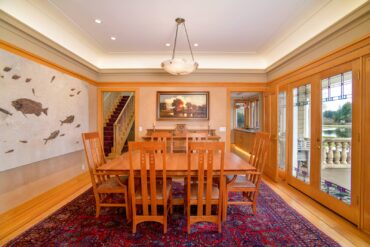 Beal has also come to realize how primal human response is to the surrounding environment. It’s visceral. Homes must give a sense of security and comfort. He uses visual cues to satisfy those instincts. Deep, 2- or 3-foot eaves grant protection from weather. A visible colored-concrete, beveled foundation shows the building’s stability. Limestone steps and porches underline the message of its solid grounding. Walls pierced with windows — rather than walls of window — maintain the integrity of the interior space and gather people in. 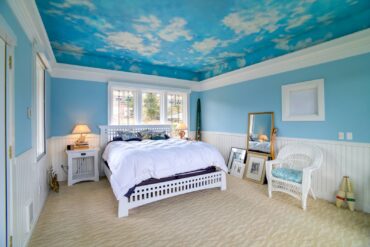 Beal’s architectural vitality comes from geometrical continuity. Squares rule the day starting with the circle drive. Oak floors feature rectangular cherry and maple inlays, with squares of walnut anchoring the corners. Played off against rectangles and squares are rounded columns and half-circle sconces. The light fixture over the structured Mackintosh dining table and chairs is a shallow onyx bowl.

All windows in the home are adorned by dichroic glass laid into angular, copper-mullioned, stained-glass borders. By day, the amber, gold and pure red glass flashes on the exterior, bouncing light outward. The effect makes the home appear to be set with precious jewels. At the same time, when the sun is out, the light is refracted through the same glass and appears as cool blues, greens and purples in the interior. 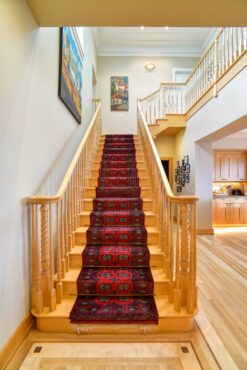 But Beal designed the windows for long Northwest nights. When no light shines through the glass, it reflects the interior lighting, and its true colors of warm red, amber and gold fill the home with a glow. “It’s quite a magical experience,” he says.

The home is intentionally modest and human-scale. The living area is one of two rectangular wings. But, since the couple have worked from home for years, the second wing stacks their individual spacious offices. Windows on three sides overlook the lawn, the hedge and the bay. What a spectacular place to work.

Kate’s kitchen, so called because she undertook its design, sits at an active intersection near the stairs that climb toward a stained-glass skylight and the bedrooms. Protected by a bar island and under a lowered ceiling, the kitchen is a jewel. 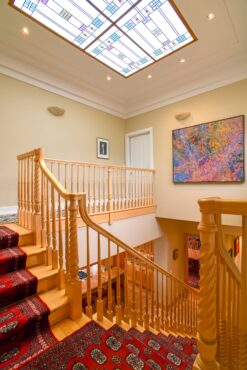 The colors, scale and details — oh, la, la! Rich, warm sienna granite covers the counters. The extremely modified shaker-style cabinetry features wide stiles with a narrow center reveal. Square hardware pulls look like petite morsels of chocolate. The sink counter spans the length of the kitchen and faces the bay. Windows wrap it with two narrow ones on each end. A serious gas range dominates the island.

Kate Beal cooks a broad range of dishes both indoors and out. A discrete outdoor kitchen features a grill and pizza oven. David says Kate’s paper-thin crust pizzas are one of the county’s best secrets.

When asked if they regretted cutting any of their original dream ideas, the Beals gave a definitive no. However, they did upgrade two systems that have undergone dramatic changes since 1996: electronics and technology. They installed a Lutron lighting system with programmable LED lights and a welcome button that activates lights in a dark house and a good-night button that turns all lights off. This system has added to their ease of living.

Home theaters were not available last century but Kate and David Beal are cinephiles. They love movies. So, he retrofitted the library to include a theater with the guidance of Jim Lee, owner of Nuts About Hi-Fi. “He knows what needs to be done and can communicate it from the technical side,” Beal says. “Jim and his team know their stuff.” When asked about future plans, Kate lights up at the idea of new ceiling speakers.

Reclaiming the property and accomplishing this home was a long and worthy adventure. The Beals say time-after-time visitors barely step inside the home before they hear them say, “I could live here.” Lucky them. They do live here. But it wasn’t luck. They created their home — every detail — with intention and partnership.