With its endless-summer, beach-house style, CooperHaven at Sandy Hook is as much about making memories as it is about the view
May 3, 2021 - Featured, The Home - Comments:
Text by Wendy Tweten Photography by Brittany Kelley 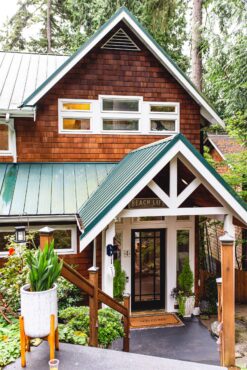 Wetsuits and wakeboards. Swimsuits and sandy feet. Christmas dinners for 18 and a child’s artwork on the walls. Throw in a million-dollar view and a passel of personal touches — and you have arrived at the home of Kelle Kitchel-Cooper and her husband, Eric Cooper, who know the difference between a mere house and a cherished family home. From the entry drive to the shore of the gentle cove between Sandy Hook and Point Bolin, the family has made every inch of this streamlined estate — inside and out — their personal resort. 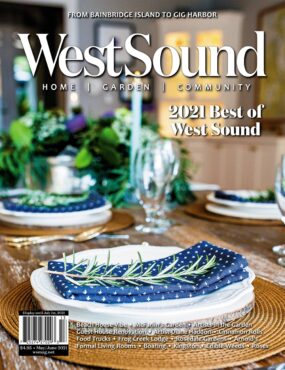 As it happens, the Cooper family — the couple; their daughter, Callaway; and their faithful dog, Lloyd — weren’t looking for a new home three years ago. Cooper, a captain with Hawaiian Airlines, and Kitchel-Cooper, CEO of the marketing firm The Content Scout, were happy in their home of 15 years at Jefferson County’s old South Point ferry dock (a home, incidentally, whose former owner was a producer of the original, 1994 version of “The Crow” and a friend of Leslie Nelson).

One day, a realtor stopped by to say that a client was interested in the Coopers’ house. This client, said the realtor, was willing to “make an offer they couldn’t refuse.” Intrigued, the Coopers let them tour the house. Following the tour, the potential buyers made an offer not only for the house, but for most of the décor as well. 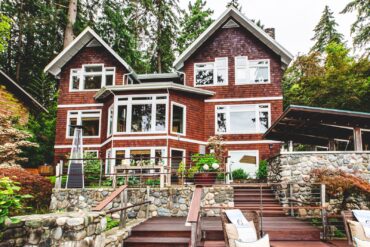 The couple couldn’t refuse. The new owners agreed to allow the Coopers to stay in the home while conducting a speedy search for a new place to live.

Fortunately, Kitchel-Cooper’s friend, Amy Allen, was a realtor — a realtor with a good lead. She knew of a waterfront home along North Kitsap’s Sandy Hook that was set to come on the market. The Coopers would have to act quickly, which was tricky, because they had a few reservations.

For one, the house was big: four bedrooms over four stories, which included a two-story apartment above the garage. The landscape was badly overgrown: tree limbs and brush obscured the backyard and buried the barbecue. And the interior, while lavish, wasn’t their style. 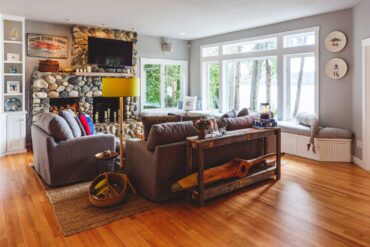 Too Good to Pass Up

On the plus side, waterfront was hard to come by and this piece was exquisite. The view stretches from Agate Pass Bridge to Manzanita Bay. The beach is easily accessible and the water is calm, excellent for activities such as wakeboarding and fly-casting. The house is well-built and well-sited. And the price was right. It was too good to pass up, so the Coopers didn’t.

“We loved the house, as every room has an amazing view,” Kitchel-Cooper says. “And it had been previously remodeled with all the finest materials.” 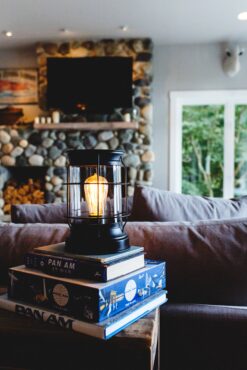 Upon purchasing the home, the Coopers did two things. First, they named their new home, a tradition the family bestows on any property they own. So, the house was christened CooperHaven at Sandy Hook. The second thing they did was — well — everything else.

An enormous task faced them. Although they admired the dark colors, ornate chandeliers and heavy drapes of the Tuscan-villa-inspired interior, it didn’t reflect their taste. Kitchel-Cooper longed for a bright, white, beachside ambiance. She wanted to bring a bit of Malibu to the interior of the Northwest modern exterior. She wanted her home to be simple and welcoming. 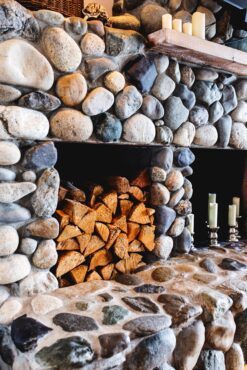 “It had a very formal feel,” she says. “We are not a formal family. We tried to soften the look, so the eye is drawn to the views.”

Fortunately, the structure would remain unchanged, so the renovation — although exhaustive — would be cosmetic. The family moved into the unit above the garage, and Kitchel-Cooper acted as the general contractor, checking on the work of the main house every day. 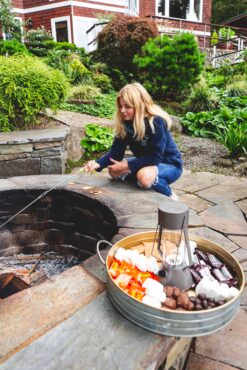 Floors and cabinetry were stripped, interior doors removed to open the view, window coverings removed and all lighting and hardware changed out. With several sitting areas as choices, the formal living room seemed redundant, so it was replaced with a dedicated dining room that seats 12, or more as the guest list demands.

As the project progressed, Kitchel-Cooper confined background colors to near white, with infusions of beachside blue. Walls received coats of Benjamin Moore Silver-Lining and the once dark cabinetry was brightened by Benjamin Moore White Dove. 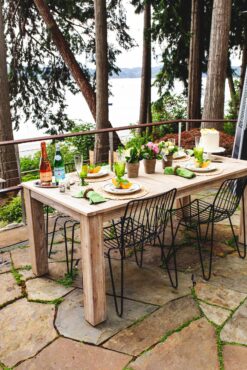 The Coopers hired Michele Doyle of MD Design Group of Poulsbo to design a kitchen bar with seating at both sides. The bar was installed by their contractor, now their estate manager, Franke Santillian of Pacific Sky NW. Over the next few years, the creative Santillian also crafted a hobbit house out of a pesky stump in the Coopers’ side yard, as well as gifting the family with a handsome, handmade model sailing ship — complete with hand-sewn sails — and the table on which it rests. 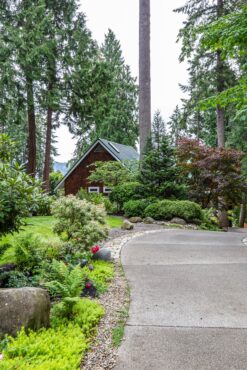 The sailboat was a perfect addition to Kitchel-Cooper’s marine motif. Against one wall rests a vintage waterski from her family beach house on Camano Island; another wall holds a surfboard that she bought alongside a road in Chimacum for a bargain price. The dining room displays a childhood memory in the form of a nautical map of the Puget Sound that she and her father framed together after purchasing it from Metsker Maps in Seattle.

There’s also a nod to Cooper and his father’s careers of flying jetliners for major airlines. In addition to bag tag pillows and mementos of Cooper’s time with Hawaiian Airlines, the home holds a swashbuckling, 80-year-old wooden plane propeller, which fell off a boxcar to be found by Cooper’s father, who was a pilot for Pan Am. 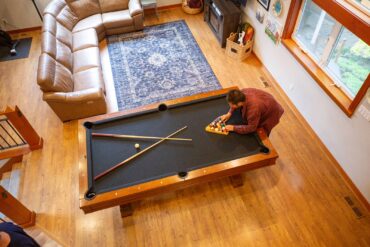 In the landing between the main house and guest quarters, Kitchel-Cooper commissioned a mural by artist Lillian Benge. Benge’s winsome octopus scurries along the bottom of a deep blue wall, while a jellyfish floats by at the ceiling. The octopus theme ties into a painting of an octopus that hangs at the entry.

Other favorite art includes encaustics by Kitchel-Cooper’s friend, Theresa Stirling, as well as pieces sourced both locally and during the family’s many travels. However, no artwork is more cherished than that by daughter Callaway. 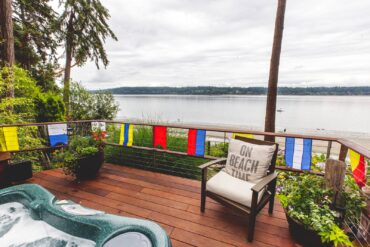 In nine months, most of the interior work was done. The landscape was still a work in progress. After tidying up and uncovering many botanical treasures, there were still walkways to redo and outdoor seating areas to add, including an outdoor kitchen. The ironwood deck was refinished, and Cooper added landscape lighting at every turn, including uplit trees and lighting on all hand railings.

The Coopers are happy in the home where life has led them. With décor that celebrates the setting and a beach outside their back door, it’s a lifestyle they treasure not only for themselves but for the joy of sharing with friends and family.

“We want any guest to feel at home,” Kitchel-Cooper says. “The house is comfortable and reflects how we live. It’s about memories.”