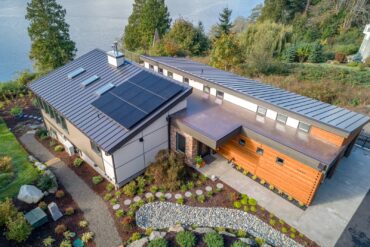 They knew it was trouble from the start. The lot, narrow and sloping, was a big gamble, and Jeff and Meisha Rouser realized there were easier places to build their forever home. Just getting an estimate for the groundwork was a problem; the effort and expense could only be justified by ownership of the property. It was, as Meisha says, a big bogey. The safe bet was to walk away.

But, oh, the view. Not only that, the lot was a unicorn — a rare piece of undeveloped Bainbridge waterfront with an open and sunny aspect. From the west-facing, high-bank property, Agate Pass stretches to either side, with sunsets, sailboat races and the occasional posse of porpoises at play. The Olympic Mountains provide the backdrop, with the peak of The Brothers dead ahead. 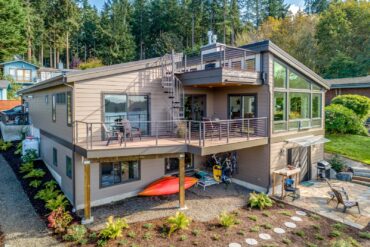 The couple was further charmed by the neighborhood, an island enclave where families stay for the long term.

Temptation, seduction and finally, possession: The Rousers decided to bet it all.

They understood the risk. If the permitting didn’t go through, not only would they have no site for their dream home, they would be the owners of undevelopable and most likely unsalable land.

The sale closed in December 2016. It was time to get to work.

As the bid for permitting began, the Rousers faced yet another complication: The drainage from the neighborhood above came through their property. On the plus side, previous owners had received approval years earlier for a home of just under 3,000 square feet, giving the Rousers an existing footprint to shoot for.

As permitting crept forward, so did the months, but the couple remained hopeful. Their persistence paid off when they received their building permit in August 2018.

It was too soon to celebrate, however. Now it was time for the groundwork. The wet ground was solved with an extensive drainage system of manholes and French drains. By the time the groundwork was complete, the Rousers had a very expensive hole in the ground.

“After the permitting and the groundwork, we were $200,000 in and didn’t even have a house,” Meisha Rouser marvels.

Owing to height restrictions, tight lot lines and a reduced budget, the house itself posed yet another challenge. Realizing this, Rouser put a lot of time and thought into finding an architect. The pair selected Paul Eberharter, a Poulsbo-based architect who knew that this difficult lot would require a unique house. He also understood that an unusual number of factors must be considered. 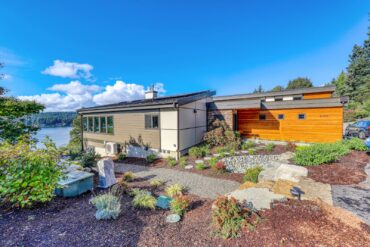 “Several consultants were involved with the site, such as a septic designer, and environmental and civil engineers,” Eberharter says. “Each consultant had to meet their own design requirements. I’d sift through it all to please everybody, especially Meisha and Jeff.”

At first, Rouser had an idea of what she wanted in a new home, but she threw it all out the window once she understood it was the lot that would determine the house.

With the steady patience of the couple’s pet tortoise, Turtle, Rouser and Eberharter crafted a plan for a clean-lined, modern house with dual single-slope roofs, one to either side of a flat-bottomed cleft in the roof running the length of the house from front to back. This roof-with-a-trench brings height to most rooms with two separate rooflines that top out at 8 and 14 feet, respectively. Yet, via the center trench, it maintains the view of the house behind. 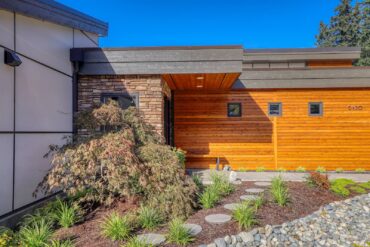 The design, as described by Rouser, “brings every inch of the view and doesn’t feel like a box.”

After all, the view is the point. To deliver it in its entirety, Eberharter designed a steel-framed wall of windows. To bring in extra light, clerestory windows and skylights were added to the shed roofs. The south-facing roof also carries solar panels that provide a 30 percent offset.

Rouser spent months vetting contractors to be ready for the day when construction could begin. She knew the project demanded a builder of both experience and ingenuity. She chose Kitsap Trident Homes, whose co-owner, Justin Ingalls, became an indispensable part of the project. 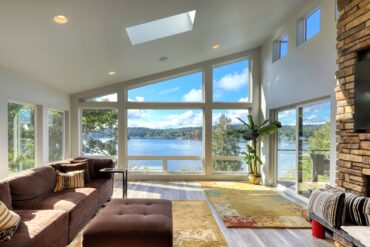 In addition to making the structure come together, Ingalls contributed several money-saving solutions. For example, rather than building the handsome interior barn door of expensive, reclaimed wood, Ingalls used modern lumber, treated to appear vintage. He also devised the Rousers’ favorite outdoor element: a floating deck at the view end of the roof trench. Once a week on date night, the couple climbs the helical staircase to an epic Agate Pass view.

As the structure came together, the Rousers added another member to the team, interior designer Lydia Huffman, who brought great ideas and a great look to a project with a limited footprint and a limited budget. 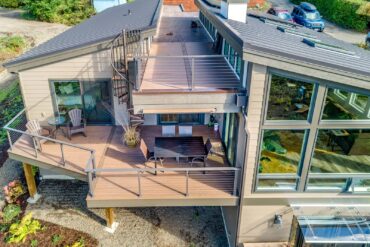 Starting with a base of white and gray, Huffman added earth-element touches of brown woods and chose cabinet and backsplash materials with the look of stone. She also augmented the space-challenged house with storage tucked into every available space. Rouser credits Huffman with 90 percent of the interior design.

Huffman explains, “My team and I understand building and the budgets associated with each portion of the interior and exterior design. I’m thrilled the Rousers love their home — complete design accomplished.” 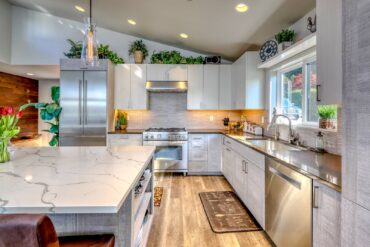 The design is a canny composition of top-of-the-line elements with overtones of good value, such as marble remnant countertops and the kitchen’s Bertazzoni gas stove. Composite flooring is tough enough to stand up to Turtle’s claws. As the house went up, the team brought thoughtful solutions to every room, from the stacked washer and dryer of the bedroom closet, to a Murphy bed in the office, and a second full bath for guests rather than a powder room.

Finally, 16 months after construction began — and four years after purchasing the property — the Rousers moved into their new home. Jeff Rouser appreciates how well-built his new home is and how right it feels. 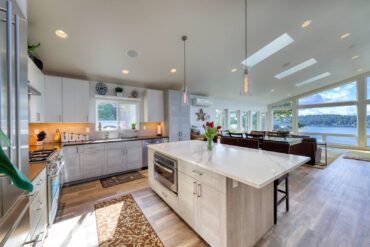 “It surpassed my expectations,” he says. “It’s very comfortable. Meisha deserves so much credit.”

Meisha Rouser sees her four-year odyssey as a life lesson.

“It’s the house we wanted, even if it isn’t the house we originally envisioned,” she says. “It pays to take time to find the right people with the right vision.”

The Rousers’ home is, indeed, a study in patience — a slow and steady process that they can now enjoy at their leisure. Some things are worth the effort.