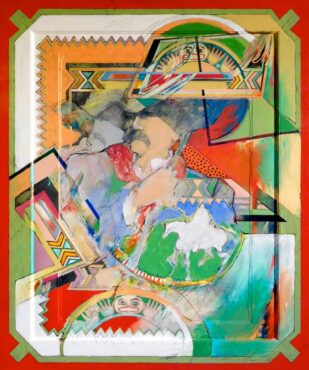 “Great Grandfather” is exactly that, the artist’s great-grandfather, a man who is said to have bitten off another man’s ear in a Montana saloon brawl and homesteaded property where the Bremerton National Airport is now located. A man who helped build the Navy yard by contracting a team of horses to move fill dirt. A man laid-in-rest on the porch of a house where now Monica’s Social Club is located on 6th Street. His name is JW Allen.

He was a good-looking man, with thick, dark handlebar mustache and Western hat. Not a Western hat, but a standard old hat of the times.

Unfortunately, I have only seen a few photos of him. One was of the family standing in front of a cabin on that airport property. Another, a single portrait of JW, is in the permanent collection of the Kitsap County Historical Society & Museum in Bremerton on 4th Street, where the proposed Quincy Jones Square will be located.

Twenty-five years back, that imagery of my great-grandfather became a symbol to represent all men and was used in many paintings.

This large, mixed-media painting, “Great Grandfather,” is 42 by 35 inches. It’s a complicated compositional journey, as the elements of design seem to dance in an ornate bordered arena.

I like to interpret the movement and feeling of time with circles and floating shapes, especially Northwest Coast patterns. You will notice repeated linear corners and points that create a bit of anxiety to the viewer. This is intentional to further interpret the feeling of movement and the struggle of time in those turn-of-the-century days. The horse — there’s always horses, as it represents them and me, since I have also had horses.

This painting will be featured in the history museum through February. Some may wonder why “Amy’s One Painting?” Simply because museums are struggling during this unusual period, and I have been personally and professionally connected with the downtown museums.

For four years, the Puget Sound Navy Museum was my neighbor. The Kitsap County Historical Society & Museum partnered with the Amy Burnett Gallery on many gala events and the famous Valentinetti Puppet Museum sometimes displayed in my art gallery, and we provided it with storage space.

It should be noted that the award-winning puppet museum, now located on the mezzanine of the county’s historic museum, is one of the most historically significant puppet museums on the West Coast. My presentations may bring more awareness.

The “Great Grandfather” painting is for sale and all proceeds go to the Valentinetti Puppet Museum, the Kitsap County Historic Society & Museum and the ArtHouse. The painting will be set up so it can be seen not only from inside on open days but also from the outside. In March, I will present another “Amy’s One Painting” with the theme of local salmon recovery.

In February, I will give a special talk at the 4th Street location about the “Great Grandfather” painting and its related history to the community. For dates, times and open hours, contact the museum at 360-479-6226.