From Setback to Saving Grace

A Kitsap-bound couple finds that good things come to those who wait.
August 27, 2020 - Featured, The Home - Comments:
Text by Wendy Tweten Photography by Kelvin Hughes 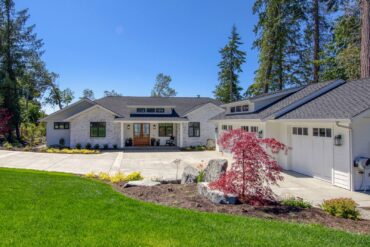 Frustration is not always a bad thing. Just ask Lemolo’s Owen and Paulette Lubin, who learned about the hidden blessings of disappointment several years ago as they worked to make a move from Seattle to Kitsap County. The allure of Kitsap’s comparatively rural lifestyle inspired Paulette Lubin to begin serious property hunting on the west side of Puget Sound, and for two years, she watched websites and combed real estate listings almost daily. Although the couple wasn’t fussy about which community they would call home, they did have two requirements: They wanted raw land to build the home of their dreams, and they wanted waterfront. 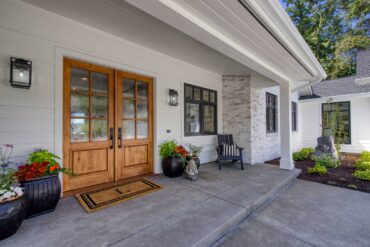 Eventually, they found a likely property in Chico. Negotiations opened and offers were exchanged, but in the end, the property went to someone else. Thus, frustration. After all her hard work and hope, Lubin was discouraged. For a time, she stopped looking and checking online.

Fortunately, the couple couldn’t let their dream go, and eventually Lubin returned to her search. It was then that she found “the one.” Or rather, the two, as it was actually a pair of lovely Lemolo lots that fell into their laps. 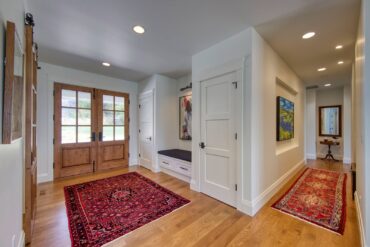 The land was simply gorgeous — 170 feet of undeveloped waterfront with a 180-degree view of Ne Si Ka Bay and the lights of the Keyport base directly across the water. Sailboats and eagles glided by, otters frolicked and the neighboring greenspace held enormous and ancient evergreens. The Lubins wasted no time making an offer. To their relief, it was accepted.

Once the couple had the two properties, their first job was to move the property lines. Both the original lots ran from the shore to the uplands. The Lubins worked with Kitsap County to rezone the land, making the entire shoreline section one parcel and the uplands the second. 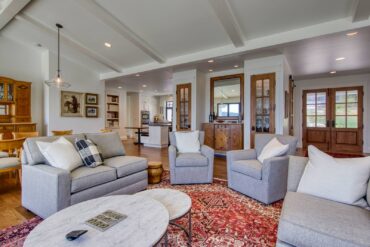 They quickly found a buyer for the uplands and began researching builders. They chose Kitsap Trident Homes, a decision for which they were grateful throughout the project.

The Lubins liked the layout of their former home to a point. They’d spent a lot of years reimagining the house and how they’d tweak it if they had the chance. Now that they could have it their way, they chose to keep the rambler style and the general floorplan. 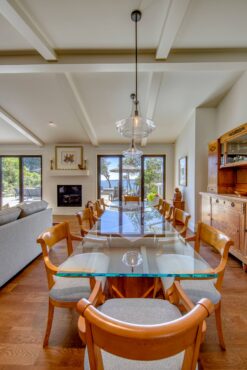 Ceilings would be 9 foot and the floors would be oak. Owen Lubin credits his wife with most of the design. With a background in construction, she worked with Justin Ingalls of Kitsap Trident to create the design, which was then sent to an engineer for structural considerations. 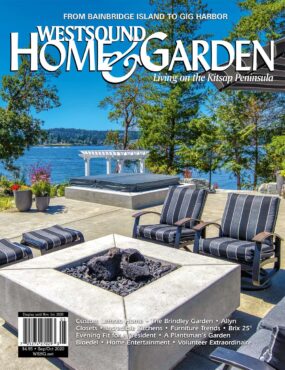 As work on their home progressed, both Lubins partnered with the contractors in day-to-day decisions. Owen, owner of National Glass Industries of Woodinville, not only participated in the layout, but brought his expertise in glass to bear in many areas, such as three sets of NanaWall door systems. In the kitchen, a clever, built-in bulletin board of white-painted, magnetic glass keeps family photos and shopping lists aloft with earth magnets. Entry doors are 2-inch-thick works of art crafted in Mexico and set with opaque, seedy, reamy glass from National Glass Industries. In a final reflection of the family’s affinity for glass, the couple filled the house with mirrors, most notably the framed mirror of the living room, set on the back wall to reflect the view, giving viewers the impression of being surrounded by water. 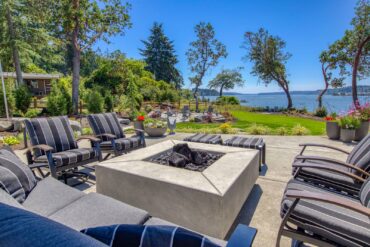 The Lubins knew what they wanted in a home. A big kitchen was a must, as were large spaces for family gatherings and entertaining.

Their old house had lots of color, and they were ready for a change. In this house, the theme would be black and white: white walls, black trim, with a few touches of gray or wall color so subtle as to be just this side of white. The clean, uncluttered palette also reflects the beachside reality of the new house.

Paulette Lubin designed niches throughout the home, little nooks just the right size to hold a vintage chest, built-in seating, cookbooks or a piece of artwork such as the painting by Ryan Molenkamp that portrays the Lubins’ view in bold blues and greens. Good ideas and tasteful touches abound, such as the handsome interior sliding barn doors, shiplap siding as a bedroom wall accent and motorized blinds. Countertops in the kitchen, bathrooms and laundry are all solid surface installed by Creative Countertops of Poulsbo. 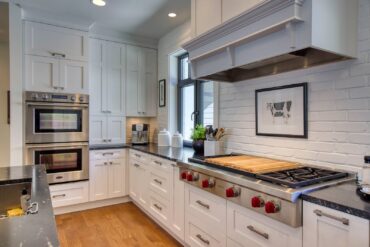 Owen Lubin particularly appreciates certain features of his new home, including the rain-shower head of the owners’ suite bathroom and the tough-as-nails epoxy floor of the three-bay garage. His home office was put to work directly, owing to the couple’s move in the middle of the work-from-home order. When the work is done, the pair can relax in the recliners of a media room with a home-theater-sized screen.

Happily, the leisure continues out-of-doors to their large, waterside yard. The Lubins credit Ben Cooper & Sons Landscaping for inspired plantings and the placement of thousands of pounds of landscape rock. In one area, coming down off the concrete patio slab, the big rocks form an organic stairway. 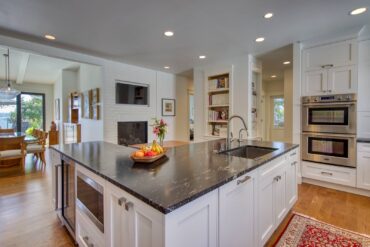 From the patio or hot tub, or by the glow of either the natural or the lava rock firepit, persons lounging bayside enjoy a best-of-the-Northwest view in which robust madrones frame a marine scene of wildlife and brief glimpses of the Bremerton ferry, and the sounds of reveille and taps drift across the bay from the naval base.

In hindsight, the Lubins are grateful that the deal on the Chico property fell through. What seemed a setback was in fact a saving grace. The couple sees life in Kitsap as friendly and lived at a slower pace than what they’re used to. It’s a feeling Paulette thinks of as “island time.” Owen explains the joy of their first home by the water by simply saying,”I’d rather go sit outside now than do almost anything else.” 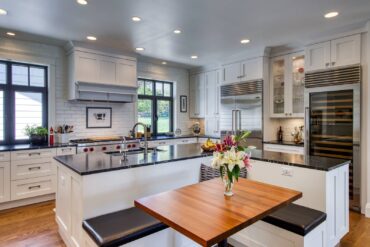