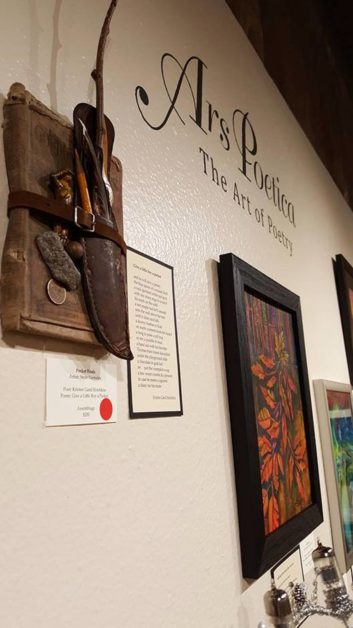 “Ut pictura poesis,” wrote the Roman poet, Horace. In his seminal guide for fellow poets, “Ars Poetica” (The Art of Poetry), he urged them to write poetry with the same deliberation a painter would give a painting. “As is painting, so is poetry,” he instructed.

With Horace as their muse, in 2011, the West Sound arts community paired local poets and artists in an inaugural collaborative celebration of art and poetry that showcased the creative talent in Kitsap, Mason and Jefferson counties, and called it Ars Poetica. The event was a success. This April will be the ninth annual three-county showcase of art inspired by written word.

Jeffrey Kooker, general manager of Poulsbohemian Coffee House, says the collaboration with Ars Poetica is a natural one for the coffeeshop.

“Our walls have always been a rotating art gallery of local artists’ works and for years, we’ve hosted Armchair Poetry Reading, a monthly evening of poetry read by featured poets,” he says.

In 2019, 47 poets from Kitsap, Mason and Jefferson submitted a total of 138 poems by the January submission deadline, according to Sharon Svendsen, the Ars Poetica coordinator. Poets can submit up to three poems, each not more than 26 lines in length.

“The poems are put into a blind judging file,” explains Svendsen, “and a panel juries through the best ones. A total of 123 poems made it through the process last year.” 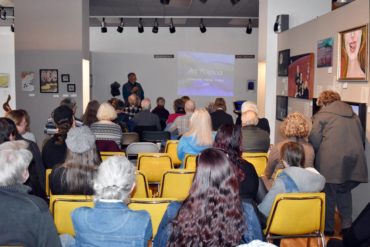 The juried poems are then sent to the four exhibit venues, where local artists choose one or more, interpreting each into a piece of artwork. Lately, the poetry has inspired art mediums unimaginable in Horace’s day. In 2019, photographers were encouraged to interpret poem into photo. In 2020, the writing and fiber arts studios at the Bainbridge Artisan Resource Network (barn) are sponsoring their own Ars Poetica pairings, a fusion of poetry with fiber arts.

Poet Dawn Henthorn has contributed her poems for five of the event’s nine years.

“I love how Ars Poetica feeds both poetry and art — one inspiring the other,” Henthorn says. “To my mind, it is an opening up of conversations between the written word and visual expression for all — poet, artist and the public.”

Last year, photographer Dawn Bockus chose Henthorn’s poem and created a photo-collage in a black-and-white technique. Henthorn says the collage was very compelling as it “heightened a dreamy feeling” and at the same time showed the hawk’s intensity of purpose.

“I’ve thought of this often since the show, and it reminds me to respect, and trust, the power of my words,” she says.

Bainbridge poet Nancy Taylor heard about Ars Poetica when she moved to the island four years ago.

“I love art and I was curious to see how my poems would be interpreted,” she says. “Artist Shelly Wilkerson created a rendition that is incredibly detailed and closely depicts the poem.”

For Poulsbo artist Harv Kolln, who selected poet Martha Cutting’s 2019 poem about a new wheelchair, the inspiration to participate was “the challenge of pairing the verbal and visual arts.”

In April, each venue organizes a month-long exhibition of the paired poems and interpretive artworks, as well as an evening, open to the public, in which the poets read their poem, followed by the paired artists discussing their interpretation of it. Tentative dates for the 2020 readings are Poulsbohemian Coffee House, April 4; Collective Visions Gallery, April 15; Front Street Gallery, April 26; and the Bainbridge Island Library, May 1.

The following is a sample of last year’s art and poetry collaborations.

Looking down at the ground
for coins
when bills
fall from the sky.

You get home at Canada goose.
The NBC Nightly News comes on at house wren.
We have dinner between American robin and song sparrow.
A favorite TV program comes on at belted kingfisher.
You are usually asleep by half past tufted titmouse.
I often watch the news at Baltimore oriole.
If you have fallen asleep on the couch,
I try to get you up to go to bed at great horned owl.
I read or write through northern mockingbird, black-capped chickadee.
I go to bed sometime between northern cardinal and downy woodpecker.
You get up to get ready for work just past Canada goose.

Silent and proud it stood
surrounded by crabapple trees.
One hundred years watching
families in the field,
distant shouts of children
echoing over grass.
A broken front porch
where in the evening
two rockers rested weary bones.
Peeling wallpaper
through an upstairs bedroom window
told night stories
written in its folds.
Memories hang over a fallen roof,
shutters blown loose
marking the years of their lives.

Saddle blanket
drawn from a loom — weft and warp
her life, complex pattern,
wool snagged with burrs, and held dust as it crossed
cracked earth over Montana bluffs, grew damp and heavy
in the killing fields that took her son,
where she returned year after year to help heal —
wool that for 96 years protected and warmed,
as between horse’s saddle and curved back.
Later, softened and fragrant,
surrounds shoulders of friends and family,
driving out sorrow’s chill, angers’ storms.
Now folded and quiet,
red and gold, green and sky blue, still brilliant,
weave still tight.

The Reality of Rain

creates a dinner table of diaphanous
strings capable of holding a cornucopia
of sustenance, stored in silk cupboards,
a juicy fly, a powdery moth.
She hides at the edge of the web
in the daytime to avoid becoming
dinner herself for the birds,
who also grocery shop every day
Or she avoids predators by
appearing to be inedible
or unappetizing,
like Aunt Anne’s Oyster Dressing
birthed from her abdomen,
to set the table invitingly
for the next unwilling guest
that knocks on the door.

Shivering, disheveled and wet,
he hides
under an overturned
table behind the bankrupt
Sea Grill Restaurant,
surviving on cast-off
chicken wings
from a nearby pub.
Downtown Tacoma crowds
pass the orphaned puppy
to board a trolley.
He quivers at its jangle
and the clamor of cars
zooming off the freeway.
One drizzly day
a passing couple
spot the trembling
terrier. They pause.
Their gaze connects —
a decision made.

Remember this:
you are pure power,
sturdy and strong.
You are blooming,
because you carry within you
the most miraculous
blossoming of a body
surrounding a soul.
Isn’t it amazing,
how we can transform
to accommodate
such sustained surging
of substance and spirit?
You wait
patiently sharing your body,
swelling,
as she takes more
and more space,
her cells exploding,
expanding your bones and skin.
And you glow,
your face flushed,
and your body ballooning,
brimming with beauty.

Too Early, Too Late