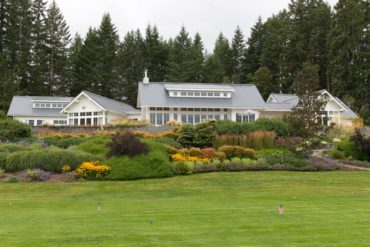 Norbert and Lisa van Dam of Seattle had historical ties to the South Sound when they bought their Grapeview property. Lisa remembers summers on Treasure Island when she was a girl, and later when their children enjoyed holidays and vacation adventures there. Both her brother’s and sister’s families still own property close by.

Eventually, they found the Olberg property with a home and a preschool on it. Clarence Olberg had lived in Bremerton and owned the Olberg Drug Store. He had bought the property in case Bremerton was bombed during World War II. Spoiler alert — it wasn’t — and he went on to own 31 Thrifty Drug Stores. 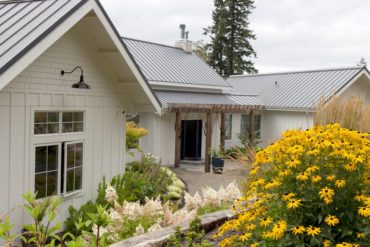 The old, vacant house flooded during a winter freeze before the van Dams bought the property in 1999. The damage to the building was fatal, so they donated it to the Grapeview Fire Department, which shared it with the sheriff’s SWAT. The old house got blown up and finally torched as training exercises. The couple have a funny photo of family and friends grinning in the foreground while the house burns to the ground behind them.

With the old house gone and with the aid of Len Williams, an architect out of Shelton, they staked their claim down by the water and built the “cabana,” a comfy home with a loft bedroom. Its metal roof, board-and-batten siding and strong lines would define the look of the future farmhouse. The finishes in the home are natural and textured, perfect for beach activities.

This sweet home gave the couple a base where they could enjoy the property even as they began the hard work of carving out bigger dreams. 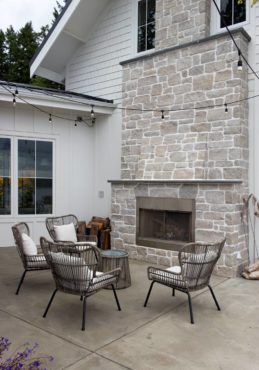 Today, the cabana can serve as a guest house or an entertainment center. When the attached boathouse is emptied of kayaks, paddle boards and life jackets, and the troops play at the beach, the cabana’s kitchen and bathroom keep the party from tromping up the hill to the big house. A firepit surrounded with driftwood that matches the color of the structure offers continuing fun on the beach late into the night. 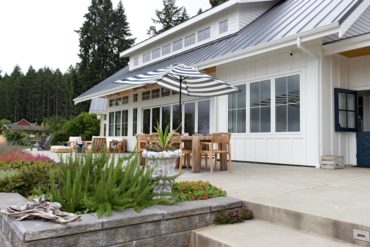 Between the water’s edge and the upper farmhouse, the usual Northwest culprits of blackberries and scotch broom had created a weedy mess. A friend helped Lisa van Dam with the garden design and work, but as the job went on — and on — she collaborated with Lyle Grant of Maple Leaf Design.

They terraced the land with berms and rock walls. Then they planted rugosa roses, Autumn Joy sedums and a variety of grasses in billowing masses. The garden contrasts with the strong, clean lines of the home, and its wandering path disguises the hill climb from the cabana. 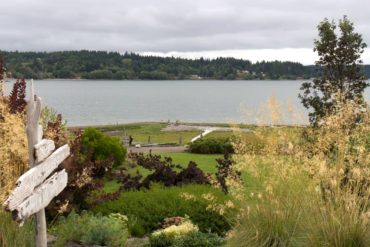 The van Dams returned to their architect, Williams, when it was time to build the farmhouse in 2015. The first contractor worked for 18 months without much progress, so the couple took on the contractor’s job and managed the project themselves. Endless phone calls, subcontractors, details, schedules and a fair share of their own work on the home kept them more than busy.

The home’s floor plan is an H-shape. Timber frames of fir bleached out to remove any redness hold the vaulted ceiling up on both ends of the common area. A stone fireplace with a solid wood mantle anchors the living room on one end, while a kitchen with a gutsy island and open shelving stands strong on the other. 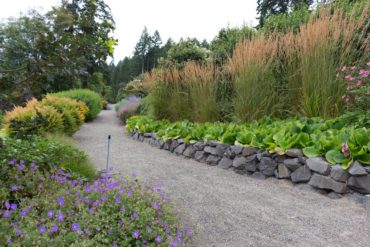 The dining room sits simple and proud, floating between the timber frames and taking great advantage of the east-facing window wall with clerestory windows. For all the light and volume of the interior space, the eye slides effortlessly down through the garden, across the beach and water to Mount Rainier straight ahead.

Long, lean passages along the west side overlook the sunken front garden. Horizontal lines of shiplap on the interior walls provide simplicity. The gallery glides by a wide window seat looking out at an exterior fireplace and across the patio to the serene view. Pools of light from large, almost industrial light fixtures lead to the bedroom wings. One wing is perpendicular to the center area, while the other sits at an angle. Both sides house a master suite, a bath and second bedroom. The suites face the water, open onto the extensive patio and have vaulted ceilings. The bathrooms are grounded with bold geometric tiles. And, surprise, none have double sinks. 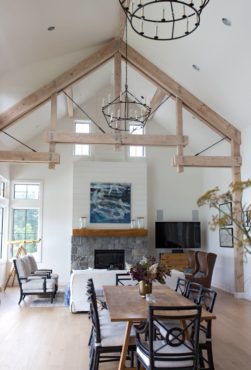 The ingredient that sets these interiors apart is a steady hand limiting colors and textures. Lisa van Dam attributes the restraint to her design team, who happen to be her two friends, Karen Painter and Katie Cooper Scorse. 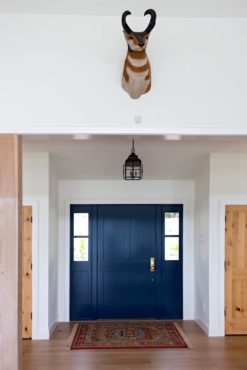 Scorse moved to the East Coast during the project but through the magic of Skype, she worked with van Dam and Painter to the end. They helped van Dam fine-tune her ideas and kept her on course when she would “think” she had found the perfect piece on Craigslist or in the family attic.

Instead, they worked together to find ever more sophisticated, subtle choices like the tables from Tirto Furniture in Seattle. Artisans took teak from antique benches and reconstructed them into the kitchen nook tables that can be joined to the dining table for expanded seating. The tables’ patina says farmhouse in a most authentic way. 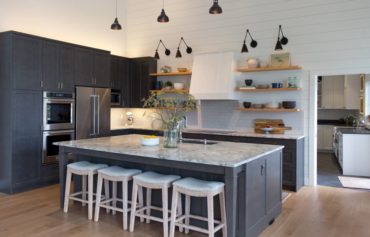 Restraint, repetition and gentle textures found in the timber frame, oak floors and the kitchen’s seashell-creamy granite offer serenity. Monochromatic colors and textures in paintings, matted art and even the bed linens concede to the force of nature just outside the windows: vibrant garden colors and textures, the sheen of water, the distant horizon, and the lift of sky and mountain. Visually, nothing competes with the dazzle of the landscape, and in the peaceful interior, everything is in its proper place. 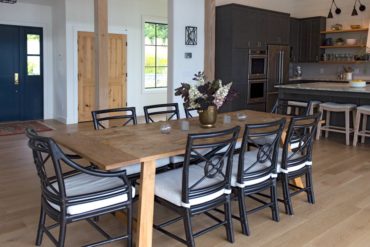 The butler’s pantry that sits behind the kitchen delights van Dam with its functionality. It makes staging and serving patio parties, formal or informal, seamless through the window that opens onto an exterior bar. Their son’s wedding dinner party on the patio pushed the limits of entertaining with 60 guests.

One friend brought her elderly mother, Lonnie Christianson, whose family ran a shoe store in Bremerton. She had visited the property many times in her youth. She remembers horseback riding and jitterbugging on a smaller patio, as well as another wedding party on this site where white tulips lined the paths. This enchanting image has taken root in van Dam, who plans on planting borders of the flowers soon. 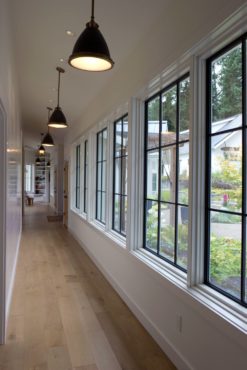 An exterior fireplace and conversation area tuck in between the main house and a bedroom wing. An expansive patio runs the length of the home for the sheer joy of their view. Both the home and the cabana have outdoor showers. 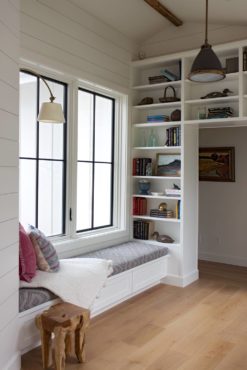 Nearby is a fenced vegetable garden. Higher on the slope is a separate garage with an unfinished loft. Over the garage doors and the front door to the home is a wooden arbor filled with leafy vines. In an unusual choice, the exterior trim is painted to match the house’s body color, a warm white. Paired with steep gable roofs finished in soft gray metal, the buildings enhance the garden, clouds and sky without interrupting them.

After years of organizing their life into weekend- and summer-sized projects, Norbert and Lisa van Dam are building memories with their family and friends. The home they created in their imagination and shaped with their hands stands as a solid reality on the hill.

Keats says, “A thing of beauty is a joy forever.” Beauty in this world enriches us all, and their home is beautiful.