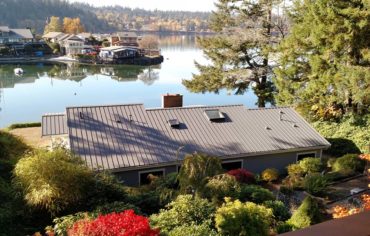 In contemplating retirement, Kevin and Cheri McCorkle considered options: buy a recreational vehicle and hit the road, maybe tackle more exotic travel or simply remodel their home of 15 years. They chose the remodel. Little did they know that they were embarking on a two-and-a-half-year trip in every sense of the word.

Retirement and relaxation had been as elusive as the mythical unicorn until they moved into their completed home 18 months ago. As they remember details of the remodel, their eyes glaze over and a bit of lost and wandering shows through. This remodel took them on a long and winding road into unknown territory.

Their dynamic water view deserved a remodel. It may be one of the most amazing water views in West Sound. It looks across the bay to homes on Madrona Point, with the Olympic Mountains rearing up massive and tall behind them. Their property juts out like a mini-peninsula commanding long sight-lines up Dyes Inlet and into Oyster Bay, while a shady shoreline full of native plantings softens the bright water.

Kevin McCorkle grew up on the waterfront and itched to get back to it. The couple wanted a place where they could kayak, water ski, enjoy boating and host casual parties on the water’s edge. A friend saw a for-sale sign from his boat in 2001 only a few houses up from the home McCorkle grew up in. So they checked it out, thus launching an extensive search over the summer. In the end, they came back to the home beach ‘hood and bought the property. 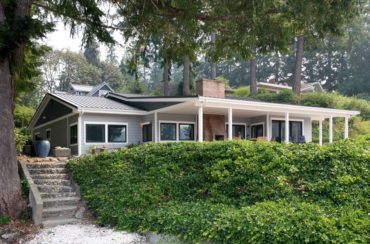 “It was the first house we saw — and the last,” Cheri McCorkle says.

Built in 1944, the 2,000-square-foot home with its small windows and a tiny kitchen gave barely a hint that it was on the water and had an exceptional view. But out the back door and down a few steps, there it was. Cheri and Kevin McCorkle enjoyed recreation on it as jobs allowed. Her background is in medical insurance at KPS Health Plans (which turned into Group Health Cooperative and then Kaiser Permanente Washington). He worked at PSNS/IMF, informally known as the Bremerton shipyard.

Before retiring and undertaking the big remodel, Kevin McCorkle built a stately four-car garage that houses his woodwork shop and a second-story office. It sits up-slope from the home, overlooking quite a view itself. Next, he remodeled the house’s entry, a guest room and an office with a wall of built-in cabinetry and shelves. Both projects began the transformation toward a classy, Northwest contemporary home.

Soon after they moved into the house, they talked to their architect friend, Carol Longmate Smiley, about a kitchen remodel. She suggested that they work out a plan for the entire house and use aging-in-place principles so the home would suit them well into retirement. 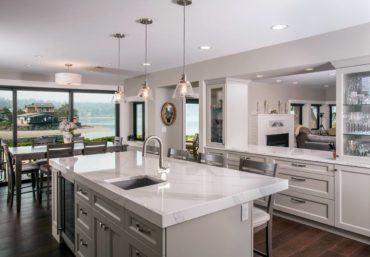 Building projects use blueprints like maps marking the final destination. They see you through the mire of swamps and beckon like the pot at the end of the rainbow. So with the confidence of plans in hand, the couple started their remodel in 2016.

This remodel excelled in surprising side trips — and some of them were not so good, the couple lamented. There were many crossroads where they celebrated their good fortune in having an excellent contractor, Michael Glading of Accurate Builders. 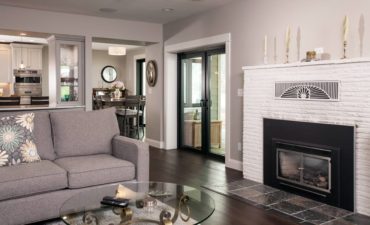 The home’s original construction used a straight-forward approach of a concrete slab with concrete block walls and a flat roof. Now the concrete slab stood as a monolithic roadblock. The plumbing that needed replacement was buried in concrete. (Seriously?) And to add to the distress, the slab wasn’t level. Fixing it required weeks of work. Furthermore, the exterior concrete blocks were crooked and took up more time-consuming work before siding could be installed. 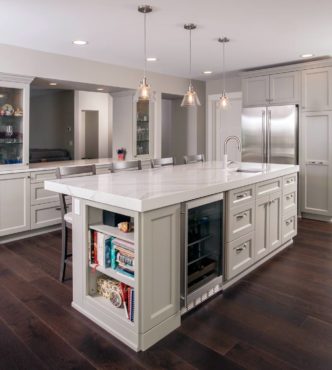 To fix the sagging ceiling, the roof was jacked up and beams were added to support a large, sliding glass door — so the couple could enjoy their extraordinary view. The roof extends into a covered patio, sheltering the home from too much sun and the McCorkles from mists and rain when they want coffee outside. 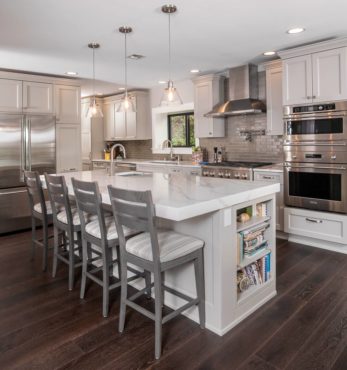 The extended eaves focus the eye on the dynamic water and mountain view, not allowing it to escape into empty sky. Horizontal lines inside echo the flow of the horizon and bring a sense of ease and calm, while corner windows in the living room and dining room draw the bay and inlet’s light into the interior.

Insulating the concrete blocks demanded special wall boards. Glading, their guide on this remodel expedition, took a side trip to find those exotic materials. Kevin McCorkle points out the beautiful trim work at doors that disguises the depth of the concrete block walls. Remodel issues rose and fell like the many sunrises and sunsets it took to complete this project. 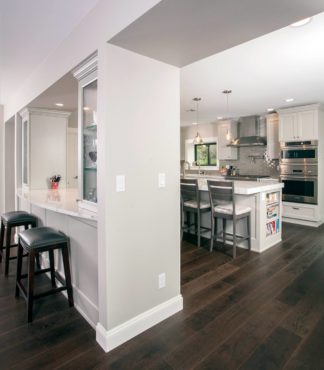 Life outside the remodel had challenges, too. Around the time the remodel began in earnest, the couple moved into Kevin McCorkle’s childhood home to care for his aging father. They both agree that they were lucky to have a place to live other than in the construction site. 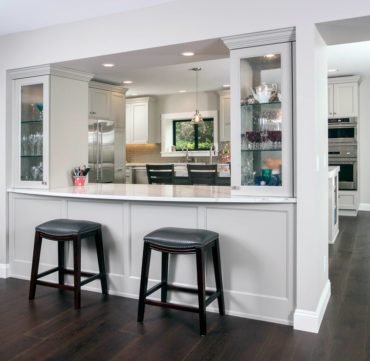 The McCorkles’ architect controlled the flowing space of the kitchen, dining area and living room in a way that nestles each area and maintains visibility among them without competing with the exterior view. A built-in, pass-through buffet between the living room and kitchen extends the entry. Glass cabinetry on either end breaks up the images of the two rooms like bits and pieces of a kaleidoscope, while the view is read in a sweeping glance. 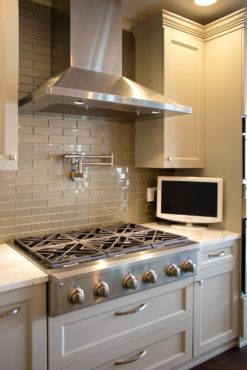 In the kitchen, the island’s comfortable chairs invite company to sit and chat or spread out the newspaper or a project. The television in the living room can be seen from the kitchen, too, guaranteeing that the cook can watch the show or join in conversations. 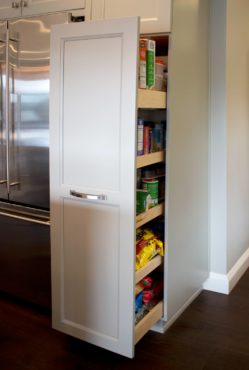 The storage in the kitchen and butler pantry lead to a happy surprise. Cheri McCorkle says it let them open up boxes originally sealed and stored in ’01. Rediscovering and living with their treasures feels like Christmas every day.

The kitchen is luminous. Gray, glass subway tiles climb the wall behind the stove. The countertops are quartz by Cambria, white with soft-gray swirls. The sink, a composite granite, is quiet. The microwave acts as a convection oven, also. Hot water is on-demand throughout the home. The raw umber of the oak floor gleams. Cheri laughs and says now she just needs to learn to cook. Sounds like another adventurous journey! 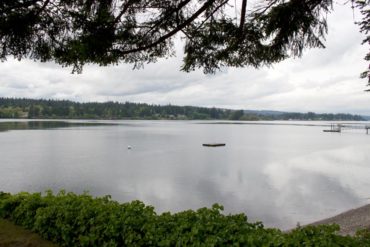 The original fireplace in the living room lends a snappy contrast of texture painted in its clean white. For the moment the mantle is painted, too, but a tiny, future remodel may change it out to a live-edge slab of wood to match the entry door’s warm oak. The large black television screen is barely noticeable because it repeats the black window frames. Those frames and the white of the woodwork create a crisp contrast with the mid-tone gray on the walls. This color scheme sings. 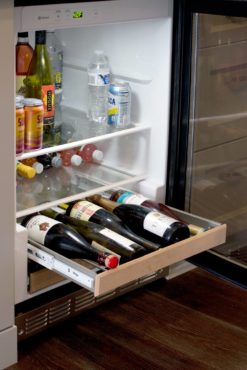 Beyond the living room lies the master bedroom, broken up into private nooks. A pocket door separates the waterfront bedroom from the more active areas of the closet, bathroom with a separate shower room and utility room.

The guest bathroom’s theme of bubbles foams up into unexpected fun. Round, glass tile accents the shower and round, rolling hardware components on the glass shower doors join in delightful play. A horizontal light fixture from Ikea adds a line of offset, various sized, circular lights set in chrome.

Even the best travels return someone to that most longed for place of all, a place called “home.” Kevin and Cheri McCorkle don’t miss their remodeling days. It’s time to leave that odyssey behind and sink into their home, relax in their enchanting views or take a paddle down the bay. It’s time to live in the wonder of their magical home.