The Makings of the ArtHouse 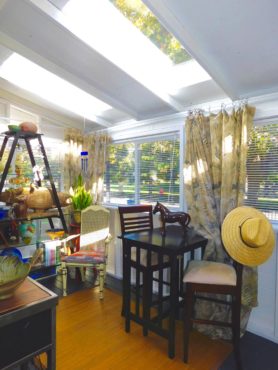 “Hoarding without guilt” could have been the heading, or “what to do with stuff.” Then add that subject to “an old house in Bremerton” and you’ve got a story —”stuff” and all.

Downsizing at its deepest when situations and complications create a drama of sorts — that includes history, art and the dynamics of Bremerton. I’m a fourth-generation Bremertonian who bought a 14,000-square-foot downtown building, opened an art gallery and 26 years later retired. On top of that, our three-story in-town house was no longer accommodating due to back problems. So a new journey began.

Bremerton housing reads like a James Michener novel — a long, drawn-out saga that encompasses the shady to the hero, World War II auxiliary dwelling units to shoreline whore houses and from presidential platforms to Navy barracks — no elaborate mansions, but a vast variety of small houses, like my Guatemalan grandmother’s house on 6th Street, where the Salvation Army is located now. 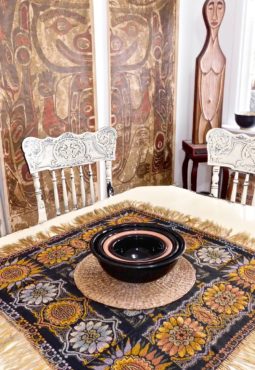 This story is about moving into a 1912 house on Park Avenue across from Evergreen Park that I bought some 15 years ago to be a rental.

Before I continue, I should mention that in the late ’70s, I lived in a house on Elizabeth Avenue, around the corner from that house, but never went to Evergreen Park. No one did back then. 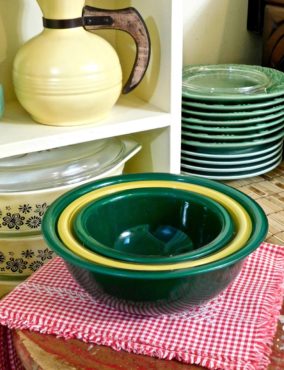 It was notoriously evil — overgrown and crime ridden. It was a dangerous place, and my dad, George Allen, was very worried.

Little did I know that decades later I would buy that little house around the corner, once owned by a woman named Ruth. I heard she was a feisty gal, with the city council anyway, always fighting for park solutions. Today she would delight in seeing a wonderful, thriving park.

In the late ’70s, she did some major remodeling, adding a large bedroom and raising the house to add a basement. After Ruth died, the house became lost in rental abuse — until me. 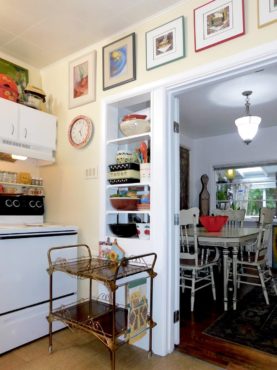 I fixed the basics, like fireplace, roof and general repair. After that, we rented it for 10 years until now.

Do you see the saga-trail? The remains of a 27-year-old art gallery business and an immense, private art collection that included large works from such acclaimed artists as Kwakiutl totem carver Tony Hunt and Northwest Coast artist John Hoover, and 30 other artists as well as my paintings — all or most going into a small, old house. Also included would be mementos like the watchmaker’s stool that belonged to Bremerton jeweler John Moeller, the long desk from the Friedlander jewelry store, shelves donated from the Naval Museum, chairs from the Bremerton Eagles and even a twin bed that was my first bed from a crib. 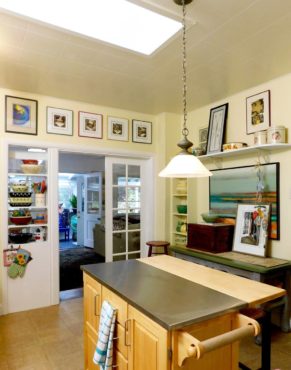 That Evergreen Park house became the target. It would be a major design endeavor that would be called the ArtHouse Project; “almost impossible,” most would think. Especially since I didn’t even mention the Pyrex collection from my 10-year Pyrex Museum that had grown to international fame. 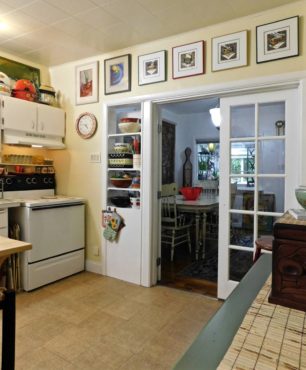 The ArtHouse’s main level is about 1,100 square feet, with a 700-square-foot basement/studio and a detached double garage. Interior decorating and design rules would have to be put in the closet. This was a new situation, different rules and an unusual use of space to exhibit, gather, retreat and paint.

Leaving the old was first on my mind. Ruth’s ’70s remodel cabinets were cheap to begin with, but they would stay, with the help of talented carpenter Ryan Wilson. The wood floors were stained and damaged but would not be refinished, and the white kitchen countertop would remain flawed and a bit tattered. The old Bremerton house would remain old. 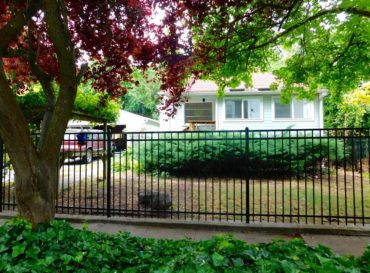 The double lot would get a new fence thanks to Custom Fencing, and Hernandez Landscaping would spruce up the yard. Jerry’s Duct Cleaning would take charge of the ducts and Hill Moving Services would help move us into the house. Juan Rodriguez moved most of our gallery work-studio into the double garage, so we could do and store art.

There was no need to fuss, for the old was to remain old and designing would not always abide accordingly, and much decorating would be against purist rules. Of course it would be a challenge, but the ArtHouse was a determined creature with its own ideas. 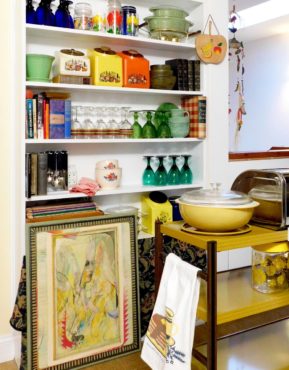 But even the ArtHouse was in for a shock. For example, the small dining and living room would accommodate over 30 art and pottery pieces, some on the floor against the wall, a Gary Hartman Northwest Coast wood design hanging partially over an original Tony Hunt block print mural, a Ken Lundemo salmon sculpture clambering for space on the fireplace mantle and a painted massive dining table sitting to one end as if to threaten all around it. 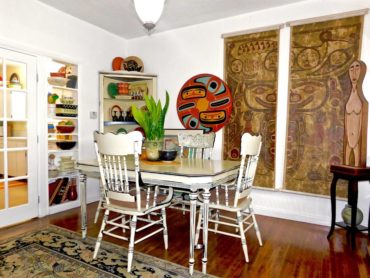 Then the stairwell, a showcase of opportunity. Huge pieces were hung: paintings by Joan Prater, Larry Parker and James Strickland; my paintings; a 7-foot, carved “Salmon Woman” by John Hoover; and Juan Rodriguez’s dimensional 6-foot paper person. There was no group theme.

Enter the kitchen, the central baby that ruled — there were over one hundred pieces of acclaimed Pyrex, much displayed above the old cabinets. The challenge was to exhibit without appearing to be a thrift shop, and mixing fine art with Pyrex — oh, the dilemma of it all.

Yes, the kitchen was centrally located, the social hub, a 12-foot by 15-foot room with diverse lighting that included a skylight and a window facing an abandoned, rundown, ivy-covered house that challenged one’s imagination. But the word “challenge” would soon take new meaning. 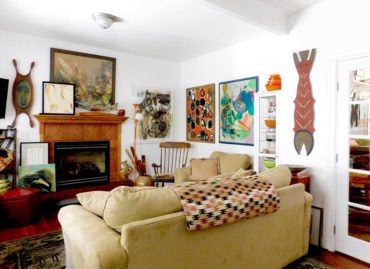 Maybe the challenge of my life, an old city house to accommodate art, Pyrex and Bremerton memorabilia, all facing Evergreen Park with its children at play, barbecue smells, high-tide boats seen in the distance and hundred-year-old trees to stand watch.

Reality threw me for a loop. Toward the end of the move and setup, there was more art than one big monster could swallow. In the bowels of the commercial Amy Burnett Building were paintings that were assumed long lost. They and other paintings were brought to the house or the new garage studio, and from there it was like a fine weaving, a desperate weaving, where threads mattered, but not all could be accommodated at once.

A different design project in a Navy town, across from a city waterfront park — an ArtHouse.