Beauty and the Beach 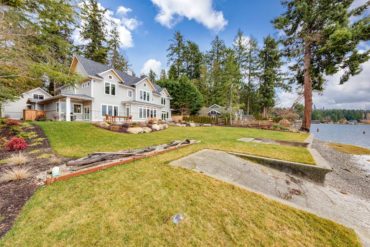 “Life is Short. Buy the Beach House,” says the sign in the kitchen. It’s a motto this family took to heart. Dan and Shannon* and their three daughters first discovered the joys of life by the water in Indianola, but the beach was rocky and Dan’s commute to the Bainbridge Island ferry was long. So the family began the search for a more suitable waterfront setting, and they found it in Lemolo, where the beaches are smooth and sandy and the Bainbridge boat is a relatively straight shot down Highway 305. 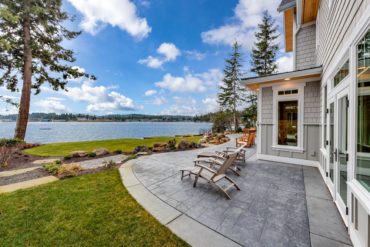 Lemolo, set just down the shore from Poulsbo and across Nesika Bay from Keyport, is a community in the midst of transitioning from beach bungalows to comfortable accommodations. Aside from the obvious draw of the magnificent water and mountain views, they had another reason to focus on Lemolo: The girls’ grandparents live along its sunny shore.

Providence smiled on the family when a lovely property with a 90-foot stretch of waterfront became available only a few houses away from the elder relatives. The uniquely south-facing view of the bay, Olympic Mountains and naval base Keyport was compelling. The beach was flat and sandy. There was a floating dock. It was perfect. 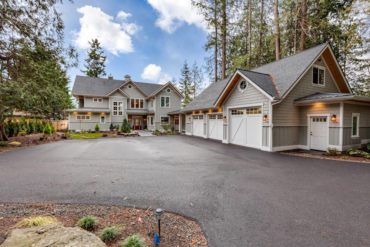 “We bought the property because it was the right place to raise our family,” Shannon explains. “It has a beach in the front and woods in the back.”

The property, owned since the early 1900s by one family, was the site of a very dated cabin. Unfortunately, the couple saw no way to save the old cottage. Once the deal was done, their first call was to father and son Jim and Justin Ingalls of Kitsap Trident Homes of Poulsbo to discuss a new house.

One year later, in 2016, they broke ground. Bainbridge Island architect Peter Manning drew a preliminary design for a Cape Cod-influenced two-story. As the project progressed, the couple turned to Justin Ingalls to tweak the design via CAD, opening the compartmentalized rooms and replacing the dark wood with white wainscoting and oak. The home would be a beauty. 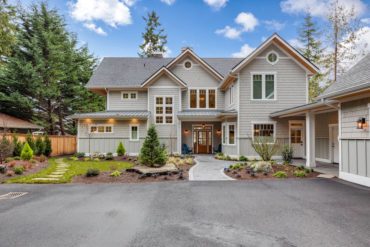 Once the work began, the homeowners faced a nearly constant stream of decisions.

“We were at the worksite at lot,” Shannon remembers. “There were so many details.”

Underneath it all, the couple knew what they wanted: a transitional East Coast style that captured as much light and view as possible. Ceilings would be high, 10 feet on the main floor and soaring to a grand 27 feet at the entry. They credit Kitsap Trident with handling all of the challenges with flexibility and skill. 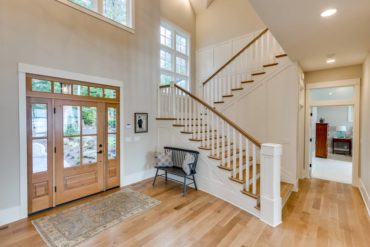 The next piece of the puzzle came serendipitously when the couple “won” a few hours with designer Wendy Phillips at an auction. Impressed with the Poulsbo designer’s work, they brought her in on the project. They credit Phillips with many of the home’s defining details, such as the tile, wainscoting and interior colors.

Phillips solved the problem of the huge, blank walls of the entry staircase with an elegant elevation of wainscoting. She and the homeowners agreed on a cohesive color palette of neutrals and pale blue-grays. Oak floors tie in with the oak entry door, stair treads and other oaken elements. 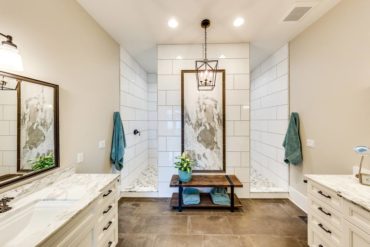 A Touch of Glamor

A big part of Phillips’ influence shows in three tiled bathrooms, especially the master bathroom, which is Shannon’s favorite. This is fortunate because the room is a much different one than she originally envisioned.

“Wendy brought us the idea and we said, ‘That’s too dramatic,'” she recalls, “but after a lot of thought, we agreed.”

The room that resulted is a showstopper of white marble with dark limestone flooring. Counters are white marble, as is the room’s centerpiece, a 5-foot-high marble panel set on the end wall and framed in limestone like the work of art it is. Behind this wall is a walk-through shower, which has a marble bathing bench, and white limestone and marble tile, including a beautifully crafted soap alcove. 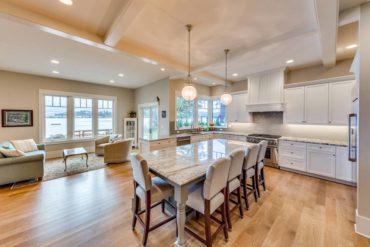 The family is impressed not only with Phillips’ vision but also with the skill of tile-setter Terry Hoppis, who brought his artistry to the Carrera marble and porcelain tile of the two additional second-floor bathrooms as well.

Three of the four bedrooms and a shared playroom/office overlook views that include the tip of Mount Rainier. When it came to the décor of the girls’ bedrooms, Shannon took a unique and brilliant approach. She had each girl choose a patterned bedspread, which acted as a template for the color and accessories of that girl’s room. In her second-floor view office, a custom maple desk is one of two pieces crafted by Poulsbo furniture maker Ben Dykstra. 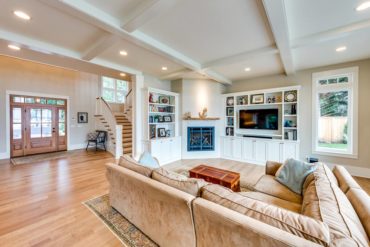 As with the rest of the house, the kitchen was designed for family. A large center island surrounded by tall, comfy chairs is a gathering point for parents and daughters each morning for breakfast. The gray-painted island sits in counterpoint to the white cabinets. The backsplash is of 2-by-10-inch glass subway tile. Fantasy-brown marble countertops tie it together. Light fixtures in this room and throughout the house were acquired from various sources, from eBay to Seattle Lighting. 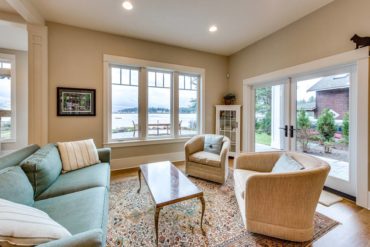 Of course, the inside is only part of the story. The couple chose the property specifically to give their girls a life of fresh air and sandy shoes. It’s a fine place to be an adult too: A flat, waterside lawn looks out to Brownsville, boat traffic and Keyport right across the bay.

To make the most of the grounds, the couple brought in Olmsted Landscaping to build a patio and install low plantings that won’t compete with the view. They were impressed with Olmsted’s expertise.

“They said, basically, ‘Give us a budget and get out of the way,'” Shannon says, laughing. “Olmsted came in with a vision. We went away for a weekend and when we got back, the job was almost done. They far exceeded our expectations.” 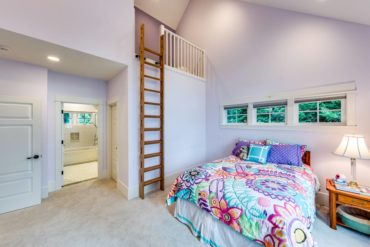 The family moved into their new home in July 2017. They spent that first summer getting settled in but the following year, the girls made up for it by spending a long, sunny summer playing games on the patio, swimming to the floating dock, paddle-boarding and searching for tiny crabs beneath the rocks.

Only a short walk down the beach, and they were visiting the grandparents. (“If we send them when the tide’s out, they can’t come back,” their mom says with a smile). Summer or winter, the days end with the stirring sound of taps from the base across the bay.

Wildlife makes occasional, dramatic appearances, such as a frolicking pair of river otters or the gray whale that breached right out front of the house. In early summer, two harbor seals — one after the other — gave birth to their pups on the dock. This place is everything the family could have wished, and they never tire of watching the world go by from their stately beauty by the beach.