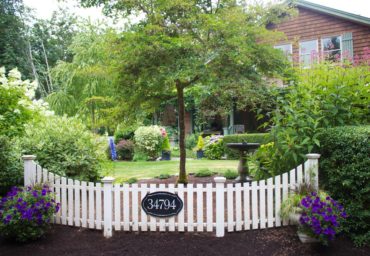 Hunter Thompson had a dream. In his imagination was the perfect house, one of space and light and comfort. His house would be timber-framed with the homespun understatement and straightforward lines of a domestic barn. It would incorporate the highest quality materials and systems. Above all, it would be a passion project, handmade by Thompson; his wife, Carol; and their family to be the couple’s forever home.

It was a bold undertaking for a man with no background whatsoever in construction. However, Thompson possesses a quality that makes up for lack of experience: perseverance. He also believes in a job done right. As an engineer, Thompson was prepared to approach the job with a methodical eye. He admits that he may have been a bit overoptimistic about the scope of the project going in.

“I thought, ‘I watch This Old House. We can do this,'” Thompson says with a laugh. “I had to learn fast.”

Fortunately, Carol knew where to go for help. The husband of a co-worker happened to be Mike Brown, president of FPH Construction of Bremerton. From start to finish, Brown took the role of project adviser to answer any questions the Thompsons had.

As with any new construction, the story begins with a piece of land. In 1997, when the hunt began, the Thompsons were eager to trade their existing water view for the peace and privacy of a secluded woodland. The new property would have to be large enough to retain a broad, forested buffer with space left over to satisfy Carol’s gift for gardening.

Thompson took the job seriously; he retired to devote himself entirely to the search. Several months and a hundred pieces of property later, he found the one, 7.2 acres in the wilds of Eglon. 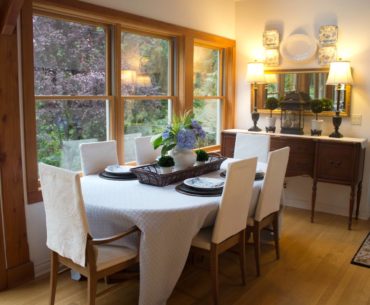 Now it was time for the work to begin. In July 1998, as soon as the homesite was cleared and the basement poured, the Thompsons parked their Airstream trailer on site and moved in. Living in an Airstream would be tight, but the couple figured they could rough it for a few months. After all, how long could it take to build a house?

“We thought it would take maybe six months,” Carol admits. “In fact, we lived in that Airstream for two years.”

For those two years, the house was Thompson’s full-time job. The couple took only enough time off for the occasional dinner out or weekend movie. Their four grown children were frequently there, working alongside their parents, installing the roof, putting up walls, placing timbers. The only jobs the family didn’t do themselves were the foundation, gutters and drywall. However, homemade by novices in no way meant shabby workmanship; Thompson is an admitted perfectionist with an ingrained ethic of excellence. 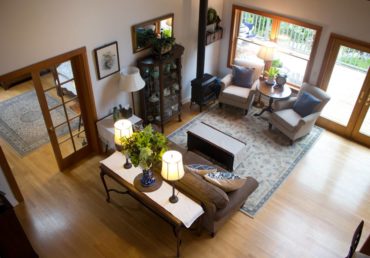 “You’re going to make mistakes,” he acknowledges. “That’s OK, but you don’t walk away. You fix the mistakes.”

True to his word, Thompson reworked when necessary. When one of the walls literally came up short, he tore it down and rebuilt it from the ground up. Some mistakes, such as irreplaceable timbers that the supplier cut to the wrong size, had to be rectified by tweaking the home’s design. 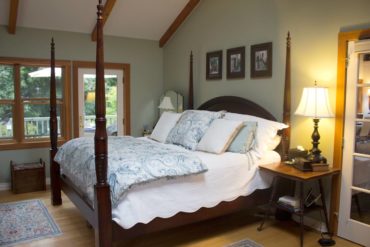 The Thompsons, enthusiastic hikers who enjoy America’s national parks, took the inspiration for their home in part from the great lodges of Yellowstone and Mount St. Helens. With that in mind, they chose handsome, reclaimed timbers as the heart of their home. Supportive as well as decorative, the post-and-beam construction is connected with traditional pegged, mortise-and-tenon joints. The reclaimed wood has a personality all its own. In a prior life, the great-room beam gained a bullet hole.

Every aspect of the structure is top-of-the-line. Walls are composed of structural insulated panels (SIPs). These foam-core panels are made to order and arrive numbered and ready to assemble. The effect, says Carol, is like a gigantic jigsaw puzzle. The Thompsons chose this innovative building system for its strength, energy efficiency and ease of installation. The family had the walls up in eight days. SIPs also gave the structure flexibility in case of earthquake. 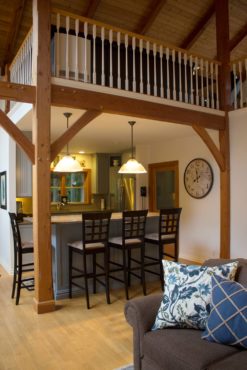 “The house is overbuilt,” Carol says proudly. “The county gave it their highest building rating. Hunter did a fabulous job.”

Her husband did not compromise. To bring an airy brightness to the home, he planned a two-story great room with as many windows as code would allow. Several rooms have skylights. He also brought in elements of warm wood: The ceiling is paneled in tongue-and-groove planks; the floor is quarter-sawn white oak. A large upstairs loft that often hosts sleepovers for grandchildren feels like a treehouse, owing to its view of the surrounding forest. The master bedroom has a similar aesthetic.

“It’s like sleeping in the woods,” Thompson says of the master’s leafy view.

Making the House a Home

As the house came together, Carol acted as the interior designer. Her natural affinity for décor resulted in public living areas painted in creamy white — accentuating the restful heartland ambiance. The kitchen — remodeled in 2015 — now holds beadboard cabinetry to the ceiling and elegant quartz countertops. She appreciates space-saving pocket doors and incorporated them throughout the house. 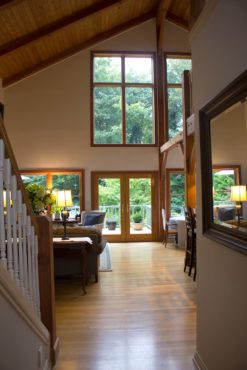 Vintage tables and solid-wood armoires look right at home with the timeless style. Carol frequented antique shops in Poulsbo and Silverdale for lovely examples of these, including a cherry cabinet in the water closet and a graceful sofa table that she refinished herself.

The most heartfelt of the pieces is the quarter-sawn English wardrobe of the master bedroom; after admiring it earlier in a local antique store, she returned to find it had been sold, only to discover later the purchaser was her husband. In main living areas, she prefers dark-wood furniture to contrast the warmer wood of the timbers, trim, ceiling and floors.

Carol also took the role of landscaper, a position she filled beautifully. In the backyard, a mix of shade-tolerant shrubs, perennials and grasses surrounds gravel paths and leads the way to an umbrella-shaded seating area with a fire pit. The front yard is defined by hedges of boxwood and osmanthus. A perennial border skirts a modest and manageable lawn. Draped along the front porch, a white-blooming wisteria is kept in polite containment by Thompson.

The result of the Thompsons’ hard work is a do-it-yourself coup in a setting where a trip down the drive is like a trip to a gentler time. Most importantly, it’s everything the family could have hoped for.

“I built my house to love my house,” Thompson notes.