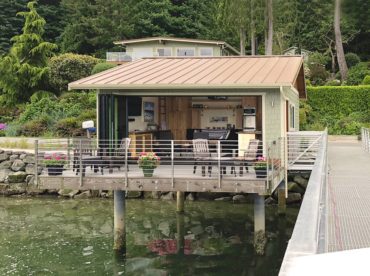 In the search for a new home, the owner found one that had a picturesque but deteriorating boathouse attached to a rickety pier. Who knows how much that influenced his purchase of the home, but that bit of history from the 1930s was of great interest to him. Twenty-four years later, after several phases of remodeling the home, the owner’s attention turned to dreams around the dilapidated shed and pier.

Executing his dream was an Olympian task that began with the arduous journey of acquiring permits. Rick Jones of Rick Jones Construction tells an epic tale about permitting that could compete with trying to land “the big one” in Moby Dick. One permit would have been harrowing but they needed two: one for the shed and one for the pier. 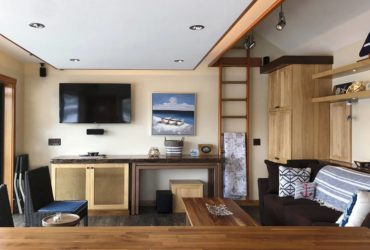 Ultimately, two permit professionals worked their way through four levels of jurisdictions that often had diametrically different requirements. One by one, details were defined and signed off by county, state and federal agencies, which included the Coast Guard, the Army Corps of Engineers and tribal authorities. Three years later — voila, permits!

What the owner wanted was an entertainment center on the water where friends could play cards or watch the Seahawks, the kids and grandkids could gather for games and parties — and where he could spend the night on the water. The pier, of course, was about easy access to his boat and the greater Sound beyond. And by the way, and needless to say, he’d need a wine cooler. 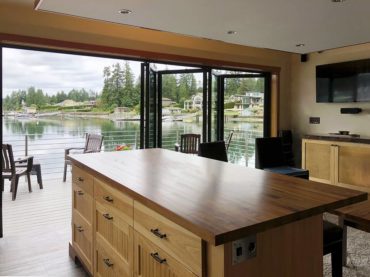 Once Jones knew through the permitting process that the boathouse would be 313 square feet and the roofline would follow the old shed, he was ready to roll. One of his first moves was to bring in Nancy Finneson, an interior designer with DeMane Design in Gig Harbor. Finneson says Jones is a clever contractor with some great ideas. She attends a yearly show for kitchen and bath designers and international builders, as does her cabinetmaker, Hyland Cabinetworks in Federal Way, so they are up-to-date on contemporary problem solving. 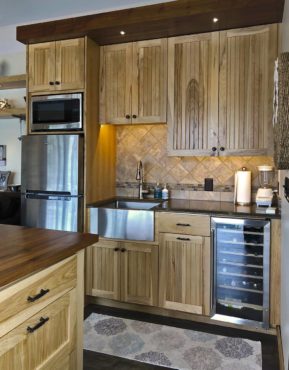 This came in handy as Finneson tackled the most demanding requirement of this small-scale project: the need for multifunctional capabilities. She designed numerous drafts of floor plans and layouts that the owner, contractor and she pored over (and over) until the goals of the project were refined. 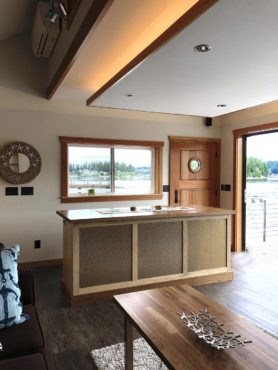 While Jones began the building, Finneson’s attention turned to designing cabinetry for a petite kitchen, large island, bridge shelving, closed storage and custom tables. A sophisticated, polished interior came together, piece by piece, where every component complements the others and fits together like a handcrafted jewelry box. The cabinetmaker found functional, unseen hardware that made the pieces work yet maintained a sleek and elegant style.

The large island has two genius features. It houses a hydraulic lift that raises it slightly so the casters mounted underneath can roll it around the room. Park it back under the window or even out onto the deck, depending on the size of the party and beauty of the weather. Furthermore, the cantilevered top can shift from one side of the island to the other to support the configuration needed when repositioned. 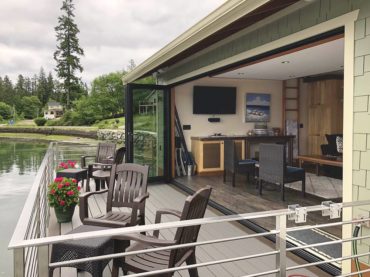 The television floats over a live-edge, cedar slab. Under it are two tables that fit together into an 8-foot table for grand feasting. The sofa turns into a sleeper and the large cabinet on the back wall stores linens and extra folding chairs. A slice from the live-edge cedar forms the lower shelf behind the sofa.

Subtle nautical touches, beginning with the compact size of the project itself, beautiful woods, brass and sparkling finishes accented with tiny spotlights, are reminiscent of classic wooden-boat interiors. The hickory cabinetry updates the look of slatted doors found in old yachts. A brass screen inset in the cabinet doors under the entertainment center and on the island brightens the boat theme. 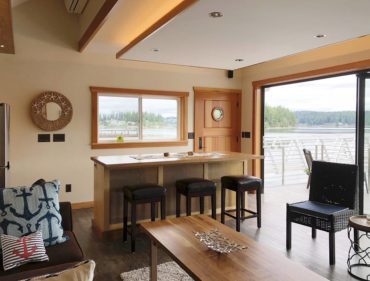 A custom ladder of wood and brass grants a proper boating touch while acting like a piece of art. The porthole window on the front door across the room adds another understated boat signature. The entire window wall opens with the touch of a finger.

Opened or closed, the boathouse feels like an alcove attached to the great outdoors. Minimal deck railings accentuate the unobstructed views and offer up the possibilities of the infinite horizon. But, frankly, who wants to move from this cozy, comfortable spot?

Opening this heavenly space upwardly is the ceiling’s floating “light cloud” where lighting is recessed. Jones found the idea in a magazine and used this architectural detail to connect the small space to the sky as the window wall connects it to the water. 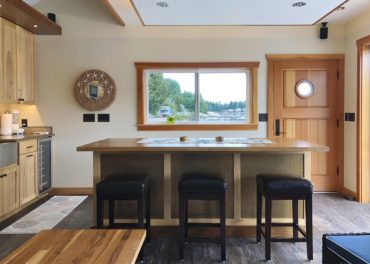 The lovely, art-ladder functionally accesses a storage area tucked under the roof’s peak. Electrical panels, transformers for 12-volt lighting, the exterior unit for the heat pump and general storage stow away up there. The metal roof and shake-shingle siding follow timeless coastal looks and are easily maintained.

Permits did not allow a bathroom, so one of the hidden features is a small boat toilet disguised as a wooden stool under the entertainment center. The rule is, though, if you use it, you carry it up the hill to the big house, which rather hilariously turns the house itself into the outhouse. Still, it’s comforting to know it’s there, right?

Finneson appreciated the amount of collaboration between the owner and the contractor, which brought out everyone’s best ideas. She thinks this could be another award-winning project.

Jones says once the permitting was done and the pilings were in place, the building itself was relatively easy. He found the fun in how receptive the owner was to their ideas.

The boathouse has been enjoyed for several years now. The owner and his family and friends are continually thrilled by the comfort and usability of this beautiful getaway.

Thanks to the extensive designing phase, no one is wishing they had done anything different. And isn’t that a dream come true?