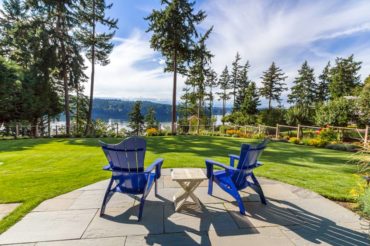 On the cover of Craig and Jen Dolezal’s wedding book is a quote by novelist Ivan Doig: “Life is wide. There’s room to take a new run at it.” These words to live by have layers of meaning for the couple, who came to the Pacific Northwest from Atlanta in 2013.

The first is love. The Dolezals’ marriage is a second-time-around for both partners. Then there’s the new locale. After a change in their careers made living anywhere in the country an option, they chose Bainbridge Island. The couple made the decision based on several factors, including a wish to move to the “left” coast close to Craig’s older sons in San Francisco and his sisters in Seattle. 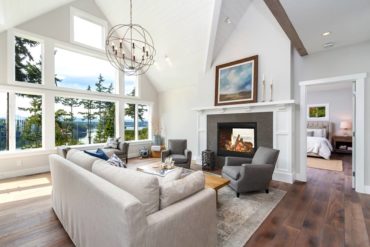 After searching from Vashon to Queen Anne, they found Bainbridge. The island met their requirements: It was outside yet close to the city and had salt-water views in every direction. Best of all, they found a house with the view they’d dreamed of and a price they could afford.

Which brought the Dolezals to the next layer of their wide life, a new living space.

The question is, if they knew then what they know now, would they again purchase the dated home with the dazzling view? Would they dare start a full-on, roof-raising remodel that gutted the structure and required the new incarnation be built within the footprint of the old? Well, maybe they’d have approached it differently. 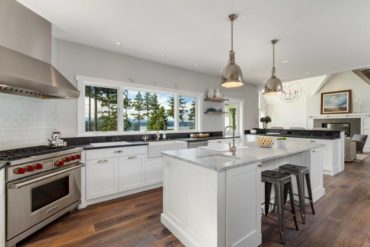 “Had we known better, we would have blown it up and started over,” Craig Dolezal says with a sigh.

Beauty and the Beast

The property by itself was a beauty. It had a large, level yard for the Dolezals’ two beloved golden retrievers, Charlie and Zoe. There was beach access, a challenging but doable 200 steps to the water. And the view was idyllic, looking west across Port Orchard Bay to Illahee and the Brownsville Marina, with the Olympic Mountains towering behind.

The house, however, had only one thing going for it. It had enough room for Craig’s three sons to visit. Other than that, the house was of 1989 vintage and looked every inch of it. 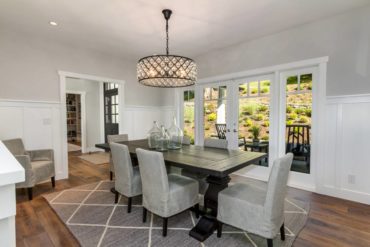 “It had barely been touched since it was built,” Jen Dolezal says. “It was a rental for two families: one upstairs and one in the basement. Its curb appeal was nonexistent.”

On the day the couple first saw it, the sun was glistening off the water and the mountains were out. They were tempted. Still, they hesitated. From their base in Atlanta, they saw other homes snapped up before they could make an offer, but the ugly duckling sat on the market. 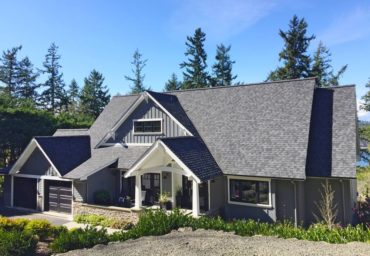 Finally, the house they were renting in Atlanta sold and they needed to make a decision. The ’80s-funky house would be fine, they decided. Give it some new paint, move the fireplace and open things up a bit. How hard could a little remodeling be?

“We’d never remodeled a house before,” Craig Dolezal confesses. “We were very naïve.”

The couple arrived at their new house in the pouring rain with only their two dogs and the few possessions they could fit in their TrailBlazer. At first, they lived in the house while planning the remodel.

“We essentially camped out in the house for six months,” Jen Dolezal recalls. “We made lots of trips to the hardware store for camping chairs, card tables and flashlights.”

As if a cross-country move to a new frontier and a complete house overhaul weren’t enough, the Dolezals — engaged for two years when they purchased the house — decided to raise the stakes even further. They would get married at their new home once the remodel was complete. They set a date for July 2015.

With no time to spare, they threw themselves into the project. The look would be calm-coastal Craftsman. Jen fleshed out the concept over hours online on Houzz and Pinterest boards. Her plan was built on serene neutrals: white, black, gray, chrome and glass. The finishes would have quality. There would be touches of Craftsman in the fireplace detail, beadboard wainscoting, subway wall tile, newel posts and honeycomb bathroom floor tile.

But pulling it all together was overwhelming. Especially with 80 wedding guests scheduled to show up in 18 months.

“Looking back, importance and urgency are a bad combo,” Craig muses.

“Especially on a budget,” adds Jen.

Then the couple found an ally in Bainbridge designer Kim McCall.

“Kim was our adviser. She was core to the project,” Jen Dolezal says. “Her opinions were good and she listened to what we wanted.”

As the project progressed, careful planning was punctuated by unforeseen architectural and design conundrums. These were handled on the fly by the Dolezals, McCall, architect Seri Yeckel and Fairbank Construction. A good example is the complicated interior ceiling angles of the living room, which the contractor solved beautifully.

The original “pinchy” entry was enlarged and two roof dormers were added to the upper floor, along with a new bathroom. As originally planned, the fireplace was ripped from its kitchen-hogging position and moved to the opposite wall, where a new double-sided model now serves both the living room and the ground-floor bedroom. The team completely reworked a dysfunctional area off the kitchen that the Dolezals had dubbed “the hall of doors” for its cluster of basement, bathroom, pantry and dining-room doors.

The liberated kitchen was now ready to take the stage. Jen Dolezal’s first requirement, a big window for the view, inspired the second: no upper cabinetry. A second, smaller window serves as a pass-through to the on-deck grill. Behind a rolling barn door, a working pantry stores everything that would otherwise clutter the countertops. Holding with the overall theme, she incorporated a touch of Craftsman with a white porcelain sink and a dash of coastal with a Dutch door to the deck. 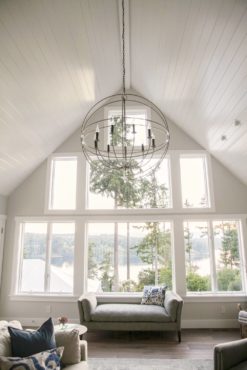 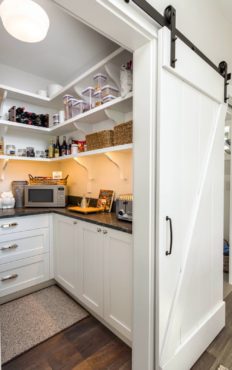 She and McCall then chose materials for the kitchen to underscore the seaside theme in a subliminal way. Black-honed granite with the look of wet beach rock covers the main counters. On the work island, white Carrera marble swirls with the subtlety of waves on a calm sea. Cabinet hardware is a mix of chrome bin pulls in the kitchen work areas and glass knobs reminiscent of beach glass on a nearby display cabinet.

Jen made numerous shopping trips, including to her favorite design showroom, Restoration Hardware in Seattle. Much of the eye-catching lighting in the home was obtained there, such as a dining room chandelier that glitters with dozens of solid-glass globes.

By April 2015 — 14 months after it began — the remodel was done. Not a moment too soon, considering the wedding was only three months away. There was still furnishing and decorating to do, and the couple needed to retrieve the rest of their possessions from Atlanta. The project skidded to a halt just in time for them to don a suit and wedding gown on a perfect July day.

The house and grounds rivaled any professional wedding venue. Craig’s sons nicknamed the house “the resort” for its elegance, comfort and the impossibly lovely view. But for the Dolezals, it’s just home, at long last.

The Dolezals credit many fine designers, contractors, craftsmen and businesses in the making of their home.