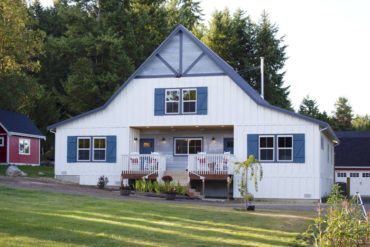 Simplicity has a timeless allure. Perhaps farmhouses derive their popularity from that simplicity that piques memories of a simpler time and place called home. But as Chris and Julie Anne Madson discovered, simplicity takes a serious commitment. They made choices, sat with them and then simplified them further over and over, again, throughout this experience.

Chris Madson points out that much decision-making happened in their 26-foot travel trailer, where the family lived for most of one year, and during the two days it took from land purchase to their move-in date. That’s impressive on several counts. Maybe the extreme togetherness sped the project along.

The farmhouse at Madson Meadows drew attention from its earliest stages, as cars slowed down to see what was growing in the center of a sloping 2-acre lot barely outside of Poulsbo. Now drivers stop to take photos of the creamy-white farmhouse with muted blue shutters, a metal roof and surprising accents of aged galvanized tin. They, too, may dream of a simpler life.

When the Madsons moved here from across the pond, they committed to a total simplification of their lives. Time spent commuting and in extraneous activities, like sports, were dropped in spite of having three sons ages 7, 10 and 12. Now that lost time is invested in home, family, friends and church, which are all within a 3-mile radius.

The Madsons give high praise to the contractor, designer and craftsmen who contributed to the success of their new nest. For instance, Janet Weber of Janet Weber Interior Design suggested the galvanized metal with its horizontal lines to both break up and enhance the vertical lines of the board-and-batten exterior.

Ron Thomas of Organic Edge Construction, who has a background in real estate, directed them in wise choices, beginning with the approach to the home. Chris Madson imagined a straight drive cut through the grassy pasture aiming directly at the house. Thomas suggested a different path.

Passing through a red farm-gate, a road borders the west fence-line and runs across the top of a gentle slope before curving down to the home. A magnificent madrona crowns the hill on one side of the drive while a row of firs guards the other and opens into a lush grass meadow, which provides rumble room for the three boys. Thomas’ advice resulted in massive curb appeal.

Another charming choice demands a second look. A gable-roofed shed and a two-story, gambrel-roofed garage that are painted barn-red with white trim peek out from around the creamy main house. The classic barn-red is there — but not where expected.

Out back stands a mature orchard of pear, apple and hazelnut trees. Madson comes from a line of farmers and knows how to nurture nature. He scored 35 maples, magnolias and flowering pears at a nursery sale, and the outlines of his veggie garden promise a summer harvest.

Two sets of stairs merge into a central one leading to the covered porch. The front door stands to the right and the back door to the left. Together they frame the kitchen’s southern windows, protected by the porch’s deep eave. It offers shade in summer but allows the low arc of the winter’s sun to direct light into the heart of the home.

The kitchen runs wide, with wing walls protecting it from entry traffic on both ends. A farm-style sink blends with contemporary quartz countertops. The backsplash looks like weathered barn wood, but surprise, its easy-care tile. Cabinetry and trim shine cheery white and the walls match the soothing, muted blue paint used throughout the home.

A large island invites multiple activities throughout the day: eating, homework, food prep, lounging around and talking. Its bowed edge softens the divide between kitchen and dining areas and falls just under the edge of the loft above.

The dining area lets the sophistication of simplicity sing its quiet song. The dark-gray timbers of the dining table are surrounded by two upholstered chairs at either end, two slatted chairs backed by the island and a wood-backed bench that matches the table on the living room side. One table, three styles of seating — that’s perfection, farm-style.

The dining room morphs into the living room with its two points of gathering. In the left corner, a sectional sofa forms a solid, comfy square. Across from it, a wood stove heats the home. There’s a heat-pump, but when Chris fires up the hearth each morning, Julie Anne and the boys naturally gather around it seeking heat and the pleasure of being together at the start of their day.

The ground-hugging furniture contrasts with the soaring, Douglas fir ceiling. The wood came from a Kitsap tree and local artisans milled and planed it. Its natural texture repeats in a massive beam that holds up the loft and forms the lower ceiling over the kitchen and island and a shiplap-wood entry wall. Laminate floor mimics rough-sawn wood with subdued grays and tans.

A gigantic lantern hangs above the quartz island. Mounted above the wooden beam, three red, goose-neck barn lights arch toward the dining table. Around the walls of the great room, up the stairs and around the loft are simple sconces that add a candlelight glow.

Julianne Madson thinks of the loft as a rustic cabin. Its open floor space allows boys to be boys. A casual sectional and table with benches for building Lego robotics are tucked along the walls. A lonely television, used less and less as the family finds the many ways of active fun on the farm, hides in the loft, too.

The boys share a bath with an unexpected trough sink outfitted with three watering stations. The two younger boys chose to share a room, so an old friend and local craftsman, Ben Dykstra, built them a natural-wood, Scandinavian-styled bunk bed. Even with full-size mattresses, it doesn’t budge, no matter how active the boys are.

The master bedroom overlooks the front pasture. A barn door slides open to reveal dual closets and a large bath. A contemporary, acrylic version of a claw-foot tub rules one corner. Two cabinets, painted soft aqua and topped with quartz sinks and oval mirrors, look like they came from — wait for it — a farmhouse. The floor is another delight. What looks like rough barnwood turns out to be suede-finished, radiant-heated tiles that are also used in the hardworking mud room.

Chris and Julia Anne Madson delight in the joy the home brings those who pass by and those who visit. People are excited by its differences and agree that they took a simple idea and pulled it off brilliantly. The Madsons would say they achieved it because of their team, who brought great ideas — but it’s also because the couple stayed the course of simplicity throughout a complex project.