Around the World and Home to Bainbridge

A world-traveling couple has made home their favorite destination
November 7, 2017 - Featured, The Home - Comments:
Text by Wendy Tweten Photography by Iklil Gregg 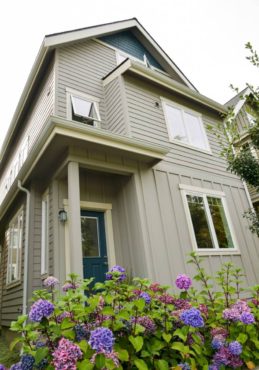 Been there, experienced that. When it comes to seeing the world, Lin Wyncoop and Kevin Compton of Bainbridge Island have built careers on it. Decades of flying with major international airlines, combined with a love of adventure, have taken the couple to all seven continents and countries from Argentina to Vietnam. Back home in the United States, they had always lived in sunny cities. First it was a Denver high-rise with a view of Pikes Peak. Next, a move to Arizona brought them to a big Scottsdale rambler with a backyard pool. 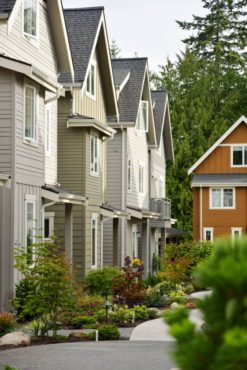 Then they discovered Western Washington. Occasional stopovers in Seattle convinced the couple that the fresh air and cool nights of the Puget Sound region were the antidote to the blast-furnace summers of the Sonoran Desert.

“In the back of our minds, we knew we’d move here eventually,” Compton says.

Finding a Piece of Heaven

In 2014, Compton and Wyncoop began their search for a home within commuting distance of SeaTac. Starting in King County, they spent their free time viewing houses. They checked online every day. One day, a new listing popped up at a place called Bainbridge Island. Island living sounded romantic, so they called their real estate agent. 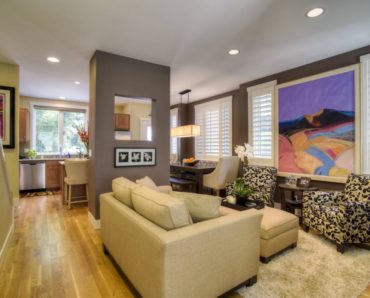 The next morning, when they drove off the ferry onto the island, it felt like they’d come home.

Their destination was a new townhouse, less than a mile from the Winslow ferry. It was the first home for sale in a pocket community by Ahn Quach. The home had an urban cottage ambiance spread over three levels. Its handsome details included a cable-rail stairway and gas fireplace.

The color scheme was unremittingly beige, but Wyncoop and Compton viewed it as a blank canvas awaiting personalization. When their agent called a few days later to tell them the price had been reduced, it sealed the deal.

“It was perfect,” Compton notes. “The island is so friendly, and it’s only a ferry ride away to one of the best cities in the world. And a townhouse frees us up to travel.” 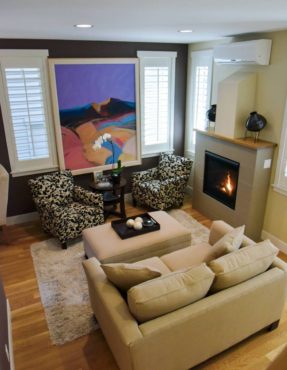 This past June, the couple illustrated this final point famously. On the spur of the moment, they grabbed a flight to London to see popular performer Adele. From their second-row seats, they watched what turned out to be Adele’s second-to-last show before announcing her retirement.

By the end of 2014, the pair had moved in, but there was a lot of work to do. At 1,330 square feet, the townhouse was half the size of their Scottsdale house, for which they soon found a buyer.

Fortunately, the new owner of the old house wanted all of the existing furnishings, so Wyncoop and Compton were able to start fresh. This was a good thing; the amount and scale of their old furniture simply wouldn’t fit in the new lodgings.

Compton, with an eye for design, took charge of the décor. The couple determined the look would be “ultra, ultra-contemporary.” The first consideration was the paint. The original beige gave way to gray and deep gray-browns just this side of black. They changed almost all the colors, except for the old-school white ceilings. 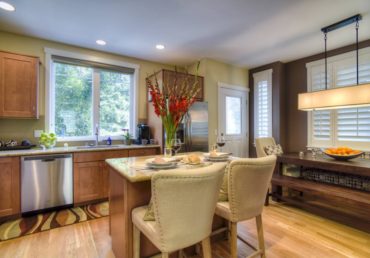 “We took our time to decide on the colors,” he explains. “We’d take as many as six different paint swatches and put them on a wall. After living with them for a week, we knew which one we wanted.”

The wall colors were also chosen to frame their collection of art. This eclectic array, gathered from around the world, brings shouts of color to rooms otherwise visually quiet.

In the kitchen, lithographs of bánh m” sandwiches and pho noodle soup were purchased in Hoi An, Vietnam. The Greek island of Mykonos is represented in the guest room. Wyncoop found the eight aboriginal paintings of the study in Melbourne. Closer to home, a favored waterscape is the work of Poulsbo artist Carrie Gotter.

Three big, bold pieces stand out. The first is a Peter Max enhanced Statue of Liberty lithograph, in which the artist hand-painted over his print. In the living room, one of the home’s two Downe Burns works takes center stage. In this piece, the Southwestern artist depicts a mountain scene in glowing colors.

The second Burns acrylic resides in an upstairs hallway. Titled “Cheyenne Crossing,” this striking rendering of a horse and rider in pink, blue, purple and red has a sister piece that hangs in the world headquarters of IBM.

Right at the start, Wyncoop and Compton planned a major change to their three-story townhome: They wanted the topmost floor to be the master suite. As designed, the second floor held two bedrooms, including what was meant as the master. The third floor was originally bonus loft space.

In 2016, architect Patrick Hungerford of Bainbridge Island took on the job of redesigning the top floor. When the blueprints were finished, the couple hired Green Door Construction to bring the design into being. It was a good working relationship.

“We were thrilled beyond anything with Scott Oberlander and Rob Gahley of Green Door,” Wyncoop says.

The main challenge was to add a bathroom to the roughly 400-square-foot loft space. It was mutually decided that the bathroom would take precedence of the area over the bedroom. The result is a cocoon of a sleeping quarters that opens to the real show-stopper, the en suite retreat.

“It’s my favorite part of the house,” Wyncoop says. “It’s like the best hotel.”

After six months of construction that required hauling everything up two flights of stairs, the master is now all that Compton and Wyncoop had hoped. Half of the bathroom is a dressing area, complete with long closets, cottage shutters on the window and a seating area beneath. The contractor added a four-star shower under the existing skylight. Frosted-glass closet doors hide much-needed storage and repeat the look of the entry’s frosted pocket door. 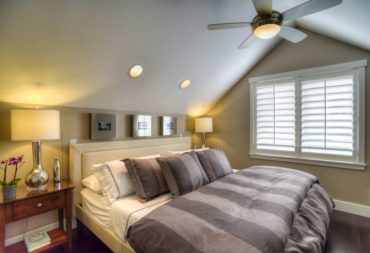 A Place for Everything

In the master suite, as in the rest of the house, storage was at a premium. To fill the need, little closets and cupboards were tucked in wherever they’re not obtrusive. Storage is tucked beneath the eaves and under a daybed. Benches open to secret cubbies. No space is wasted.

Space wasn’t the only savings. Compton challenged himself to comparison-shop online. He and Wyncoop also hunted for their look in-person at businesses such as Seattle Lighting, Room and Board at University Village and Home Depot.

Kevin Compton and Lin Wyncoop found a perfect fit in their streamlined townhouse. When the fog rolls in and the ferry horn begins to blast, it’s an invitation to roll over and pull the covers up higher. It’s enough to make even world travelers stay home once in a while.