The subject of product analysis is a slow page-turner, but mention grandma’s mixing bowls, and eyes widen. Today, mention Pyrex and eyes get even wider, as recent articles have stunned people with the announcement that old Pyrex is like gold. Yes, Pyrex has increased in value — but let’s talk.

I have seen enough old kitchen bowls to fill a tanker, and maybe just as many visitors who came and visited those bowls. I had an internationally recognized Pyrex Museum for 10 years, exhibiting almost 1,500 Pyrex bowls, carafes and casseroles. I considered it to be an art installation and performance piece, as I displayed, established an online page, wrote about, interviewed tourists and filmed and created over 50 half-hour cable shows for “Amy’s Pyrex People the Reality Show.”

Needless to say, when a national headline proclaimed that vintage Pyrex was selling for up to $1,800, I got called. Many wanted to know if it were true, whether I was still open, selling and being a gallery owner and artist — and how I got involved with the vintage Pyrex. 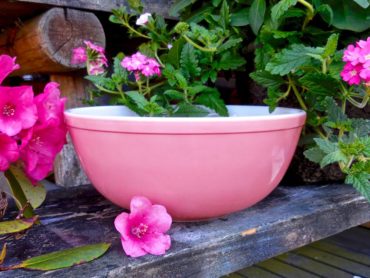 It began in 2004, when I bought a small, old building on Callow Avenue in Bremerton. It had been Moeller Jewelry Store for several generations and was filled with stuff from front to back and floor to ceiling, so much stuff that one could hardly see the highly prized, antique display units. Two were 14-foot-long jewelry cases with carved “Ms.” on the legs, not for “Moeller” but reportedly for “Marshal” out of Chicago.

There were two large, ornate safes and boxes of watch and jewelry parts everywhere and on every surface, along with kitchenware, knickknacks, you name it — the guy saved everything. We donated the watchmaker’s bench and tools to the Kitsap Historical Museum, which created a small Moeller Jewelry Store.

This would be my second art gallery but would include vintage items that would be displayed in the four huge antique display units. Enter Pyrex. 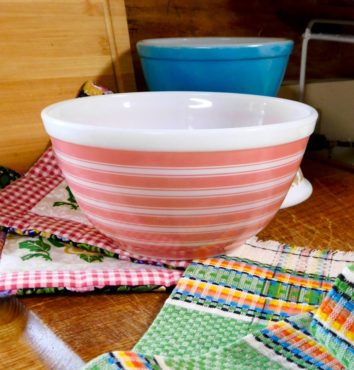 At this same time, I was representing local potters and would stage and sell their bowls with accessories like placemats, wine glasses, etc. This was another roll toward the kitchen subject. Then the real explosion happened when I announced to friends that I was looking for vintage Pyrex. Remember, 14 years ago, no one seemed to want old Pyrex. People who cleaned out cupboards were getting rid of that stuff — and hallelujah, thank you, they’d say. I happened to be closer than Goodwill or the landfill.

The Callow store was so cute, especially with Pyrex displayed in the antique cases, but something happened. People were buying the Pyrex bowls and casseroles, pieces I really did not want to sell. A friend said, “Make a sign saying Pyrex Museum.”

The sign, made for the few dozen Pyrex pieces, said, “Pyrex Museum for your viewing pleasure.” In no time, the few dozen became a few hundred, then 1,500 and with a shop of their own as we moved the Pyrex Museum next to the Amy Burnett Art Gallery in downtown Bremerton. 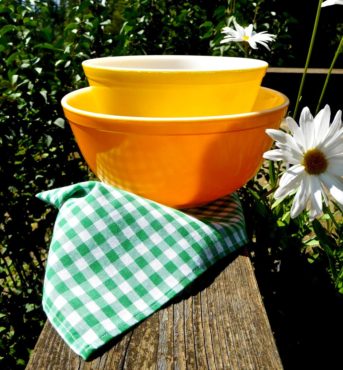 Being a ferry ride from Seattle and a few blocks from the terminal, the Pyrex Museum was quite a hit, especially having been announced in the Washington State Tourism Register. Soon, most Northwest media were aware of and covering the quirky museum. Thousands and thousands of visitors were amazed with the floor-to-ceiling presentation of “grandma’s kitchen,” and many of those visitors had stories to share.

I filmed Pyrex and the museum visitors and most of the shows aired on local cable TV. Reviewing the films today, I have fun noticing commonalities, like many visitors saying, “I feel old. I still use these bowls and casseroles,” and I would smile and say, “We all do.”

It brings to mind product popularity and product sustainability. Pyrex was one of the most highly produced brands in U.S. history. It began in 1915, when the famous opal series, meaning white inside, was introduced. It reigned from 1945 to 1986 and was the makeup of my Pyrex project.

Gallery visitors shared so many stories, from Corning teapots used as urns to personal memories of Andy Warhol by a New York gal picking up our Campbell soup can. 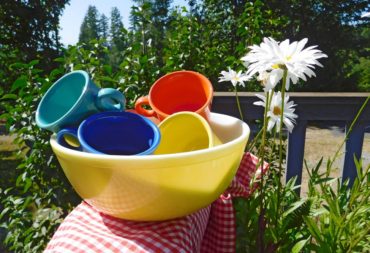 Then there was the day when the store was filled with tourists and a young man told a captivating story. “Every Saturday, my family made popcorn in a big, yellow Pyrex bowl, until it broke and Dad threw the pieces in the trash,” the fellow said. “Later, I smashed down the trash in the can, which was my job, and cut my wrist on the Pyrex shards and was taken to emergency for stitches. Next day, I was surprised that the police came to my high school. The hospital suspected I’d tried to commit suicide. Suicide by Pyrex — the family still teases me.”

I remember another day when a guy walked in, looked around and distinctly said, “I hate Pyrex.” “The worst day of my life,” he explained. “My wife left me and the kids, and for our first meal, I made a casserole that blew up in the oven.” 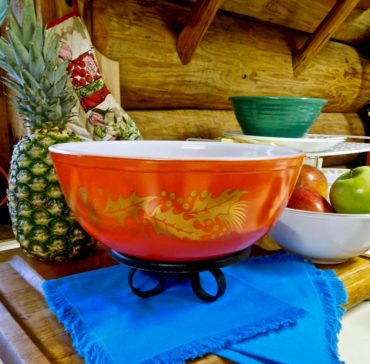 The Pyrex Museum was like a bridge, connecting the past with the present. Something as simple as a mixing bowl could evoke memories beyond my imagination. I would always encourage participation — handing folks a vintage dish they recognized or asking kids what food they imagined in a particular bowl.

In 1945, Pyrex presented a mixing-bowl set of primary colors, and literally, most families had that set. Lots of Pyrex was featured at the museum, but probably the most recognized today is a series called “Spring Blossom” that was produced from 1972 until 1979. It was a fashionable, olive-avocado green with distinct white flowers.

One day, a reporter for the Washington State CEO Magazine, on his way to the ferry, popped in. He was doing an in-depth article on Bremerton. He asked if a photographer could come in the next day to take pictures. I said, “Sure.”

Grandma’s kitchen Pyrex bowls, a topic bigger than Mount Everest. I was amazed daily, even interviewed for a Wall Street Journal article on the subject. They didn’t use my Pyrex-words-of-wisdom, but just the fact that I was interviewed …

Stumbling into a 14-year Pyrex project was beyond my wildest imagination. Calling Pyrex “art” can be very debatable, but we call Grandma’s kitchen bowls art — and many would agree.