A New Day for a Century-Old Cabin 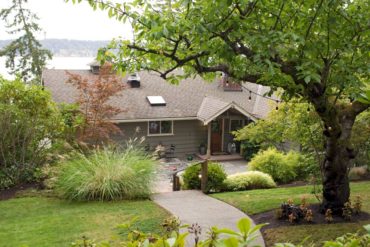 In 1920, fishermen dangling a line along the shoreline between Poulsbo and Agate Pass may have noticed a neat little beach cabin standing alone in the quiet shelter of Lemolo’s Brauer Cove. The tiny dwelling was standard for its day, little more than a room served by an outhouse.

A classic Puget Sound summer cottage, it was built for lazy days of beachcombing and clam digging, and nights by the fire pit — not for extended indoor stays. Cozy, yes. Comfortable? Only for as long as the air stayed warm and the ground dry.

My, how things change. Nearly a hundred years later, the cove is ringed with graceful homes and the native scrub has been replaced by manicured landscaping. Yet in the middle of it all, the old cabin still stands. Now, however, it’s part of a grander whole. At the heart of the much-loved Kimmel family home, it’s the center of a 3,300-square-foot house with one of the best views in the county.

Scott and Joni Kimmel and their children, Jackson and Ellie, made the home their own in the summer of 2005, acquiring it from Dave and Renee Gustafson. The Gustafsons were only the second family to own the sweet little waterfront retreat.

During their many years in residence, the Gustafsons made major upgrades and raised their children by the shore of Brauer Cove. In a neat circle of coincidence, one of these children would grow up to be the wife of a co-worker at Joni Kimmel’s office, Windermere Real Estate in Poulsbo. 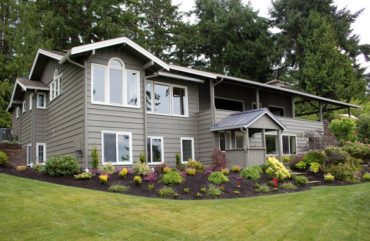 As for Scott and Joni Kimmel, they both grew up in Poulsbo and fell in love with Brauer Cove. In fact, Scott spent youthful hours swimming in the spring-fed pond at the very house he and his wife now own. As the years passed and he grew up and built his business, seafood wholesaler New Day Fisheries of Port Townsend, the couple never lost their interest in the cove. So, when the Gustafson property came to market, the Kimmels didn’t hesitate, even though a move meant selling the home they’d had custom-built just two years earlier.

“This was where we belonged,” Joni Kimmel says.

“I could live in a tent on this property,” her husband agrees, adding with a smile, “but it’s even better with a house on it.”

Joni Kimmel credits the Gustafsons with good choices in turning the modest shelter into a year-round residence. The living space was expanded. Windows were added. Walls and ceiling were covered in driftwood-pale pickled pine.

“Everything they did was superthoughtful,” she says. “They did really smart things.”

Kimmel admired the house’s coastal-living look and continued it, decorating her new home herself with help from Judy Gates, whom Kimmel calls “the resource queen.” 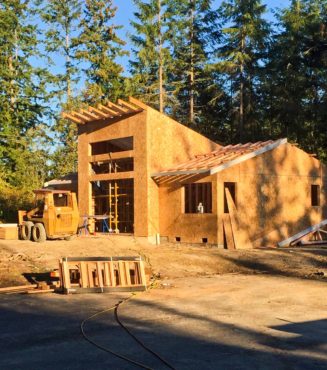 “If you want a particular finish or fixture, she’ll find it,” she says.

Together, the two women put their fine sense of fashion to work to “beach up” the home with a red-and-white main living area, and crisp-blue and white in the guest room and downstairs family room.

Kimmel’s daughter, Ellie, enjoys a basement bedroom with a perfect view of the cove and tropical turquoise walls that reflect the light. The women removed three layers of wallpaper in the powder room and changed the pink wainscoting to white. Trim throughout was painted white and an original red brick wall was whitewashed.

A downstairs bathroom was stripped of Mexican tile and beach-pail wallpaper and finished with clean-white wainscot and a blue tile floor. Kimmel and Gates collected many of the materials and décor locally, including in Poulsbo and Port Gamble. 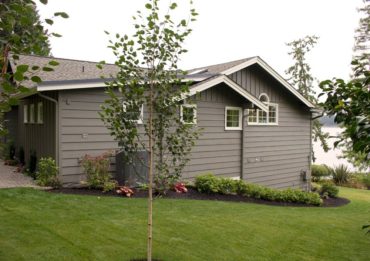 One element Kimmel never lost sight of was the provenance of the home. Although the house must be modern and comfortable, with everything focused on Puget Sound and mountain views, the home is — at heart — a piece of Poulsbo’s past. With this in mind, she retained reminders of the 1920s, such as an original stained-glass window, reproduction crystal doorknobs and an ancient beachside fireplace, now restored.

“It’s hard to remodel a home of this era without combining old and new,” Kimmel says. 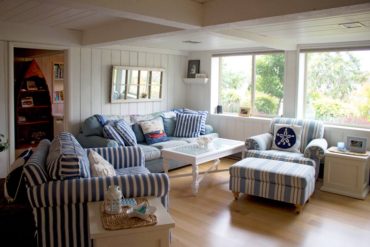 One thing that would change was the lattice-enclosed kayak storage under the master bedroom. Rather than simply fashioning the existing space into a crude room, the couple contracted with Gates’ husband, Joe, of Joe Gates Construction, to carve out the space properly, jacking up the house, digging directly beneath the foundation and installing I-beams. By the time the work was done, an enormous stump left in place and built over by former owners had been removed and the excavation was big enough to drive a car through. 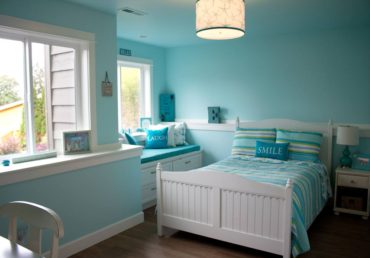 The new square footage became part of a fully finished daylight basement. A major piece of the downstairs level for the football-loving Kimmels is a theater, known by the family as the Seahawk room. With three walls of smooth concrete, the game is projected directly onto the wall.

In January 2016, the Kimmels embarked on the latest stage of their home’s transformation: the master suite. Built as an addition in 1986, the bedroom and attached bath were long overdue for a facelift. Kimmel chose a laid-back, casually beautiful style with neutral tones and heated tile floors that have the look of wood. To bring the view to the bathroom as well as the bedroom, the Kimmels used an oversized mirror along the bathroom’s back wall and left an archway between the two rooms so wide, it required a barn door. 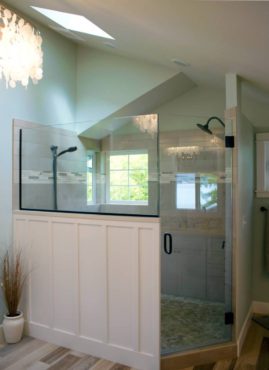 The Kimmel home is about more than a lovely house and world-class view; it’s also about enjoying the outdoors. A view deck of 1,100 square feet surrounds the upper story. Below that, the front yard is a landscape worthy of a wedding venue. In fact, the couple hope that one day, one of their children will make use of the yard for that very purpose.

The view-friendly landscape, complete with stream and pond, was designed and installed by Sean Olmsted. Equally noteworthy is the hardscape of flagstone and stamped concrete.

The final touch of the Kimmels’ open-air hangout is the family’s private dock and boathouse. The dock holds smaller craft such as kayaks and the runabout that serves as the gateway to the boathouse. The boathouse houses a ski boat that provides the Kimmels and their friends summer adventures on water skis, inner tubes, wake boards and anything else that can be towed behind a boat.

For all the refinements of the Kimmels’ home, it’s all about family and friendship. The home has stood the test of time and now awaits the future as their forever home.

“It’s been 11 years of loving every moment,” Kimmel says. “We’re so glad we didn’t let the place slip through our fingers.”