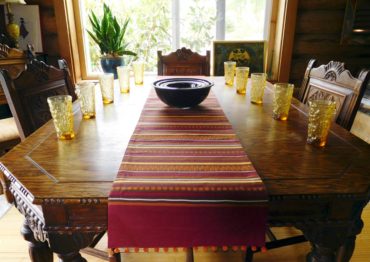 Table runners — what an unexpected journey.

In our wildest dreams of dreams, there are things we never think of, not in a million years. The most commonly overlooked items are often those we see every day yet never really notice, or those we keep even though they are obsolete — like well-warn oven mitts or grandma’s useless sewing thimbles, moved aside but never removed from the junk drawer.

These cooking and dinnerware items were passed down from mom or grandma, but often put aside to be forgotten. Maybe not really forgotten, but waiting — just waiting for an appropriate use, which may never happen. 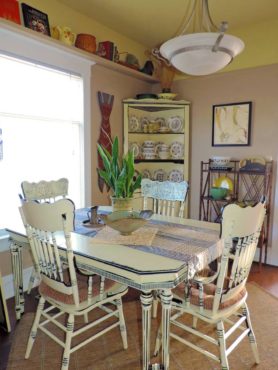 Table runners may fit in this category of being obsolete — if it weren’t for the holidays, when most homes display those festive theme runners, soon to be folded and put aside until the next year.

Table runners are the subject — those long things seen on formal dining tables. For those millennium techies out there, living in trendy minimalist, industrial-flare apartments and condos, I may need to explain just what is a formal dining table. Of course, that is a joke. Or not.

Because the kitchen/dining trend is so different these days, I wanted to start this table-runner project by talking to a professional interior designer. I contacted Jennifer McLinko, owner of Mise en Place Design located in Bremerton.

“Table runners are not a big design factor like they use to be, unless it’s a special occasion or party,” she said. “Table runners in the past were for more formal settings and as a way to show off what one had, but nowadays, people are more inclined to keep things simple and casual, focusing more on the food and company.” 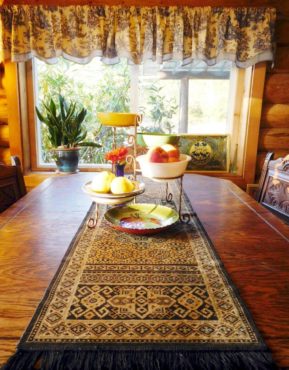 I like to write about, research and interview folks on kitchen and dining room products that were made in the United States before the North American Free Trade Agreement and China seemed to take a hold of the market. These traditionally made in the United States drinking glasses, dishes, cookware, utensils and napkin rings were just a few of the article subjects — items now flooding thrift shops or discarded as rummage.

Table runners are like wild creatures wanting attention in a forest of creature notables. In other words, a table runner is neither here nor there. It is not unwanted. It has its place. We recognize it, and often see those things at holiday time. Otherwise, table runners are getting to be a little mysterious.

So simple to explain a table runner: long and narrow. Right?

Let’s go a little further. First, the word “runner” implies “long.” Can you imagine a runner on a card table or tall café table — no, obviously silly. 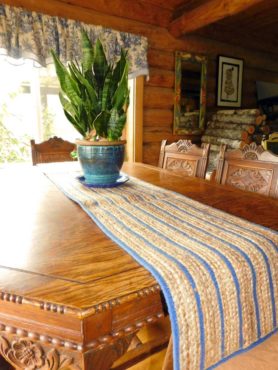 Some think a tablecloth is the same as table runner. No, a tablecloth is a protector with the intent of “use,” while a table runner still allows the table to be seen, with intended use possibly implied. A standard runner size would be 16 by 80 inches.

Luckily, having a retail gallery in Bremerton, I was in a position to talk to a lot of people about table runners. At first I was hesitant, for the topic is not a usual forum for any type of discussion.

Was I surprised! First approach was at a farmers market. I bought breakfast and sat at a table with several nice women whom I did not know. When I brought up the topic of table runners, excitement exploded.

I couldn’t believe the enthusiasm as stories ensued. Stories of grandmothers’ crocheted table runner almost brought tears, but it was a catalyst for even more stories.

Then I brought a dozen or more table runners to the gallery, soon realizing that the stories would be endless, like igniting a fire. 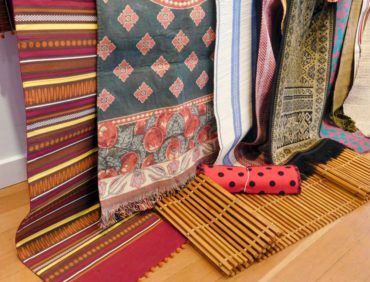 One gal visiting the art gallery created an audience as she told the story of her antique table that expanded to eternity, and table runners were applied sidewise rather than lengthwise.

Most table runner stories were about seasonal applications pertaining to large family dinners. But many stories were also about centerpieces, like an elegant floral arrangement, where an expensive table needed protection from moisture.

Story after story, and timelines were crossed, as even trendy midcentury, modern had its Kline-type patterned table runners. One fellow in particular was really excited to see all of the strung-out table runners in the gallery, but he seemed quite puzzled, until I told him what I was doing. 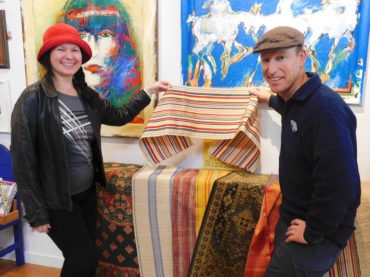 His story was unique and he had ample storytelling time, since his wife was next door at the fabric store. Not long ago, he helped his wife create a table runner, he explained, while moving his hands in the air as to form different shapes.

Even visiting tourists paused to hear the story from a professed scientist whose table runner design had scientific meaning.

Table runners may be obsolete to some, but why so many? On my search, I explored thrift shops and recognized chain stores like Macy’s or JCPenney, and no one was lacking table runners. They are everywhere.

Some told me of using long neck scarves, others enjoyed using runs of bolt fabric. One store had a rope-latched, 16-by-80-inch runner, which I bought. I handed it to the checkout gal saying, “Packaging says table runner, but this will make a good carpet hall runner.” She agreed.

A lot of table runners, new or old, but I suspect a majority of them are folded, tucked away, and may or may not be used ever again.