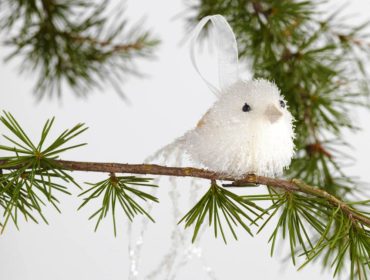 Birds have been a part of holiday celebrations and traditions for hundreds of years. Their place in the festivities continues to grow.

During dark Scandinavian and Northern European winters, Christmas celebrations brightened the days and lifted spirits. A large part of the activities revolved around the preparation of special foods. Tables groaned under the weight of favorite, seasonal dishes.

Even the birds shared in the spirit of plenty. For decades, when the ground was covered with snow, sheaves of grain were made into bundles that could be fastened on posts and set out for hungry winter birds.

Other holiday traditions were of a celebratory nature, with singing and dancing. A reading or singing of the “Twelve Days of Christmas” included subjects like “eleven lords a-leaping” and “nine ladies waiting.” Half of the “true loves’ gifts,” however, were birds.

The rhyme was written in the latter part of the 18th century and has gone through various versions. They begin with “a partridge in a pear tree,” and continue with “two turtle doves, three French hens, four calling (or colly) birds, six geese a-laying and seven swans a-swimming.” It wouldn’t take too much effort to create a similar work titled “Twelve Birds of Christmas.” The cardinal would have to be one of the subjects.

Christmas cards and Christmas tree ornaments have been part of the holiday season for many years. Certain birds are the stars of the season. The cardinal isn’t a bird seen in the West Sound area but everyone is familiar with this beautiful, red bird. When placed in a snow-covered Christmas scene, it makes a popular Christmas card subject. 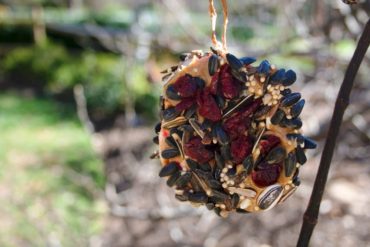 Another familiar subject seen on today’s cards is a white dove. It’s a symbol of peace throughout the world. As the popularity of birds as subjects on holiday cards has grown, the variety of birds chosen as illustrations has also grown.

Chickadees are used on many cards but the species chosen the most is the black-capped chickadee. This is due to the fact that this little bird is seen over almost all of the country. Our chestnut-backed chickadee is a Northwest native and while it does show up on cards, wrapping paper and ornaments, the black-capped remains in first place.

Some bird species are used more than they once were. That is due, in part, to organizations like the National Audubon Society and the National Wildlife Federation. Both of these outdoor-oriented groups publish catalogs that carry Christmas cards and calendars, in addition to many outdoor gift items. The cards and calendars show birds like the house finch, golden-crowned kinglet, evening grosbeak and white-breasted nuthatch, as well as birds that once were almost unknown in the card industry.

Ornaments for holiday trees come in an endless variety of shapes, sizes and creative art focusing on birds. They can be purchased year round and are a popular souvenir for travelers. These ornaments from distant places become part of the annual decorating of the tree.

More and more, they are used to decorate “bird trees.” Every ornament on the tree is a bird or something connected with it. Tiny feeders and miniature birdbaths even become part of the “bird scene.”

There is another way to create a bird tree and it, too, is growing in popularity. Winter is the time of the year when the activity around bird feeders is the greatest. When a decorated tree is added to the yard’s collection of feeders, it is soon accepted by the birds.

The decorations — most of them — are already on hand. After a tree has been erected in the area, it can be easily decorated with birdseed and a variety of other foods the birds are attracted to. The seed can serve as decorative snow on a bird tree. Mixed seed poured along the tree’s branches create this effect.

Ready-made seed balls are also an easy decoration to use on the tree. Shaped as round balls or even as bells, their red ribbon hangers add color to the scene. These are available in retail stores that carry bird-related products.

Snippets of live holly and its red berries have been used in holiday decorations throughout the centuries. They work very well on edible bird trees. This is one food that can lure robins to the tree’s branches.

Part of the tree’s decorations — the favorite part — are the birds. Scatter enough mixed birdseed and black sunflower seeds over the tree, and this creation takes on life in the form of juncos, towhees, song sparrows, chickadees, nuthatches, Steller’s jays and the occasional robin. Large pinecones stuffed with suet, lard and peanut butter mixes may not be the most attractive Christmas tree ornaments but they will be the most popular ones on the birds’ tree.

Birds and traditions that include them in the holiday festivities make winter just a little more fun and add color to the scene, both indoors and out.