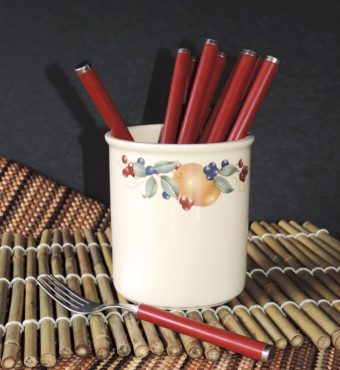 Maybe the least minded of kitchen items, yet maybe the most useful of vessels — the utensil holder. Being the least notable of kitchen devices means some design mistakes can be made.

A while back I had a blast writing about midcentury kitchen utensils. At the time, I had old kitchen utensils of every color everywhere — on every counter and display shelf at my art gallery in downtown Bremerton. During the utensil study, friends were dropping off the little gems that kept accumulating.

Tourists and visitors had a ball with them, as they used them as photo props for photos of “what we did in Bremerton” to send to friends and relatives. In the midst of this fun, someone said, “Where are the holders for these things?”

Yes, holders could be useful, I thought as I looked around and saw dozens and dozens of utensils piled everywhere. 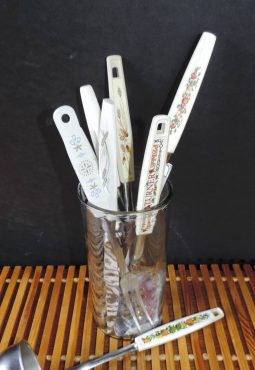 It was a natural followup — the subject of kitchen utensil holders. Not a subject anyone in their right mind would consider significant. After all, those kitchen utensil devices could be put in anything from canning jars to coffee mugs.

Since it was brought to my attention, I decided to go to department stores and thrift shops in search of utensil holders. They were there — strange devices, midheight with no side handles, kind of like a vase but maybe shorter.

Soon laughter ended, as I discovered this to be a serious subject of sorts. One gallery visitor remembered that there was always a bright yellow ceramic jar on the counter, and it held the most-used kitchen tools — the spatula, the wooden spoon, the serving fork and the soup ladle.

Off I went in search of utensil holders. First stop was Fred Meyer on Wheaton Way in Bremerton. I didn’t ask for help, just headed to the kitchen-gadget isles and walked up and down with no luck, until I saw three white holders. They were on sale and filled with colorful spatulas. Second look — mistake; the spatulas were for sale, not the holders. If there were utensil holders for sale, I did not find them. 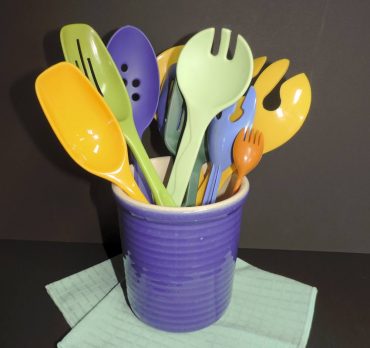 The next day I called the Fred Meyer store and talked to kitchen department representative Patti Ritter, who has been with the store for 10 years. She said that in that time, she had only seen them come in occasionally and sometimes the holders/crocks would accompany promotional dish sets. In-store there was one style, a solid-white, round crock.

I didn’t throw in the towel and figured there could be more to learn, so I hit a few department stores, but ended up shrugging. Nothing was that exciting.

Going online was another story. You want it, they got it, of course. There was a lot to be found — utensil holders in every shape and color, some with big ceramic flowers attached and others complicated with internal compartments. They were made of glass, ceramic, metal, stone, bamboo, carved wood, you name it. The price averaged $15. Thrift shops, on the other hand, were paying folks to take them. Not really, but you get the point. 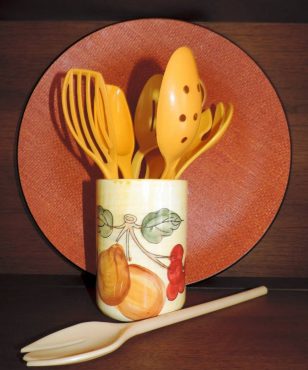 Vintage was the clincher. Apparently grandmas had a lot of those things — and those things were passed down. When asking folks what they currently used to hold their kitchen utensils, many answered, “mom’s.”

Seventy years ago, or even 30 years ago, kitchens were more colorful and the family was more in attendance when it came to food prep. Fast food from McDonalds and other places was the occasional fare, not the rule as often seen today. A salad fork and serving spoon were a natural accompaniment with a crisp salad in a big Pyrex Butterfly Gold bowl.

I seem to be relating kitchen trends to the opal-glass Pyrex era. Opal means the Pyrex bowls and casseroles have white inside, a production that spanned the mid-’40s to the mid-’80s. That is when kitchenware was dramatic, and today that midcentury modern look is a very hot decorating trend. 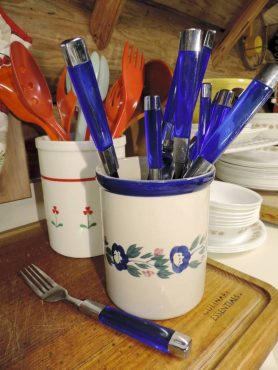 Also trendy is the minimalist white kitchen with stainless-steel appliances, lots of walking space, window lighting, open shelves and a central island that encourages social interaction and gourmet tasties. In this setting, grandma’s decorative or bright crocks filled with a mishmash of kitchen tools would look out of place, too focal. This is where design mistakes can be made.

Kitchen utensils are tools, and the tools that are used the most should be handiest to reach, even if that is a drawer. Don’t show off these workable gems. Why? They are just cooking and serving tools that usually show wear with age.

Obscurity would be the intent, so a vessel that holds utensils would be best if that holder blended well with the surrounding kitchen.

If not a neutral, white, minimalist kitchen, then go for color. If you love color and cooking, make those utensils star performers and put them in a pretty, appropriate vessel. And that appropriate holder could be a vase or a canning jar, anything you want — even a high-top tennis shoe.