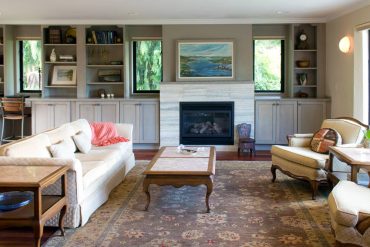 Cynthia VanBuskirk of Bainbridge Island knows that when it comes to decorating a home, objects that deserve a second chance can create an impeccable first impression. For the past 10 years, VanBuskirk has haunted thrift shops and tag sales in an ongoing treasure hunt for furniture, art and other classic and carefully chosen, preowned miscellany. Mixed with heirlooms from the familiesof both VanBuskirk and her husband, John, these encore items combine for a look that’s as elegant as it is unique. 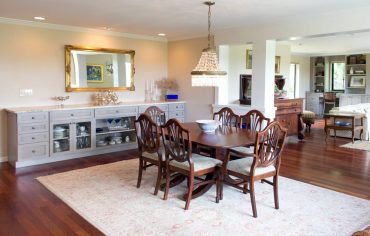 A House with Potential

Nineteen years ago, when the couple first saw the house, VanBuskirk had not yet begun her avocation as a furniture forager. Back then, they were scouring Bainbridge for a home. In just a few weeks, they would be relocating from the East Coast. At the end of the last day of house hunting, the couple found it.

Their attraction to the setting was obvious: One look at the Eagle Harbor view and they were sold. Unfortunately, the house itself — built in the 1970s — was less inspiring.

“The kitchen wasn’t very functional but our younger son liked it because the refrigerator was directly across from his bedroom door,” John says with a smile. 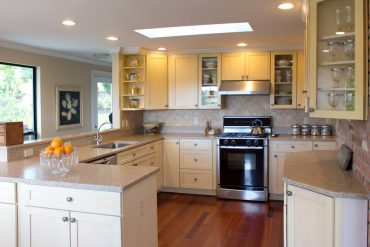 Even more perplexing, the living room was backed by a stucco half-wall behind which was a long run of electrical outlets.

“We didn’t really like the house,” VanBuskirk recalls. “We liked the view. We figured we could remodel the house.”

And remodel they did. As it happens, the view also underwent something of a remodel. Over the years, the VanBuskirks’ view of the harbor has changed from what the couple thought of as narrow “avenues” to a more cohesive, westerly view of the marina. The change outside has kept pace with the changes inside: a thorough renovation completed in four sections over many years.

One Piece at a Time

The VanBuskirks tore into the interior shortly after moving in. The first piece to receive a facelift was the basement, an unfortunate choice given the flood that struck several years later, requiring the ground floor to be gutted and begun again. 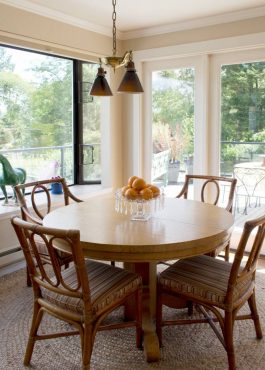 Between basement restorations, the kitchen received a major overhaul. The kitchen peninsula was relocated, cabinets were swapped out to modern maple, and a new configuration changed up the floorplan and moved the refrigerator — giving their son a longer commute to the leftover chicken. Notably, the kitchen flooring was changed to Brazilian cherry, a material that would eventually overlay floors in the entire main living area.

The final piece of the VanBuskirks’ puzzle was the dining and living rooms and the master suite. In describing the old dining room, VanBuskirk casts aspersions on a former brick interior wall that “ate all the light.” Out it went, to be replaced by a gas fireplace with a travertine surround. 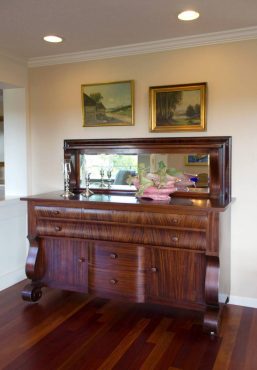 In the living room, the old stucco half-wall came tumbling down and the newly liberated back wall was filled with windows giving a view to the back garden. Between the dining and living rooms, the VanBuskirks added structure in the form of flanking partition walls with supporting columns. 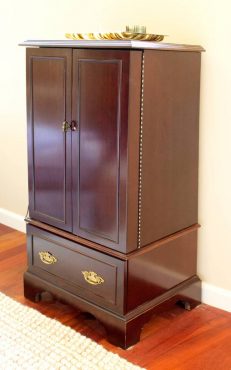 When it came to their home’s finishing touches, the couple sought the advice of Kingston designer, artist and real estate agent Diana Kingsley. She consulted on room colors, fabrics, window shades and interior details such as the travertine and the remarkable etched-glass door of the master suite. She recommended a calming beige-and-blue scheme to replace the interior’s original odd pink. The final product was a success. VanBuskirk applauds not only Kingsley’s good taste but her willingness to work within a budget.

The Thrill of Thrift

Somewhere in the midst of all the remodeling, VanBuskirk learned the thrill of thrift. It was her mother-in-law’s doing.

“John’s mom turned me onto thrifting,” she says. “She took me to the shops in Connecticut. I admit that at first I had the same reaction a lot of people do: I didn’t want to touch anything. But then I found this LeRoy Neiman limited edition print of the America’s Cup for $5. It was the first thrift store piece I bought.” 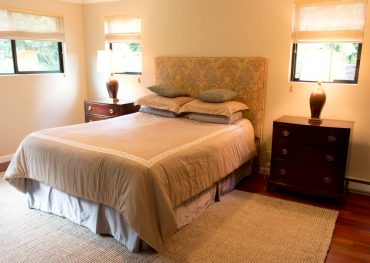 It was certainly not the last. Since that initial purchase, VanBuskirk has visited secondhand boutiques, retail nonprofits and tag sales to amass a fine and impressive collection of furniture and home furnishings. Along the way, she acquired more than just the nifty and thrifty; she developed an eye for preowned pieces with potential. Eventually, she became the manager of a thrift shop.

As a professional and an enthusiast, VanBuskirk explains her talents simply.

The thrill of the hunt is part of the appeal of decorating with thrift, as is the challenge of making the items fit in with the existing décor. Among the dozens of pieces in the VanBuskirks’ home, some have been restored or refinished while others were reupholstered with input from Kingsley. Consider, for example, the lovely chaise lounge of the living room and the vintage wicker chairs. 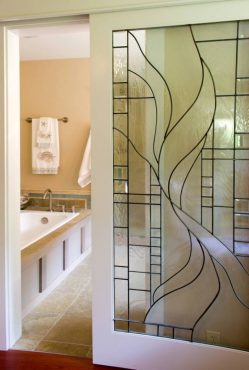 Four other chairs, these from a restaurant liquidation, have been recovered in sage upholstery. The chairs are now paired with a mahogany game table. 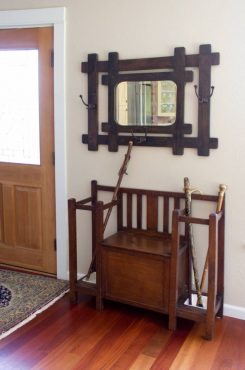 This type of matchmaking recurs several times. The trestle-legged dining room table was introduced to chairs that came from a different thrift store on a different day. In another example, the breakfast table that once belonged to VanBuskirk’s grandmother now consorts with bamboo seating.

The couple’s home proves that preowned doesn’t have to be common. Beautiful, old pieces abound, from the maple buffet and the 1920s mahogany sideboard to an arts-and-crafts oak hall tree and a marble-topped entry table. The vintage child’s church pew is a find from New England. 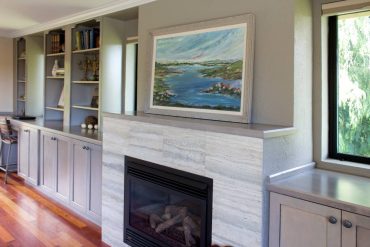 Most dear are the heirlooms handed down from their families. In the kitchen, a long, wooden spice rack hails back to one of John’s great uncles who ran an import business on the East Coast nearly 200 years ago. Another of his uncles fashioned a most amazing child’s chair for John’s father. The uncle was employed as a set manufacturer in the New York movie industry a hundred years ago. The wooden chair, crafted in the 1920s, is carved with cartoon characters of the day. 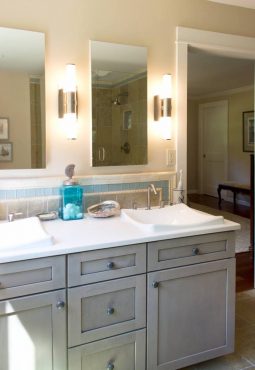 Cynthia’s family has a story to tell as well. In addition to the Limoges porcelain “pink lady” and the chandelier that she remembers from her grandmother’s house, she displays finely wrought wooden furnishings from her grandfather’s furniture company. These include a carved mirror in the master bedroom and a cabriole table with legs so graceful, it looks ready to dance away. 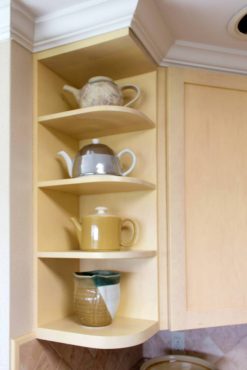 Fabulous, not famous, is VanBuskirk’s strategy. On her forays, she keeps an eye out for original pottery signed by local artists, not necessarily those who are well known. She continues her search for paintings and prints like the one that first attracted her to thrifting. Photographs are welcomed as well; a series of black-and-white prints featuring New York City in the 1940s graces the family room. VanBuskirk purchased the lovely set, unframed, for $12 at Goodwill. 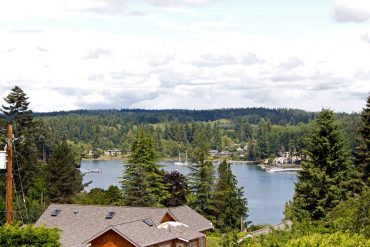 Nearly 20 years after finding the house, the VanBuskirks have just about wrapped up their passion project. They now love the home they have, from the view, to the layout, to the adornments. VanBuskirk mostly contents herself with moving the furniture they already own. Instead of — as she says — “dragging home” more things, she contents herself with occasionally replacing existing items.

“We upgrade when we find stuff better than the stuff we already have,” she explains.

Considering the caliber of the “stuff” they already have, the upgrades are few and far between, which is a tough position to be in for a confirmed thriftophile. Maybe it’s time for a summer home?