After seeing the world with the Navy, a family finds a 'forever home' along the Keyport shore.
June 13, 2016 - Featured, The Home - Comments:
Text by Wendy Tweten Photography by Tom Woltjer 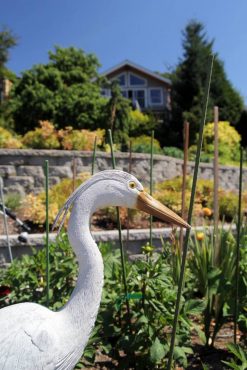 When the Butler family saw the house on the eastern shore of Dogfish Bay, they knew they had found their “forever home.” Set in a quiet Keyport neighborhood that drives like a trip down memory lane, the 2,700-square-foot home overlooks a peaceful waterfront setting of docks, tall trees and sunsets. It’s the kind of place that, once found, becomes part of the family.

Bob Butler’s career as a Navy physician had taken him and his wife, Caroline, far and wide, including three years in Japan. Now the couple and their two sons, C.J. and Nicholas, were looking to set down roots. When Bob was stationed at the Naval Hospital in Bremerton, the family moved to the Vinland area of Poulsbo and soon decided that North Kitsap, with its beautiful scenery and friendly inhabitants, was a place they could call home.

The Butlers learned about the Keyport house through friends. Their original Vinland neighborhood was a tight-knit one. When former neighbors made the move to Keyport, they suggested the Butlers tour a nearby home that had just come on the market. Even though the Butlers already owned a property intended as the site of their forever home, they immediately fell for the roomy Keyport residence and its lovely views. It turns out, they were not the last of their group to fall for Keyport’s charms. 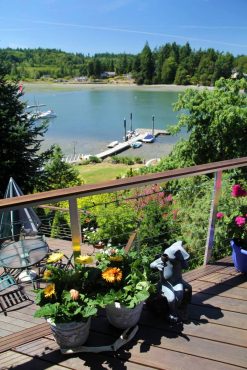 “Two other families have moved to this area,” Caroline says with a smile. “Our goal is to have everyone from the old neighborhood living here.”

Although the Butlers knew they had come home, they weren’t ready to move in just yet. The house was of late 1970s vintage and needed some renovation. Fortunately, they could live in their Vinland home until the project was completed. 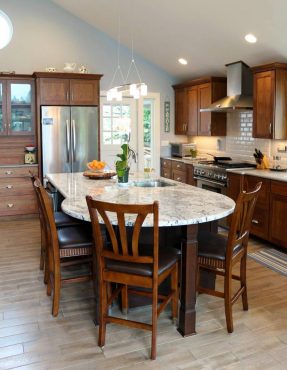 Upon recommendations from friends, the couple hired Pristine Homes of Port Orchard to do the job. Not only did Jim and Jeff Way of Pristine do impressive construction, they worked out the design with input from the Butlers.

“We didn’t even have to hire an architect,” Caroline says.

The first requirement was to raise the ceilings and open the view. The original 7-foot ceilings made 6-foot-tall Bob claustrophobic. As the roof was raised and pitched, a second level of windows brought the sky into view. A row of windows added to the south wall of the great room were set high off the floor to add light while retaining privacy. Natural light was a must-have for Caroline, a San Diego native who loves the Northwest but has no illusions about its long winters and overcast springs. 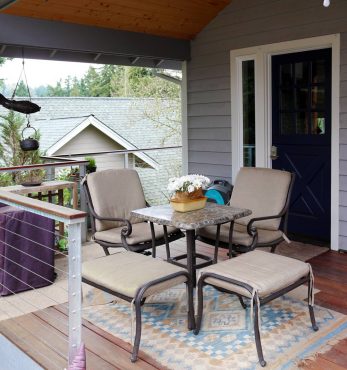 Next on the list was the kitchen. Bob’s hobby is cooking. Caroline is his enthusiastic sous chef. She describes their lives as revolving around the kitchen. As the remodel began, the couple spent most of their time designing and researching their perfect cooking quarters. The first order of business was to remove a pointlessly confining wall to create a great room that opens directly at the entry. This entire living area now shares in the waterfront view.

The existing kitchen peninsula was replaced by a grand prep island. As beautiful as it is useful, the island was designed to look like a piece of furniture, related to but distinguished from the surrounding cabinetry. Like the cabinetry, it is crafted of black walnut.

Metal reinforcements were installed to support a massive, seamless, white granite slab countertop that overhangs at one end for seating. The island serves as a centerpiece for the couple’s cooking parties, at which the guests are invited to join the prep work. For help designing their cabinetry, the Butlers appreciated the expertise of Bayside Cabinets of Poulsbo. 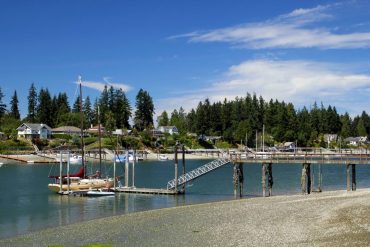 The Butler family loves the outdoors. So a big piece of the remodel involved outdoor living. The existing decks were replaced with weather-resistant ipe lumber. Railings were swapped out to view-friendly, marine-grade welded metal posts with thin cable rails. A covered morning porch was constructed at the east side of the house, just off the kitchen.

The west-facing, dual-level decks are a toasty microclimate that can register 20 degrees warmer than surrounding towns. These decks are a destination for Bob and Caroline’s dinner parties, family gatherings, Young Life events and Fourth of July celebrations. 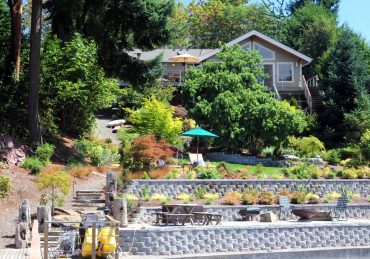 The final piece of the remodel was an important one: The Butlers wanted a forever home, and that meant looking to the future. Although the home was not designed to be ADA (Americans with Disabilities Act) compliant, certain concessions were made to ease access. The home is adapted to single-level living on the main floor, with the exception of the laundry, which resides at the basement — a.k.a. “kid” — level. Showers are “curbless,” with flooring from antiskid pebbles, reducing the danger of slipping and tripping. 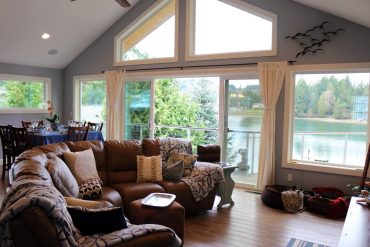 Work on the house began in August 2013 and ended nine months later. As the construction unfolded, the Butlers pursued a style based more on comfort than formality. The final product was a passion project with a visual richness that belies its unpretentious atmosphere.

To achieve this end, the couple visited home shows and internet sites. A college roommate of Caroline’s, now an interior designer, suggested the Krypton gray-blue that covers the great room walls. Caroline brought several elegant elements to the project, including softly reflective, subway tiles behind the range, as well as thick window wrappings and tall baseboards in main living areas. 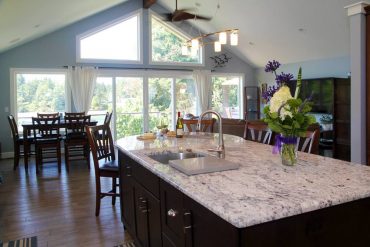 In May 2014, the family moved in. Among the family heirlooms and memorabilia that came along are several paintings by Caroline’s father, a hobby artist. Among his works are a portrait of Gypsy Rose Lee in the master suite and a whimsical bird mosaic.

Caroline’s childhood water skis are mounted on the basement landing. Her mother’s beaded purse is shadowboxed on the hallway wall, near family reunion photos of both Caroline’s and Bob’s extended families. In the great room, tansu chests and a hibachi repurposed as an end table are memories of the couple’s time in Japan. 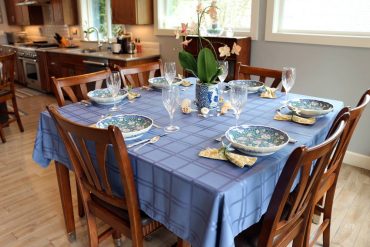 Life is good on the water. The Butlers put their dock to frequent use, especially in the summer, when their ski boat is close at hand for tubing and wakeboarding. Bob takes advantage of the bay’s warm, shallow water to cultivate specialty oysters. Grown in bags tied to the dock, the gourmet harvest of Olympic, Pacific and Kumamoto oysters has been the main course of many dinner parties.

From home-grown bivalves to naps in the portable hammock, for the Butlers, there’s no place like their forever home.

“Every morning, we wake up and wonder when checkout time is,” Caroline says. “Summer or winter, the view never disappoints. We always wanted to live on the water.”