Harmony — Between Home, Forest and Beach 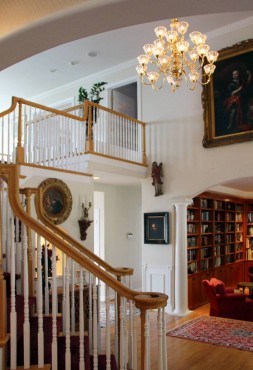 Tucked away outside Poulsbo, a multigenerational home comes together with vision and several lifetimes of collections. What each family member brings to the property creates an unexpected combination of the natural beauty of the Pacific Northwest and the old-world culture of Russia and Europe.

The driveway rolls through a gently tended 5-acre forest. Head-high stumps and waist-high ferns cover the forest floor, and birds of many feathers swoop from low cedar branches. A magical peace enfolds you as you leave ordinary time behind.

From the dim forest, the driveway arcs into a bright circle. Japanese maples shelter the home’s windows, but tantalizing snippets of Hood Canal sparkle through from the back windows. The beveled glass doors, guarded by life-sized brass jaguars, welcome you into a grand foyer that confirms you have, indeed, entered another time.

A stately staircase rising two stories to a bridge above deserves a glance, but your attention is riveted to the walls, which are covered in ornately framed Old Masters’ oil paintings from Russia and Europe. 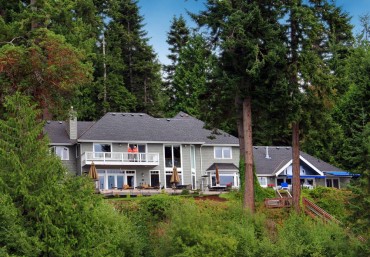 In the library to the right is a glowing portrait of Catherine the Great that dates to the 18th century. Smaller landscapes grace the coffered dining room and ancient Russian icons hang close enough to touch — but a lifetime of museum etiquette tells you not to. The “middle” generations’ contemporary art and statues create a vivid contrast to the master paintings and underline the home’s modern sensibilities.

The foyer’s majestic aura flows into an informal dining room. Cathedral windows there frame an equally majestic view of Hood Canal and Olympic Mountains. You’re magnetized to the deck, feeling like your fingertips could touch the snowy peaks if you only move a step closer. The owners laugh at this kind of reaction, saying, “We know. We never tire of this view. And it’s constantly changing.” 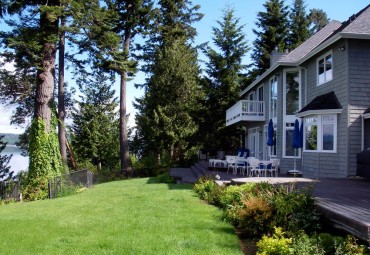 Because of the extraordinary view, the family hangs out on the tiger-wood deck all year with the aid of gas tables and heaters. Eagles nest in an old-growth cedar and entertain them in the spring as they teach their eaglets to fly.

Beach-combing jaunts turned into day trips when they had their boat anchored in the deep-water just off shore. This is what sold the gentleman on the house. “With my boat at hand, impromptu outings were oh, so easy,” he says.

A walk through the rehabilitated forest finds “Mr. Owl” tagging along, whoo-ing all the way. The wife unearthed the serenity of the forest by cleaning out years of debris and odd objects. She collaborated with Sean Anderson, a 19-year-old arborist, on a mossy, meandering path with a small bridge. Her goal: Make the forest with all its wildlife and birds accessible to people, too. 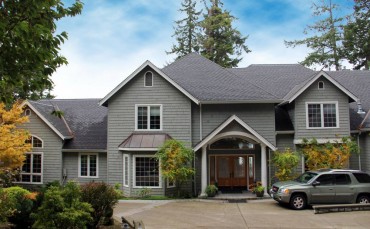 The interiors received a remodel in 2004 that took a standard home and made it sing. The wife took the role of lead designer with her husband, an avid photographer, lending his artistic eye. The owners say the rebuild was “tough going” until Neiman Construction came aboard.

The house remodel added much needed architectural details. Custom cherry cabinetry and mantles elevated plain fireplaces in the family room and library into classic focal points more in line with the art and view. Built-in cherry bookcases line the library, which received wainscoting (as did the dining room). 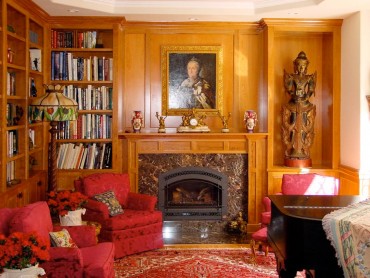 All floors, except the marble in the foyer and master bath, are oak hardwood, providing a gracious backdrop to the family’s collection of oriental carpets. With the remodel also came high-speed wiring in the private office and media room.

They changed standard kitchen cabinetry to cherry wood. Countertops were dressed out in slab granite, appliances were upgraded and a wine cooler and a steaming oven were added. Entertaining on a large scale is now an absolute snap.

The master bathroom spa had a touch-up in the first remodel but recently received an upgrade. A large, snazzy shower with glass bricks, a waterfall drain and two shower heads set to his-and-her temperatures add a daily delight. A soaking tub reigns in front of a two-sided fireplace overlooking the ever-present panoramic view. 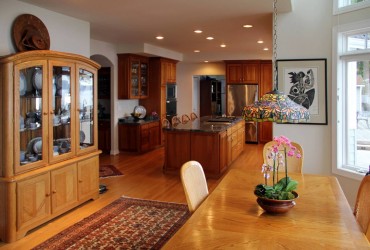 The property’s original cottage, which attaches seamlessly to the main home, serves as the home of Kyra P. Wayne, the first generation of this three-generational family. The cottage needed a floor-plan change. Running the width of the building is a living room centered around a marble-faced Georgian fireplace. A working study and spacious bedroom suite completed Mrs. Wayne’s apartment.

Her presence in the home is miraculous. She was born in Russia on the edge of the Bolshevik revolution of 1918, and her mother and aunts danced at balls with Czar Nicholas II. As a musically gifted child, she attended The Leningrad Academic Cappela, studying music, dance and acting. After World War II, she received military medals as a skier and sharpshooter, married an American diplomat and moved to the United States. 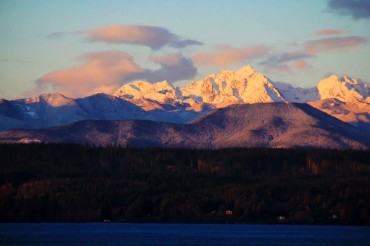 Mrs. Wayne, an award-winning author, settled into her wing, and at age 85 launched into another book. She delights in her last grandchild, Kyra, one of the five “young” generation members. Kyra, a preschooler, explained her name: “My grandmother is named after me.”

With the younger generation grown and Mrs. Wayne reaching her 97th birthday, the couple in the middle recognize that their time on this magical property is drawing to an end this year. As for the older generation, Mrs. Wayne says, “I’ve lived a full life and I’m grateful for it.”

In a traditional toast, she proclaims, “Za vashe zdoroviye — to your health!” and downs an ice-cold vodka shot then shatters the glass on the hearth.