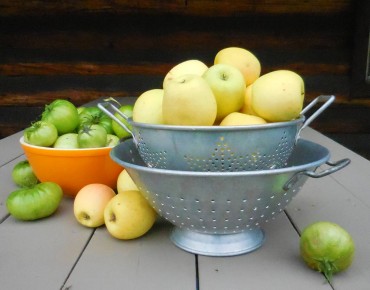 The elephant in the room, or in this case, a hundred elephants in the room — a bowl. Everywhere and all the time, there is no shortage of these utilitarian items that have one calling — to hold things.

Dictionary defines bowl basically as something round with a hollow part. In most cases, these obvious delights go unnoticed and are not really appreciated lest for their task intended.

The small bowls to the family’s fine china, the serious antique collector’s bowl finds or the potter’s creations boast merit, but in general a bowl is a bowl, is a bowl. Today, China provides an inexpensive bowl-buying platform, downsizing and smaller living trends toss aside the towering stacks, and any thrift shop anywhere has tons of the stuff. 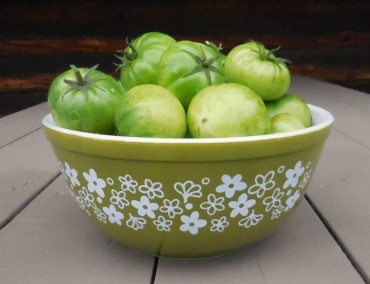 The initial bowl research was difficult because the subject is so vast and clarity of definition expansive. Most research found definitions were referring to small bowls — for soup, salad, cereal and single party use. I was interested in looking at a big-bowl topic.

It was a struggle to get beyond the small, personal size, as I would have to clarify by calling them mixing bowls or serving bowls. But that brought up interesting social theories. A big bowl is generally for family or groups. Its purpose is for multiples or holding that which is gathered for later use for families or groups.

The oldest recorded clay bowl is 18,000 years ago. The bowl was to collect, store or cook foods as humans turned to agriculture to produce food. Going way, way back to maybe some 100,000 years ago, there is evidence of abalone shells or animal skulls being used as bowls. 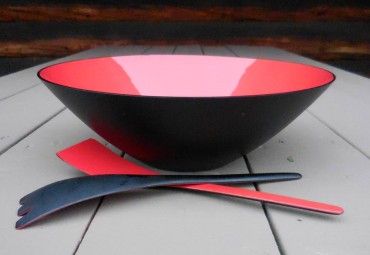 In this day and age, we think of a big kitchen bowl as a vessel to hold display items such as fruit or nuts, to hold and mix something or to use and serve food for a group.

Nesting bowls or stacking bowls were usually sold as sets of three or four. The bowl sets are not produced so much any more. I would suspect one of the reasons is due to preprepared foods that don’t take mixing and complicated preparation.

Another factor is that young professionals are staying single longer, and with the high cost of living, many have small living accommodations that do not merit large work kitchens. Also the downsizing baby boomers are finding less need for a romping herd of bowls that once served a growing family.

The definition of fine art and craft often enters the picture, as well-meaning artists present gorgeous, decorative, large vessels as fine art, whereas the shape and category declares it be utilitarian. 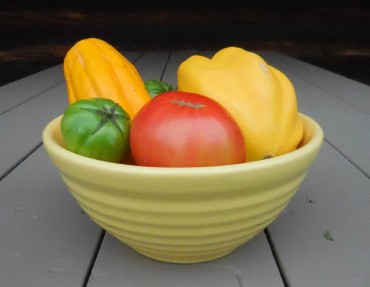 Utilitarian means is has the potential to be functional. Fine art is in a category where the product is viewed or enjoyed for itself alone without the capability of practical use. A drinking glass, for example — the name says it all. It may be crafted with parts and ornate designs but as long as one can drink from it, voila! — craft.

Having had the Pyrex Museum for 10 years and with thousands of visitors, the subject of bowls is right up my alley. There is a saying, “I never met a bowl I didn’t like.” Oh, how true, as I encourage folks to get those wonderful bowls out of the cupboards.

Pyrex introduced a multi color mixing bowl set in the mid ’40s simply called “Primary Colors.” It was a graduating set of four — blue, red, green and yellow. The set was produced until 1968. 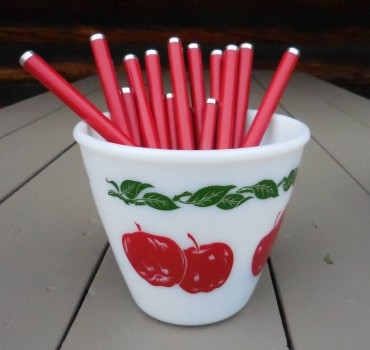 The four-quart yellow bowl is the largest of the four-piece set. Many visitors noticed and mentioned that yellow bowl the most. Many shared their memories as to what the bowl held — most mentioned was potato salad, cookie dough, salad or popcorn.

I remember one story in particular. Over the 10 years, I filmed and created more than 50 half-hour shows, capturing many visitors as they told their Pyrex bowl stories. One fellow showed me a scar across his wrist.

“Pyrex did it,” he adamantly said. “I was a teenager. Every Saturday, we’d have popcorn in the big, yellow bowl until it accidentally broke and while smashing down the pieces in the trashcan — whoops, a big piece cut my wrist. I was taken to the hospital to get stitched up. The next day at high school, the police showed up to confront me, as they were told by the hospital that they suspected I was trying to commit suicide.”

For the most part, the subject of bowls is a tame one. As previously stated, there is no shortage. As definition goes, they hold things, as simple as that. Large bowls are a beautiful shape, and at least one should be out for kitchen display, especially if it has been handed down in the family. A charming vessel that holds things — it just might be holding memories to share.