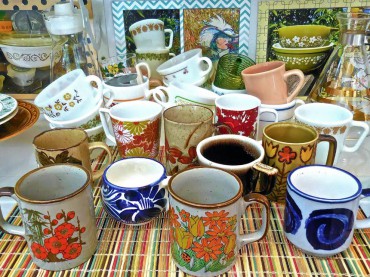 Dime a dozen, can’t throw them away fast enough — mid-century coffee cups sprout up faster than spring field daisies. Or so I thought.

It is night and day. Seems like a month ago they flooded thrift stores, and antique shops wouldn’t waste shelf space for the little old misunderstood gems.

I have tons of cups. Who doesn’t, laughingly said, but recent search has been disappointing. Maybe the word shouldn’t be “disappointing,” for fewer cups on the secondary market may well mean that a new appreciation has surfaced, and that is a good thing.

My study target was coffee cups from the 1970s, the time when saucers were put aside and small, mug-shaped vessels stood alone and were called coffee cups. They were primarily made by U.S. companies or in Japan, and most were considered casual. 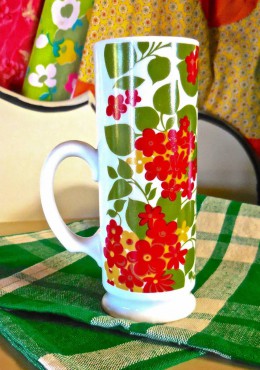 To appreciate these coffee cups, one needs to understand the times that welcomed the ’70s, for this began the end of the Vietnam War, the Beatles broke up and the world was set on an avocado-green shag rug (or was it gold?).

The ’60s liked coffee and the hostess social aspect with streamline carafes and hostess trays, but the ’70s brought a heavier thought and living process. Colors were earthy, casserole dishes were readied for block parties and coffee was accommodated with bigger mugs (but not the giants seen today).

Pyrex was extremely prevalent in the ’70s, accentuating the gold-and-green trend on its cookware and cups.

Having the Bremerton art gallery with many visitors, I began a survey pertaining to old coffee cups. I asked folks if they have old coffee cups in their cupboards and what old cups they use.

The first was a visitor from Philadelphia, a senior lady who had recently downsized. This brought to mind the aspect of downsizing, a current scenario where baby boomers are ridding themselves of accumulative items. 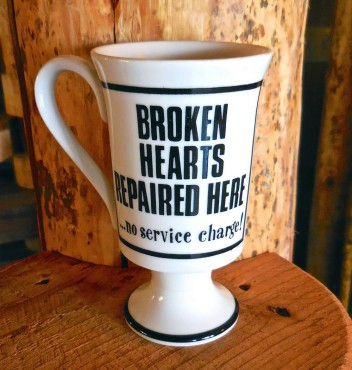 But still, this gal said she loves old cups, and she and her daughter will always look for them. “I may not have as many now to select from,” she said, laughing, “but every morning, I select a different cup, so as to give all the cups a chance.”

Bremerton resident Richard Peplinski said they have lots of old coffee cups, probably 40 on the back shelves. “We randomly select from four cups that sit up front,” he said.

“Then why do you keep all the unused cups that take up space?” I asked. Richard’s answer brought up other significant points.

“They’re sentimental to me — souvenirs — or match some other dish sets,” he said.

I asked my friend, Tommy, if he had an old coffee cup story. Being a bartender at Bremerton Eagles, I assumed if anyone has a good story, it would be a bartender. Without hesitation he said enthusiastically, “I knew this old guy at the auto parts store who never washed his cup for 60 years, and it was jet black.” 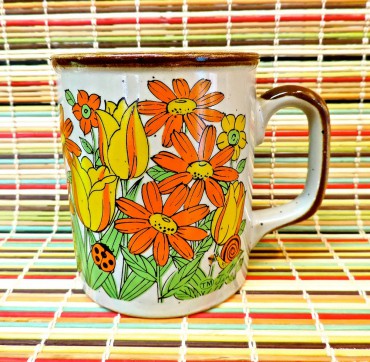 Sixty years puts the cup older than my target range, and should I be quoting a bartender? But a fellow nearby supported Tommy’s story. “It’s a sailor thing,” he said. “In the Navy, you don’t wash your coffee cup.”

Continuing the subject of late-midcentury coffee cups, of some 50 folks interviewed, the consensus was across the board: The old ’70s cups may have a mug shape, but they are too small for today’s coffee consumption demands.

The midcentury modern is a love-hate scenario; folks hate that era or are crazy in love with it. No grandmother is going to discard a cup that says “I love my grandma,” and same with love cups. Souvenir cups are a must to keep, for they signify some kind of proof you were there way back then when one was younger. 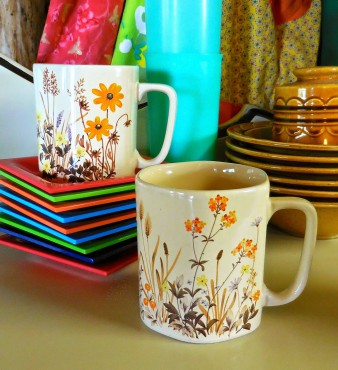 Some have said that many of the older cups have smaller handle space for fingers. Others commented on the then popular footed-base cups not being as stable as today’s oversized coffee cups. Many happily said they select a cup on how they feel that day, while others firmly use the same cup year after year as if not to disrupt routine.

Shelly Wilkerson, owner of Crazy Lady Gallery in Port Orchard, said she has always liked cups and mugs made by local potters. In fact, she still uses a coffee cup made by a family member and given to her when she was 6 years old.

I personally often color theme table settings and kitchen areas, and cups are great accent imagery tools as well as being utilitarian.

Maybe vintage cups are no longer a dime a dozen, but these often unappreciated beauties are still easy to find, around here anyway. Pyrex enthusiast Susie Smith Martin in Crestview, Fla., said that she never sees them anymore in thrift shops.

It is also trendy these days to “unmatch,” use different cups and drinking glasses.

Like wild flowers in a field, all special and different in their own way, so goes the arena of midcentury coffee cups.