A Forever Home on the Beach 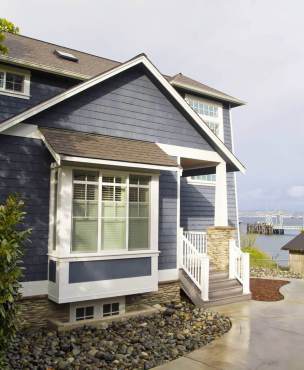 When Cara and Patrick Ryan bought their 0.3-acre waterfront property in Southworth in 2000, they fell in love with the relaxing atmosphere. Living in Seattle and using the home as a weekend cabin, the couple knew that eventually they’d want to retire there.

“It’s peaceful here; we love it,” Patrick Ryan says. “One hour of the quality of relaxation here is worth four hours in the city.”

Several years ago, the Ryans decided it was time to move to Southworth full-time — but before they did, they had a vision for a “forever home” on the property, a coastal seaside house that took advantage of the sweeping views.

The couple hired Joe Gates Construction after reading an article by Joe and Judy Gates in a local publication, and Gates introduced them to Poulsbo architect Bill Gaughran of Traditional Home Designs. It took 18 months to receive permits because the property is in a critical area and allows for a limited footprint — but the result is remarkable.

The 3,400-square-foot, three-story home caters to the Ryans’ lifestyle and their vision for a maritime style. Specially slanted exterior and interior walls and windows give the home a lighthouse look.

Features such as river rock used on the fireplace and on the outdoor skirt siding create cohesiveness to the coastal style inside and out. Even the detached garage, which will be ready this fall, will extend the theme with a cupola and weather vane. 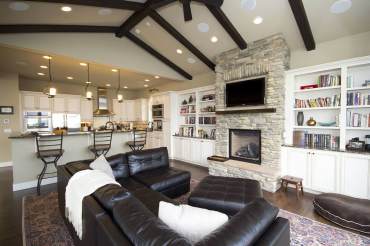 The exterior color, Sherwin Williams’ sea serpent blue, complements the nautical look, and has received raves from visitors. It’s perhaps the most adventurous color used in the home’s palette — the couple wanted to be conservative so they used colors they would still like 10 years from now.

The home includes two guest bedrooms in the basement and on the main floor, a media room and a home office for Patrick. A great room on the main floor takes advantage of the views while also bringing the outdoors in — both the dining area and the living room open into the spacious deck. At 1,000 square feet, the deck is not only a place to entertain guests in the summer, but also the Ryans’ favorite spot. 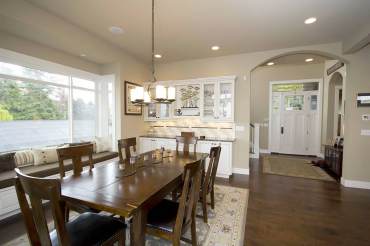 The deck took quite a bit of work because of its size and it serves a dual purpose.

“The deck size and shape helped camouflage the unattractive and large septic system,” Granlee-Gates says. “It took significant engineering but it’s such a great spot on the property, it was worth it.” 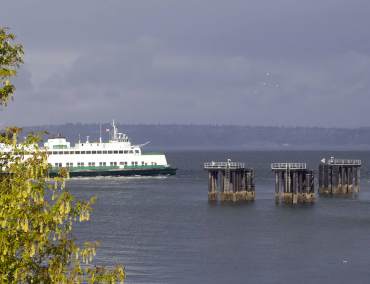 The property, which stretches all the way to the Puget Sound beach, has a front-row view of the Southworth-Seattle ferry dock, as well as sweeping views of Seattle (including the Space Needle), as well as Blake and Vashon islands and even a small slice of Bainbridge. Sights of cruise ships and sail regattas are not uncommon, and neither are seals and eagles.

That view is particularly magnificent from the master bedroom on the top floor. Even the large shower has a view of the water. The master bath provides a true retreat — a jet tub and a fireplace add to the spa-like feel, and relaxing music can be played through the wired-in speakers. 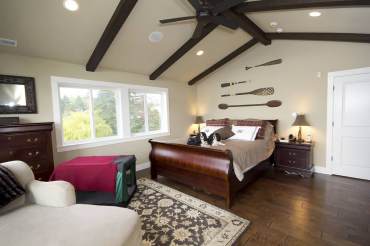 One unusual feature is the height of the bathroom vanity, as well as the kitchen counters. They’re raised by 4 inches, to net 40, to accommodate Patrick’s 6-foot-5 height. All the features were selected to suit the couple’s lifestyle, from the double oven (a must for entertaining) to the maritime décor such as paddles on the master bedroom wall.

“We wanted a place that would be traditional and stand the test of time,” Cara says. “We plan on retiring here and we tried to build with that in mind.” 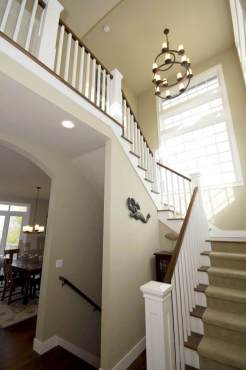 The Ryans, especially Cara, were hands-on during the design process, selecting the materials and finishes themselves. For example, Cara likes an eclectic look so she shopped for granite remnants (which also saved costs). Details such as French doors and handmade tile splash create a quiet elegance that complements the couple’s minimalist décor, inspired by years of urban living.

“We lived in condos where floor space was premium so we tried not to clutter this space,” Patrick says.

Their intimate involvement in the design process gave Cara and Patrick a better appreciation for their home.

“We got to pick out everything and gave it a lot of thought so it’s meaningful to us,” Cara says.

The couple may be years away from retirement but they’ve been enjoying their quieter, rural life.

“We are blessed to be here,” Patrick says.